Cagliari need points and they don't have a bad record against Torino in recent seasons but we're expecting a tight and tense 90-minutes in this Serie A clash.

We're not expecting many goals in this game as four of the last six meetings between the pair have produced under 2.5 goals. Under 2.5 goals have also been scored in three of Cagliari's and three of Torino's last six outings, so there is a good chance that this game will be low-scoring as well.

In terms of a final scoreline, we believe that a 1-1 draw is more likely than the game ending goalless. The last three draws between Cagliari and Torino have produced under 2.5 goals and two of those ended 1-1. Both teams have a goal in them and their defences haven't exactly shined this season, so a 1-1 draw makes the most sense.

Everything you need to know about Cagliari vs Torino

Can Torino end their poor away on Monday night?

Cagliari held Verona to a goalless draw in midweek, not a bad point for the struggling side. However, they remain in the relegation zone heading into Monday night's clash with Torino and could really do with a win to lift their spirits as was a couple of league positions. Relegation is a real possibility for Cagliari but they do have goals in them which is always something a team can build upon. João Pedro has scored 8 times in Serie A so far this season and Cagliari will be hoping he can fire them to safety.

Torino will certainly be disappointed not to have beaten Emploi last time out, after going two goals up in the game. Pobega opened the scoring after just 10-minutes and Pjaca made it 2-0 5-minutes later much to the joy of the home fans. However, Empoli pulled a goal back before the break and this seemed to affect the way Torino played in the second half. Emploi went on to equalise with 18-minutes left on the clock and the scoreline ended 2-2.

Cagliari: Godin, Walukiewicz, Rog and Ladinetti could miss this weekend's game due to injury. 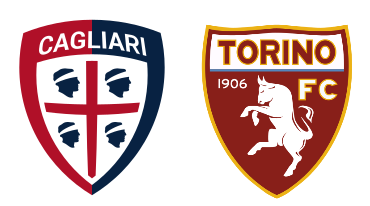