Serie A's bottom club are in action this Sunday as Cagliari look to get their first win of the season at home to a Sampdoria side that have also endured a disappointing start to the campaign.

Here are our predictions for Cagliari vs Sampdoria.

Cagliari are yet to win a single one of their opening seven games this season and we're backing that winless run to continue at home to Sampdoria on Sunday. The visitors have picked up two wins and a draw from their last six games against Cagliari and sit 3pts clear of their hosts in the Serie A table. The visitors have only lost two of their last five league games and they were against title-challengers Juventus and Napoli.

This is a fixture that usually produces plenty of goals and we're backing both teams to get on the scoreboard this weekend. Both teams have scored in three of the last five meetings between these two clubs, while four of Cagliari's and four of Sampdoria's last six outings in all competitions have also witnessed both teams scoring.

All you need to know ahead of Cagliari vs Sampdoria

Before the international break, Cagliari played host to fellow strugglers Venezia where a goal in the 19th-minute from Balde looked to have been enough to win the game for the home side. However, in stoppage time Busio equalised for Venezia and silenced the home faithful. Cagliari have now only picked up 3pts from their opening seven matches and have a goal difference of -8, which doesn't bode well for their survival chances.

Last time out, Sampdoria played out an exciting 3-3 draw at home to Udinese, a game that the hosts really should have won on the balance of play. Udinese took the lead in the 15th-minute but an own goal from Larsen brought Sampdoria level. However, Beto made it 2-1 to the visitors before the break and Sampdoria needed a 49th-minute penalty from Quagliarella to equalise for the second time. Candreva put the home side in front with 21-minutes left on the clock but Sampdoria couldn't hold on to their victory and conceded a late Forestieri goal to make the final scoreline 3-3. 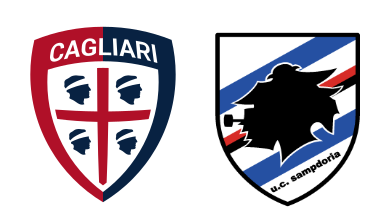