Cagliari secured a decent draw at Lazio over the weekend but are still searching for their first win of the new Serie A season. Empoli provide the opposition on Wednesday night but despite beating Juventus last month, they have lost three of their opening four matches and look low on confidence after suffering yet another defeat against Sampdoria on Sunday.

Here are our predictions for Cagliari vs Empoli

Both teams have scored in three of the last five league meetings between these two clubs and we're expecting more of the same from the pair on Wednesday night. Each of Cagliari's last five fixtures have ended with both teams getting on the scoreboard, while four of Empoli's last six outings have also seen both teams score.

Over 2.5 goals have been scored in three of the last six encounters between Cagliari and Empoli, and we're predicting another action-packed 90-minutes between the pair. At least three goals have been scored in each of Cagliari's last five matches in league and cup, while five of Empoli's last six outings have also witnessed over 2.5 goals being scored.

In terms of a final scoreline, we're backing Cagliari to secure their first win of the season by two goals to one. The hosts have scored two or more goals in their last two home games against Empoli and failed to keep a clean sheet in both of those matches. Cagliari have also scored exactly 2-goals in three of their opening four matches this season but are also yet to keep a clean sheet.

All you need to know for Cagliari vs Empoli

Can Cagliari secure their first win of the season at home to Empoli?

Not many gave Cagliari much of a chance of leaving Lazio with any points but the visitors almost left with a victory. Immobile put Lazio in front on the stroke of half-time but early in the second half Pedro equalised for Cagliari and just after the hour mark Balde put the away side 2-1 up. However, Cagliari couldn't hang on and eventually conceded an equaliser 7-minutes from time.

Empoli's only 3pts so far this season arrived away at Juventus, but since that excellent result, Cagliari have lost their next two games, both at home, and sit 16th in the table. Last time out, Sampdoria ran out comfortable 3-0 winners at the home of Empoli, leaving the home side under no illusions as to how tough this season is going to be.

Empoli: Riccardo Fiamozzi is the only injury concern for the visitors.

Cagliari vs Empoli – Your Questions 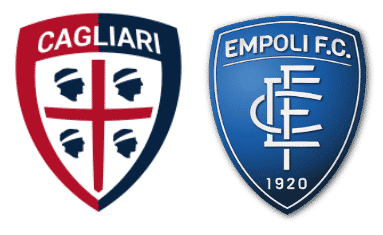