The Foxes were able to sign the in-demand Youri Tielemans to a permanent deal and managed to land Dennis Praet, an Arsenal transfer target, for just £18million from Serie A side Sampdoria.

But perhaps Leicester's best piece of business was replacing Harry Maguire without spending a single penny.

The England centre-back left for Manchester United late in the window for £80million, a world-record fee for a defender.

Other clubs in a similar situation blow the money before the transfer window closes. Leicester, however, already had Maguire’s replacement at the club: Caglar Söyüncü

The Turkey international arrived at the King Power Stadium last summer in a move reported to be in the region of £19million. He spent the best part of the 2018/19 season as an understudy, able to acclimatise to the rigours of the English top-flight without being in the spotlight. It’s a luxury very few have and one he’s certainly benefitted from.

Söyüncü has started this season in fine form alongside Jonny Evans at the heart of the Leicester defence. In their four matches, they’ve conceded three goals and their expected goals against total is just 3.25, the second-lowest in the league.

It’s somewhat naive to read into stats at this stage of the campaign but the lack of overperformance suggests this apparent solid defence is fairly reliable.

Brendan Rodgers’ men have kept just one clean sheet – in the season opener against Wolverhampton Wanderers – but have conceded just one goal in each of the following three matches. The standard of opposition needs to be taken into account, of course, but Chelsea, Sheffield United and Bournemouth are all sides that know where the back of the net is.

Söyüncü was always destined to be favourite of the former Celtic manager. He's exactly the type of defender Rodgers likes. He's dominant in the air, comfortable on the ball and powerful over the ground.

Rodgers spoke about the ex-Freiburg centre-back in April: “He is a young lad who has come in and I know he played in some of the cup games early on but perhaps things haven’t quite gone for him as he would want, but I have found him a really good boy who wants to learn.

“He is strong and aggressive, but he hasn’t had a lot of game time. He is adapting. It is a different game in the Premier League and he is adapting to it.” 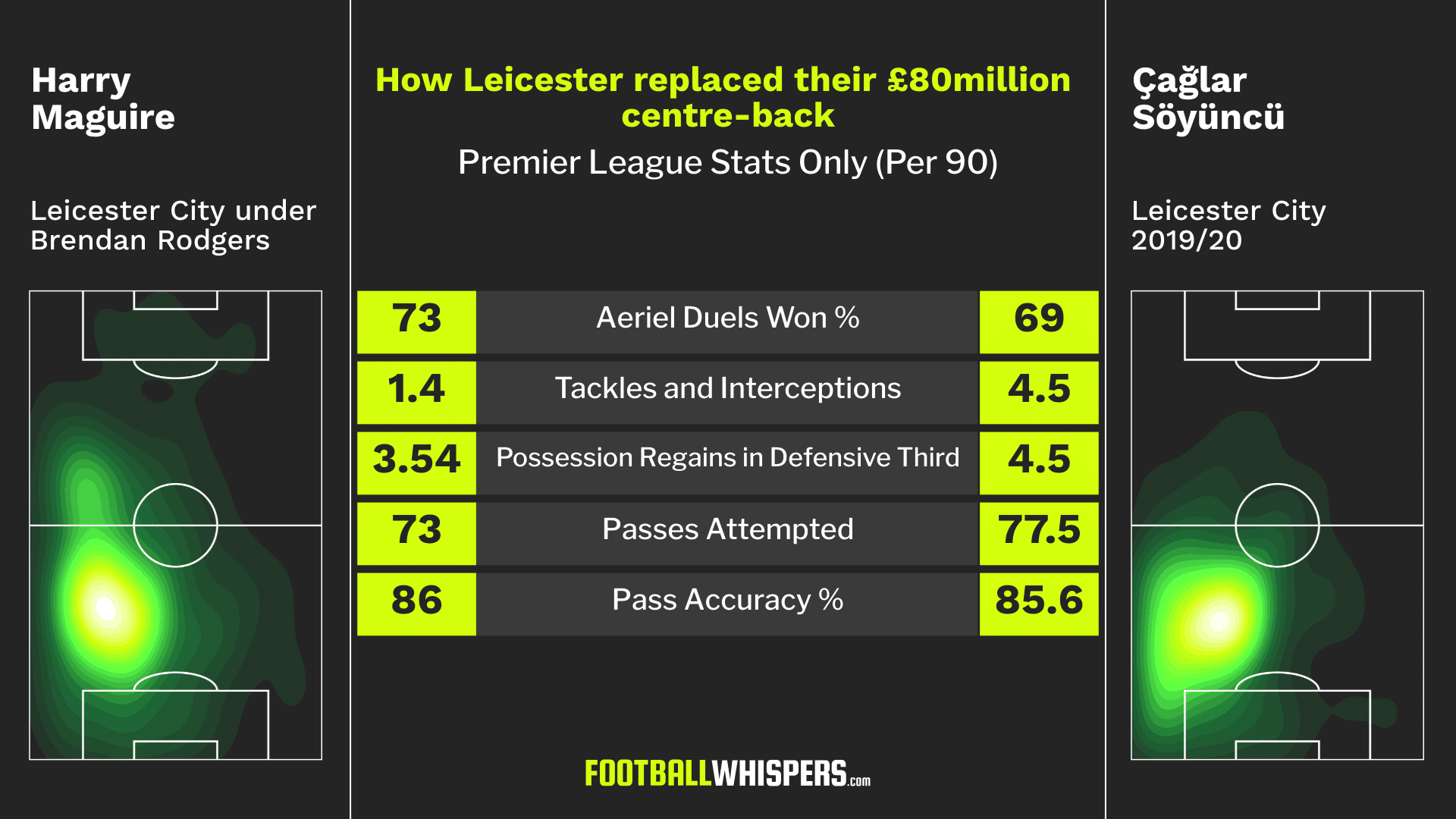 The biggest shock, however, is probably how easily he's replaced Maguire in the starting XI. Again, the fact it's only been four matches needs to be reiterated but his numbers are eerily similar to the England international.

Söyüncü is winning close to 70 per cent of his aerial duels, just four per cent fewer than Maguire averaged during his time under Rodgers. The Turk is much more proactive and has attempted 3.1 more tackles and interceptions per 90. Both players, meanwhile, regained possession over 3.5 times in the defensive third, highlighting their intelligent reading of the game.

The pair attempted a similar number of passes, too. North of 70 on a per 90 basis, they completed 85 per cent of them with over 30 per cent of them going forward. Not only are they heavily involved and key to building attacks, but they're also frugal in possession and rarely waste a pass.

The 23-year-old has settled into life in Leicester's starting XI well. He's going to come up against tougher opposition but he seems adept at coping with different players.

If Söyüncü carries on improving it won't be long until the club are fielding calls from Europe's elite over another £80million defender.