Though Leicester City are insisting right up until transfer deadline day that they will not be selling Harry Maguire to Manchester United this summer, their moves in the transfer market suggest they half half an eye on preparing for life without him

José Mourinho’s side have been linked with a number of centre-backs in this window, with Maguire’s World Cup exploits putting him at the top of the list, but also in the top price range.

Leicester have demanded a world-record fee for a defender for the player they signed from Hull City for £17million last season. If they get anywhere near that price it will cover most of the money they’ve shelled out on transfers this summer.

One such transfer has been that of experienced Premier League defender Jonny Evans, who could be seen as a direct replacement for Maguire. Despite turning 30 earlier in the year, Evans still has plenty to offer, and was linked to clubs in the top six including a return to United, before signing for Leicester from relegated West Bromwich Albion.

Evans could slot straight into the back line, but the club are looking to strengthen further with the signing of Turkish defender Çağlar Söyüncü from Bundesliga side Freiburg.

The 22-year-old’s stock has been on the rise since his first international call-up, and only increased further when he moved to Germany from Turkish second division side Altınordu in 2016.

He’s seen as a long term solution in the centre of defence for the Turkish national team, and the fee of up to £19million reflects his growing stature in the game. 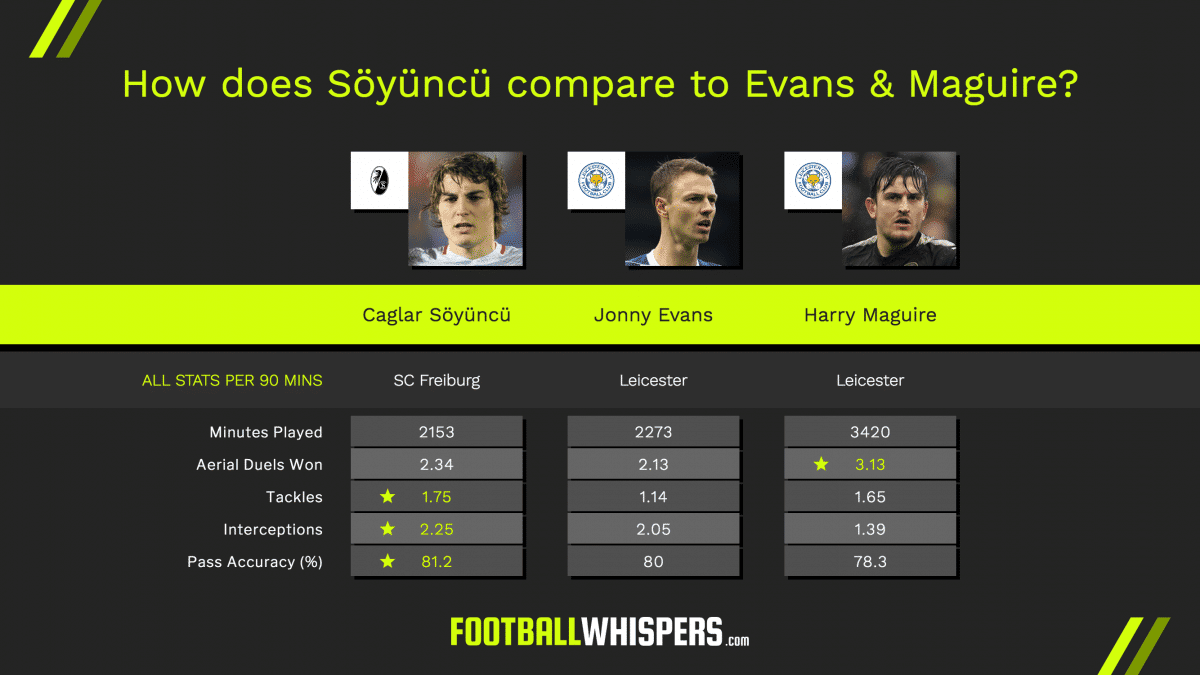 He is a fairly two-footed player but is primarily right-footed, so like Evans he could slot in on either side of the defence. A brand new Söyüncü-Evans partnership would not be out of the question.

He has a good range of passing and is able to play out from the back if needed. Some of his combative, proactive defensive play may remind Leicester fans of Maguire, though he’s also more agile and quicker than the Englishman.

The number of interceptions he makes is indicative of good anticipation and willingness to step out from the back line, as shown in the graphic. At 6ft 2 he may not quite be the aerial presence the 6ft 4 Maguire is, but he still holds his own in this department.

A fee of less than £20million can be seen as a bargain in today’s market, and if the Foxes can get more than £50million for Maguire then this will more than cover their outlays for Evans and Söyüncü, which would come to around £23million.

Clever business such as this can mean clubs such as Leicester can continue to challenge the richer Premier League teams, just as they did in 2016 when they pulled off their unbelievable title win.