Our first prediction for the Burton vs Swindon match is that both teams will find the net. Burton drew a blank on Good Friday in their 0-0 draw at Accrington but they had scored in their prior nine games. Swindon meanwhile have scored in eight of their last 10 matches although they too failed to notch on Friday. Given Burton have just recorded a clean sheet, it's hard to imagine them keeping two on the spin having conceded 61 goals this season. Swindon are even worse on that front; they've shipped 67. It's a game for the attacking players alright.

The first of our three tips has touched on the defensive frailties both sides possess; the 128 goals they've conceded between them means they have two of the worst defences in then league. Their game averages in respect of goals per game are equal at 2.9 across the season whilst home form alone sees Burton's rise to 3.3. Swindon's away form sees their average increase as well with 3.2 the important number. Everything points to a match the neutral might find intriguing.

This tip goes against the form book slightly given Swindon have won their last two away games but it wasn't too long ago that Burton strung together a run of six wins on the spin. Their draw on Friday stopped the rot of two defeats and the combination of having the less pressure of the two sides and the fact they've won their last two home matches against Swindon swings things in their favour – albeit narrowly.

All the stats and odds for Burton vs Swindon

Burton on the brink of safety

There are only two places that separate these teams in the league table but it's the away side who need the points more. Much more. Burton sit six points above the drop zone whilst Swindon have just the one point advantage over Wimbledon. If Burton can put eight points between themselves and Swindon at this stage of the season it would be a huge victory; whether they can do the business or not remains to be seen.

FAQ about Burton vs Swindon 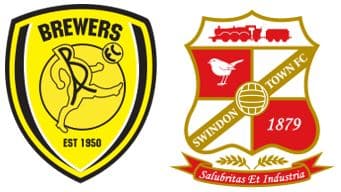