Norwich are the only team left in the Premier League after six games without a single point to their name. Burnley provide the opposition at Turf Moor this weekend and while both teams are yet to secure their first win of the new season, the hosts are the bookmaker's favourites to extend the Canaris long losing streak.

Here are our predictions for Burnley vs Norwich

Burnley might not be fairing much better than Norwich in the early stages of the new season but we're backing the hosts to claim all 3pts on Saturday. Burnley have won three of their last five encounters with Norwich, two of which arrived at Turk Moor. Burnley have played well at times this season, particularly against Leeds, Arsenal and Leicester in recent weeks, and we expect the home side to take the game to their guests this weekend.

We're not expecting this game to produce a lot of goals as both clubs won't want to give anything away cheaply and understand how important securing their first win of the season could be. Under 2.5 goals have been scored in two of the pair's last three encounters, both of which were won by Burnley. Under 2.5 goals were also produced in three of Burnley's last six outings, while both of Norwich's last two away trips have also witnessed fewer than three goals scored.

In terms of a final scoreline, 1-0 appears to be the most likely end result on Saturday. Burnley have the home advantage and are the favourites to win but there is added pressure on the home side and we have to remember that they are yet to win a game themselves this season. Burnley have the added soring power in their side and have only failed to score in two of their last six outings in all competitions, while Norwich have failed to score in three of their last four fixtures.

All you need to know ahead of Burnley vs Norwich

Will one of these two teams claim their first win of the season this weekend?

Burnley twice took the lead away at Leicester but we're held to a draw by their hosts. An own goal from Vardy put Burnley into an early lead but the very same player equalised in the 37th-minute. Burnley were back in front before the break though thanks to Cornet's first goal for the club. However, despite getting to the last 5-minutes without conceding another goal, Burnley couldn't hold out for the 3pts as Vardy netted his second goal for the Foxes to make it 2-2.

Norwich looked fairly toothless during their 2-0 defeat at Goodison Park. Everton took the lead from the penalty spot thanks to a VAR review and the home side wrapped up the points in the second forty-five through a nicely worked Doucoure effort. The Canaries can have no issues with that defeat, though, manager Daniel Farke seemed to think his team were hard done by, and even at this early stage in the season, Norwich look destined to return to the Championship.

Burnley: Roberts, Stephens, Cornet, Vydra, Rodriguez and Long are all injury concerns for the hosts heading into this weekend's clash with the Canaries.

Norwich: the visitors could be without the services of Placheta, Zimmermann, Cantwell. Normann and Byram for the trip to the northwest. 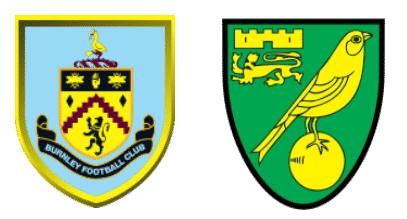