This Sunday, Chelsea travel to Burnley in a bid to maintain or extend their nine-point lead at the top of the Premier League table.

Antonio Conte’s side have been outstanding for much of this season and, with Arsenal, Liverpool and Manchester City falling away, are on course for the title. Furthermore, with their nearest challengers Tottenham facing a tricky test at Anfield, there is a real possibility that Chelsea could all but seal the championship with victory this weekend.

However, Sean Dyche’s Burnley are no pushovers. With 29 points already in the bag they are well on track to stay up and, given they have nothing to lose up against the Premier League leaders, can approach this Sunday’s match without fear. 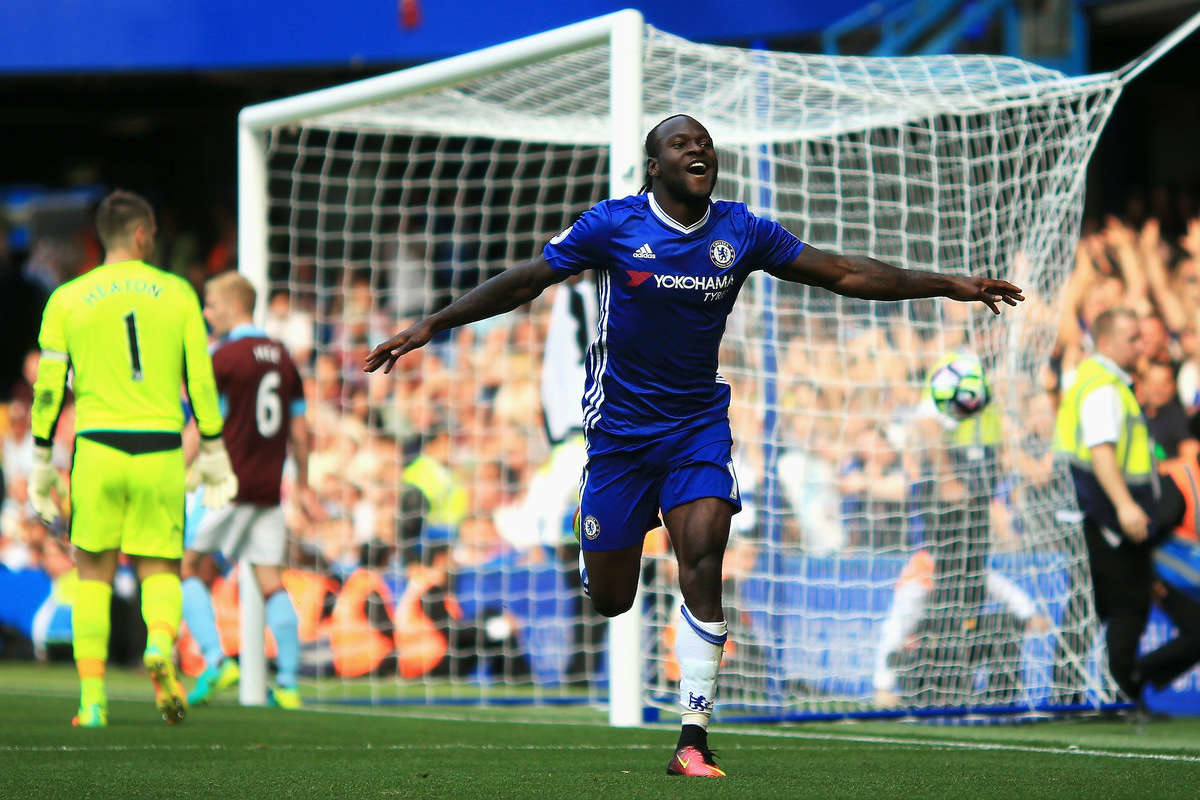 The two teams last met at Stamford Bridge on 27 August 2016. Chelsea ran out 3-0 winners on the day as they maintained their winning start to the season.

Eden Hazard opened the scoring after just nine minutes, curling home from outside the penalty area after a swift and efficient Chelsea counter-attack. On 41 minutes the score was doubled, with Willian creating space for himself to drive a low, hard strike into the far left corner of Tom Heaton’s net.

Burnley tightened things up in the second half, but couldn’t prevent a third goal from going in. On 89 minutes, yet more precise, forward-thinking football saw Chelsea open up space for Pedro to fire in a tantalising cross from the left-hand side. Victor Moses was on hand to finish.

Both Burnley and Chelsea have clear systems in place and those are unlikely to change for this weekend’s game. Dyche has utilised a rough 4-4-2 shape all season and will continue using it against Chelsea, who will continue in the 3-4-2-1 that has brought them such positive results since adopting the system last October.

However, Burnley will be without three important central midfielders. Dean Marney will be out for the long term with a serious knee injury, while Steven Defour is also set to spend time on the treatment table having picked up a hamstring injury. In addition, Jeff Hendrick will miss this weekend’s match due to suspension. Consequently, January signing Ashley Westwood could start in the middle with Joey Barton, who recently re-joined Burnley after a short spell in Scotland with Rangers.

Elsewhere, Dyche’s lineup is likely to remain unchanged—Heaton will start with a back four of Matthew Lowton, Michael Keane, Ben Mee and Stephen Ward in front of him, while George Boyd will play on the right of midfield with Andre Gray operating just off of Ashley Barnes up front. On the left wing, Robbie Brady may make his full Burnley debut.

Chelsea’s lineup will have a familiar feel to it, with no changes necessary unless Conte wishes to rotate personnel. Hazard is a slight doubt having picked up a knock in the 3-1 win over Arsenal, but should still start alongside Pedro and Diego Costa in the front three.

Behind them, the midfield four will be populated by Moses, N’Golo Kante, Nemanja Matic and Marcos Alonso, while the centre of defence will be made up of Cesar Azpilicuata, David Luiz and Gary Cahill. As ever, Thibaut Courtois will be Chelsea’s last line of defence.

13 – The number of points Conte’s Chelsea have dropped in the Premier League this season, out of a possible 72. They have been simply imperious, meaning anything other than defeat for Burnley should be seen as a huge positive.

1 – The number of points Burnley have taken from Chelsea over five Premier League encounters stretching back to 2009. Fortunately, Dyche’s side are a much improved force now.

4.4 – The average number of dribbles completed per game by Eden Hazard in the Premier League this season, a figure beaten only by Middlesbrough’s Adama Traore, who has played far less. Burnley will need to keep an eye on the Belgian if they are to keep a clean sheet.

7 – The number of consecutive home games won by Burnley in a run that began in December. Turf Moor has become their fortress, but Chelsea represent their toughest home test since their defeat to Manchester City last November.

Burnley may not be one of the most aesthetically pleasing teams to watch in the Premier League but, as results have proven, they are effective. Their primary aim is to restrict space between the lines for technically superior opposition through a compact defensive shape; they aren’t worried about not having the ball, as is proven by the fact that only West Brom have averaged less possession than their 42.2 per cent this term.

In attack, Dyche’s side are set up for direct play, with a target man — either Barnes or Sam Vokes — supported by a second striker in Gray. Burnley eschew building moves from the back or concerted spells of possession, instead knocking long balls for their target man to win, flick on or hold-up. Indeed, no team hits more long balls per game than their 84.

Like Burnley, Chelsea’s game is built upon solid defensive foundations. Conte’s system morphs into a 5-4-1 without the ball, with the inside forwards — Hazard and Pedro — dropping back into the midfield line while the wing-backs — Alonso and Moses — drop back to form a five-man defence.

However, while difficult to penetrate, Chelsea are also exhilarating to watch in an attacking sense. Their game is based on high tempo passing, quick exchanges and fast attacking transitions that make it difficult for opponents to settle back into an established shape upon losing the ball. 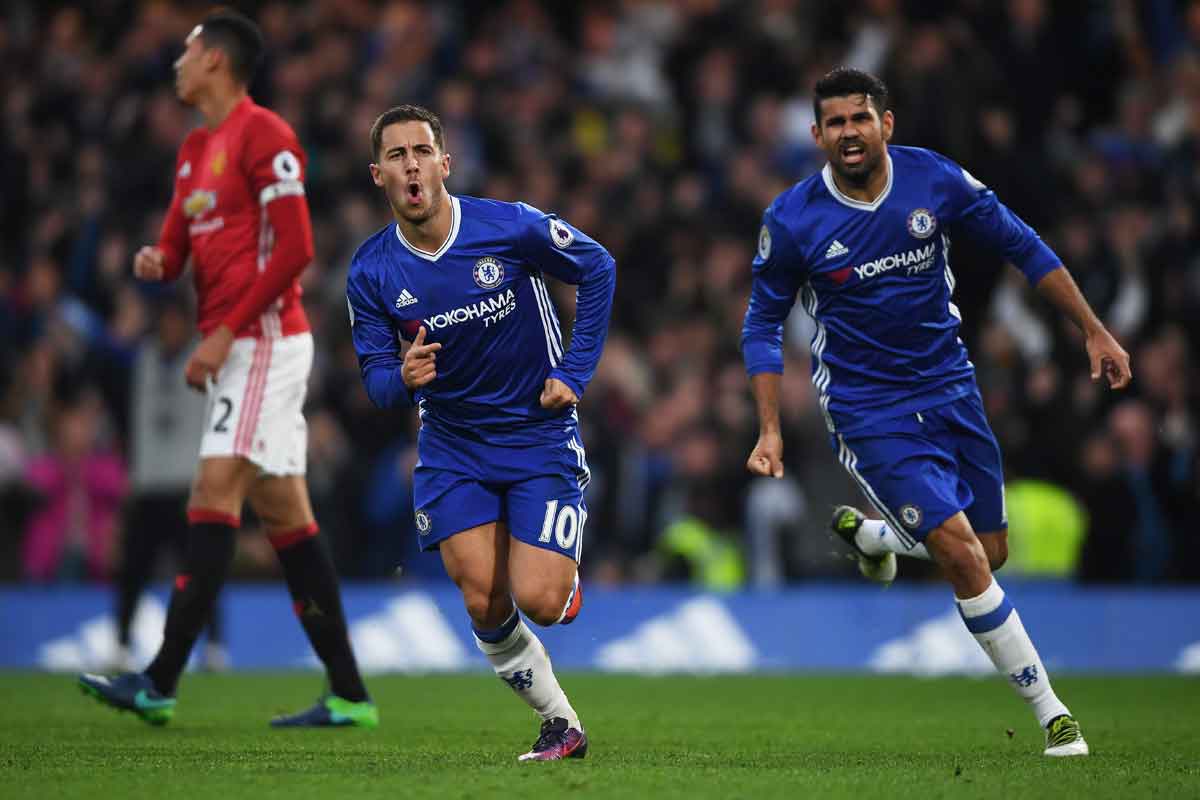 Chelsea’s use of inside forwards present their opposition with a problem. If Burnley choose to man-mark Pedro and Hazard this will only free up space behind for Costa to exploit. However, if they choose to sit off, they will allow Pedro and Hazard space and time to run at the back line.

It’s an acute problem, particularly where the devilish movement of Hazard is concerned, and Lowton will have to be organised and in constant communication with his central defensive partners to prevent the lithe Belgian attacker from finding dangerous pockets of space in and around the final third.