Having lost Michael Keane to Everton and Andre Gray to Watford in the transfer window, the shoulder injury suffered by Burnley keeper Tom Heaton was confirmation for most neutrals that the Clarets were doomed for the Championship.

In reality, Sean Dyche has done a stellar job, worthy of being in the running for the LMA Manager of the Year gong, by keeping his unfancied side in the top half of the Premier League table all season.

What makes that achievement even more remarkable is that the former centre-half has done so while remaining well within his budget. Banking a combined £43.5million from the sales of Keane and Gray might have been cause to loosen the pursestrings a little. But the £11million addition of Chris Wood from Leeds United was the only major arrival at Turf Moor last summer.

Not that Dyche had a choice when it came to Heaton, his captain. His season was only four games old when he came crashing down to earth against Crystal Palace on September 10, little more than a week after the transfer window closed.

For Dyche, that meant placing all his trust in the untried Nick Pope. The 25-year-old signed from Charlton Athletic the previous summer but had been restricted to just five cup run-outs as a Claret before being thrust into action for his Premier League debut.

He did not flinch. In fact, he did much better than that and Heaton has scarcely been missed at Turf Moor. However, the three-cap England international is finally back and approaching full fitness. He made his comeback in a training ground friendly against Blackpool on Tuesday.

Heaton conceded a penalty inside a minute – which Jay Spearing converted – but he will soon be back in contention. Which leaves Dyche with a tough decision to make. The former Watford boss has a small squad with his first XI all but set in stone. Choosing between Heaton and Pope would not have been a situation he envisaged at the start of the season.

However, with Heaton in contention for a place in Gareth Southgate's World Cup squad and Pope surely not far off, especially if Joe Hart continues to sit on West Ham United‘s bench, the implications are far reaching.

Pope has done little, if anything, to warrant being dropped now Heaton is back. But the former Manchester United trainee had been in exemplary form before his injury.

So with a chance of representing the Three Lions on the line, we took it to the numbers to see who was more deserving of a place between the sticks in the next 11 games. As Heaton has only made a handful of appearances this season, we've used data from last season. Pope's statistics are from the current campaign. 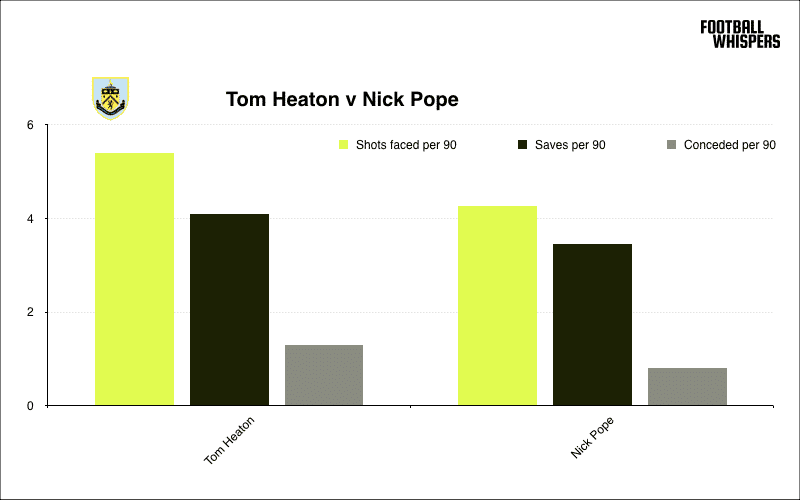 What is immediately noticeable is Heaton, facing 5.39 shots per 90, was worked harder last season than Pope (4.26 per 90) has been this. However, as a percentage, Pope has actually saved more of the shots he's faced – 81.2 per cent versus 75.8 per cent.

Could that be explained by where the shots are coming from? Burnley have, rightly, been lauded for the way they set up, forcing teams to shoot from distance. This season they are second only to Brighton & Hove Albion (46 per cent) for the proportion of the shots they've faced from outside the box (45 per cent).

But it was the same last season and, in fact, the areas from which they are conceding chances have remained very consistent in the last two seasons.

Their xGA (expected goals against) so far this season is 38.4. They have only been breached 24 times, however, which means they are over-performing to the tune of 14.4 goals. That is a reflection of just how good Pope has been between the sticks. All the more impressive when you're facing 16 shots per game – the most of any Premier League team.

Last season Burnley's xGA was 55.27 for the entire campaign. At the end of the season they had conceded 55, a barely noticeable difference.

If they continue to concede at the rate they are now (0.8 per 90) they will finish the season having shipped 30.4. Their xGA90 is 1.4 which, extrapolated over 38 games, means they are predicted to concede 53.2. After 27 games they're on-course to concede 23.2 goals fewer than their xGA suggests.

If they get anywhere near that total it will be a remarkable return and Pope will more than have earned an extended run as Burnley's No.1. The white smoke is emerging from Turf Moor.