Luka Jović's latest goal was spectacular. It came in Eintracht Frankfurt's 1-0 DFB Pokal semi-final win over Schalke. The Serbian, reacting quickest to Jonathan de Guzmán's corner, dashed to the near post and flicked the ball home with his heel.

That audacious finish, which set up a date in the showpiece against Bayern Munich, was enough of a marker of Jović's confidence.

Then came the celebration.

Watching the ball fly beyond Ralf Fährmann and into the corner, the young Serbian set off towards the visiting Frankfurt fans in the corner. First, he removed his shirt. Then he did the customary knee slide. Puffing his chest out, Jović soaked up the acclaim.

Mimicking Lionel Messi, he hoisted his jersey aloft, the name and number facing the crowd as if to say “get used to seeing this name.” Frankfurt fans certainly hope so: Jović is on loan from Benfica and in increasingly high-demand.

Naturally, he received a yellow card but was amusingly insouciant towards it, strutting past the referee as he pulled his shirt back on.

If there was ever a perfect measure of a young footballer's burgeoning confidence, this was it.

Jović's self-confidence is not misplaced. With nine goals in 26 appearances for Frankfurt this season, the 20-year-old striker has emerged as one of the hottest young properties in European football.

On loan from Benfica, Jović has routinely catapulted himself into the reckoning for Serbia at the World Cup, despite never having represented his country at senior level.

That doesn't matter to Serbia's fans, though. After seeing Jović light up Frankfurt's attack, they're demanding Mladen Krstajić call him up for the tournament in Russia. Whether that happens remains to be seen, but the forward has certainly done enough to turn more than a few heads at club level.

It will be an exciting summer for the youngster, World Cup or not.

Only 20, Jović's experience at a high-level belies his tender years. Born in Bosnia, he was scouted by Red Star Belgrade while still just a prodigious child, the club agreeing to pay his travel costs across the border every week.

On his senior debut, he became the club's youngest-ever scorer when he found the net aged 16, five months and five days.

Being gradually integrated into Red Star's first-team, Jović missed out on being involved in Serbia's triumphant under-20 World Cup campaign in 2015 because of a knee injury.

Jović had been prolific through the various underage set-ups for his country, scoring five in eight and nine in 13 for the U17s and U19s respectively. This season, he has shone for the U21s with six goals during their 2019 European Championship qualifying campaign.

Throughout his breakout 2014/15 season, Jović attracted comparisons to some of the game's deadliest forwards. Red Star director, Zvezdan Terzić, rather grandiosely likened the starlet to Radamel Falcao, even with just a handful of senior games under his belt.

Excitable Red Star fans believed he was Darko Pančev reincarnate. Considering Pančev was the European Golden Boot winner when Red Star clinched the European Cup in 1991, it was quite a lot of pressure to pile on a 17-year-old's shoulders.

Fortunately, Jović's self-belief is unwavering. What he lacked in prolificity he made up for in link-up play around the penalty area. Too technically proficient to become merely a poacher, Jović began blossoming into more of a rounded centre-forward. His rise was so meteoric that, by the summer of 2015, he was attracting interest from Arsenal, Juventus and Atlético Madrid.

Red Star, determined to keep their prized asset, rejected all advances but Jović struggled in the 2015/16 campaign thanks to the remarkable form of Hugo Vieira. In February 2016, Benfica snapped Jović up but, despite scoring regularly for the Portuguese club's reserves, the striker failed to fully break into Rui Vitória's first-team.

Last summer, with the World Cup 12 months away, Jović secured a two-year loan deal with Eintracht. In the Bundesliga, he has flourished, and his stats paint a striking picture of his upward trajectory this season.

Jović currently tops the Bundesliga's xG rankings for forwards under the age of 22. His tally of 0.83 xG90 leaves his fellow prospects trailing in his wake, including RB Leipzig's much-hyped pair of Liverpool transfer target Timo Werner and Jean-Kévin Augustin.

Jović's averages 0.79 goals per 90, placing him third behind Bayern Munich's Robert Lewandowski (1.25) and Pierre-Emerick Aubameyang, who managed 0.82 in the first half of the season for Borussia Dortmund before joining Arsenal. 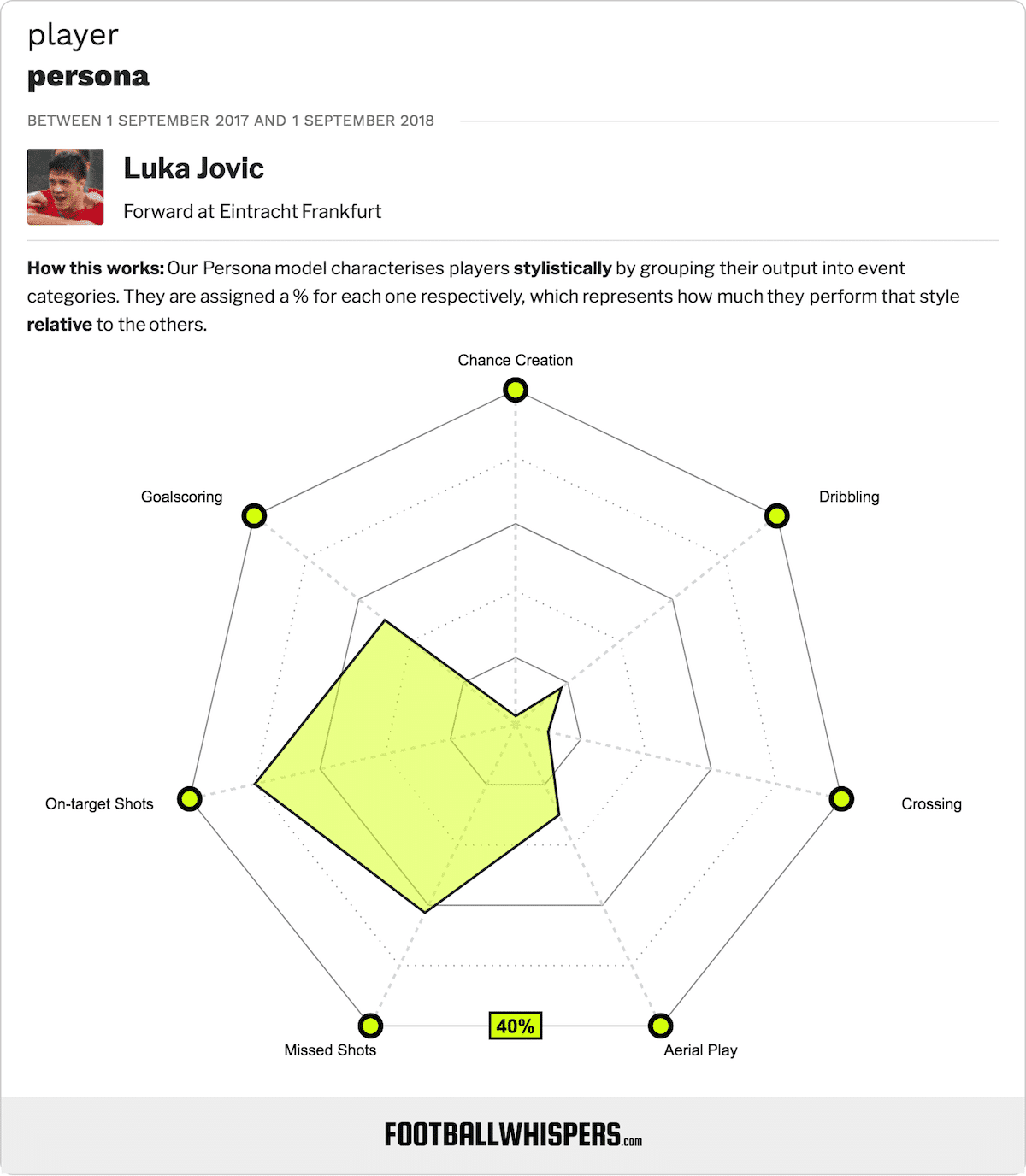 Jović may have rounded his skill-set during those early days at Red Star but, make no mistake, the penalty area is his wheelhouse. All nine of his goals for Eintracht have come from 18 yards or closer, with a solitary strike longer than 12 yards out.

Four of those goals have been scored from inside the six-yard box, suggesting that Jović is razor-sharp when it comes to anticipating where a cross will go.

With such an appetite to unnerve defenders, not including him in the Serbia team for the World Cup would seem like a misstep.

Although Jović is still young and developing physically, he has benefitted massively from the intensity of the training in Frankfurt. When he broke onto the scene in Belgrade as a precocious 16-year-old, Jović was slight of build with a flailing mop of hair.

Now, he's clean-cut and broad-shouldered. He can ride challenges from defenders and he relishes the physical battle involved in jostling for position to get on the end of crosses, some of which have come from fellow Serbian prospect, Mijat Gaćinović.

Jović still has a great deal of work ahead of him if he is to become a full-fledged Bundesliga goal machine, but he has unquestionably made significant progress during his stint at Commerzbank-Arena.

One suspects we will be hearing more and more about Jović in the next couple of years.