Timo Werner was tipped for stardom at a very young age but few expected him to develop into one of the most clinical strikers in Europe.

Looking back to when he was a budding wide forward at hometown club VfB Stuttgart, his time was shared between a role on the wing and a more central position. But not many would have envisaged the now 22-year-old becoming prolific in front of goal.

His pace, close control and intelligent movement was there from the off, but his finishing was erratic, he returned four, three and six goals in his three seasons in Die Schwaben’s first team – considering he made at least 30 appearances in each campaign, his record was far from intimidating.

There was a feeling he would mature into a more reliable goalscorer but in the Marco Reus mould. A threat from wide but not consistent enough to lead the line.

However, his €10million move to RB Leipzig after Stuttgart's relegation at the end of the 2015/16 season was the catalyst for Werner getting his career back on track. There was a fear within German football that he'd fizzled out playing for an underperforming team.

The move to Germany's most hated club didn't go down well in his homeland. Despite the fact Ralf Rangnick was looking to piece together a young, exciting group of players in a way that would aid their development, there was a belief that Werner had sold out.

Fast forward almost two years and the perception has completely changed. Rangnick was right and the forward is now Germany's leading striker and a cert to be involved in Joachim Löw's World Cup squad.

His form at the Red Bull Arena has caught the eye of many of Europe's elite clubs. He was linked with Real Madrid back in October while Chelsea are reportedly interested in the Germany hit-man, who is also a Manchester United and Liverpool transfer target.

Werner has been unable to replicate the free-scoring form of last season, netting just ten goals in the Bundesliga so far this term, and questions are now being asked as to whether he's as good as made out.

With this in mind, we've taken a look at Werner's stats over the past three seasons.

Does Werner justify the hype? 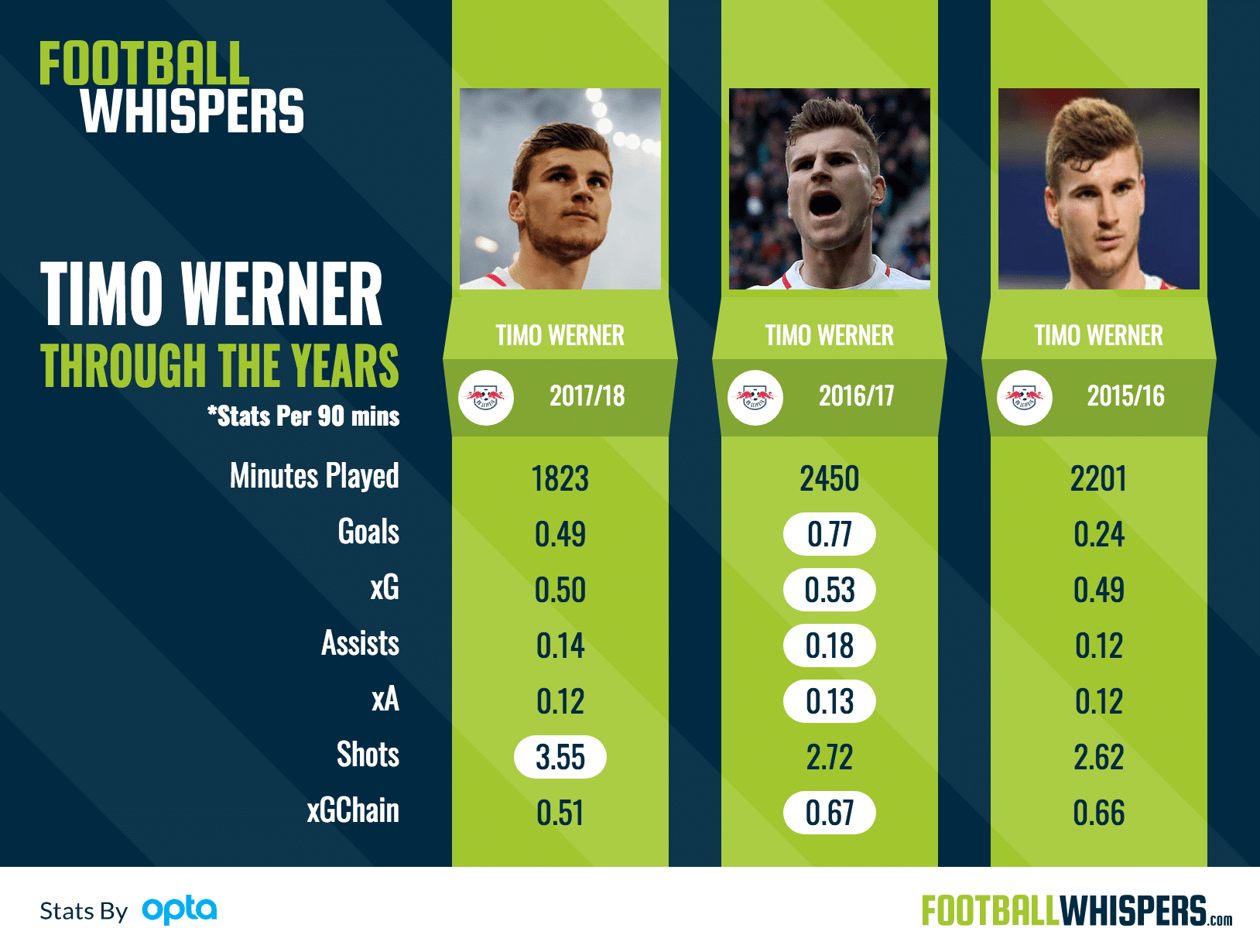 A striker is expected to score goals, to get into high quality goal scoring positions and to create chances for team-mates. The stats in the graphic showcase those attributes best.

The 2016/17 season was by far his best to date. He was involved in 0.95 goals per 90 and comfortably outperformed his expected goals number. For those unfamiliar with xGChain it's the xG of the possessions that a player is involved in throughout a match, by making a pass or having a shot.

While last season was his breakout campaign, his underlying numbers have been eerily consistent over the past three years. It's why he's so highly rated.

His average xG+xA90 (expected goals + expected goals assisted) over this period is 0.62, and this includes when he was playing in a wide area for Stuttgart. It shows that no matter where he starts on the pitch Werner has a knack for getting into high quality scoring positions on a regular basis.

He underperformed his xG during the 2015/16 season and over-performed last year. During this campaign, however, he's been par. He's averaging a goal every other game and this is in a team appearing in Europe for the first time and coming to terms with the increase in matches being played.

He's scored 39 per cent of his team's Bundesliga goals last season and has 34 per cent of them this time around. He's still prolific. He's still a key part of the RB Leipzig attack. And he's still one of the best forwards in Europe on current form. 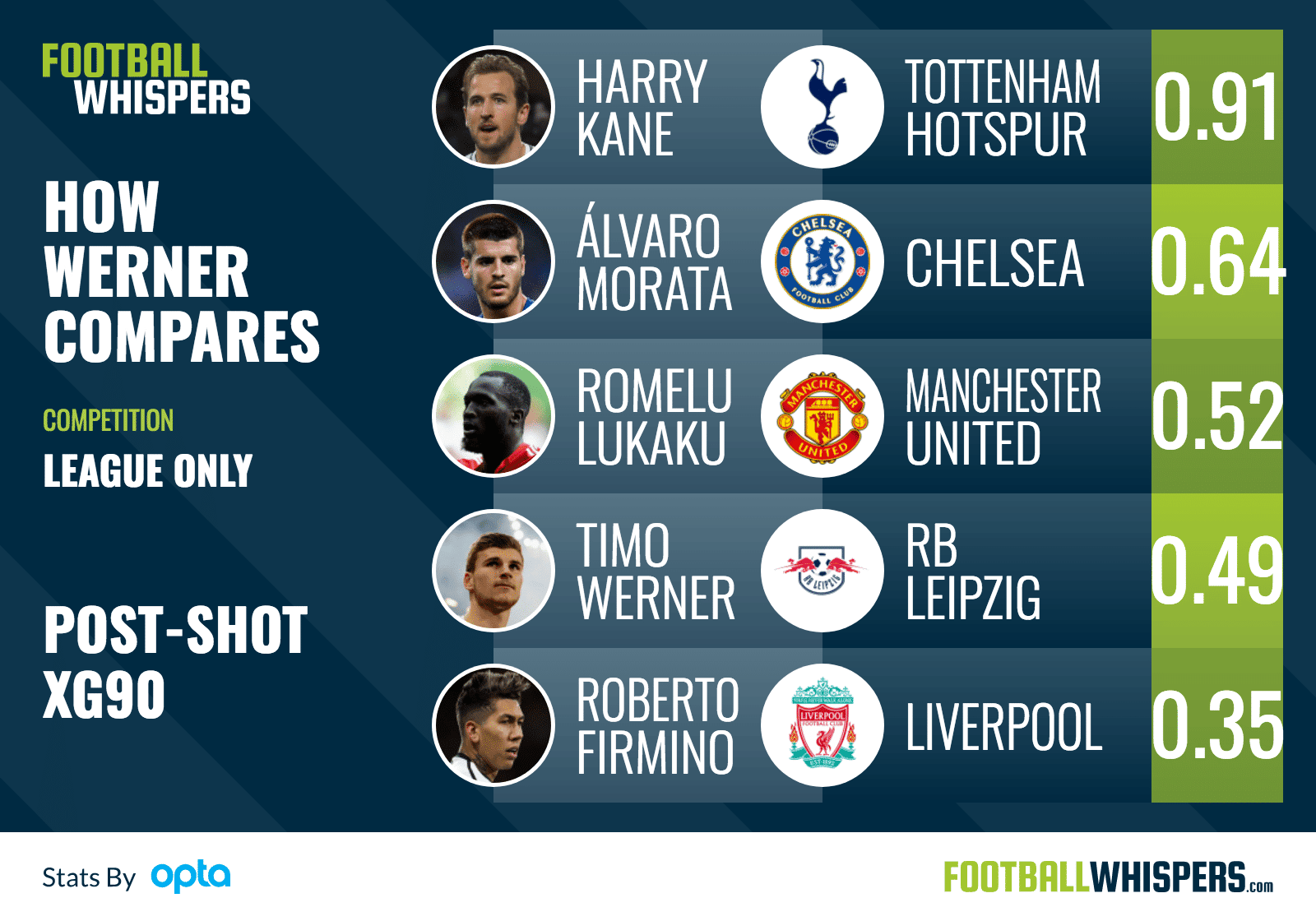 Players who have better shot quality will outperform their xG and Harry Kane, Àlvaro Morata and Roberto Firmino do just that.

is par for the season, just like Werner is now and was during his last campaign.

However, when comparing him to these Premier League forwards you have to consider the fact the Germany international is the youngest of the five players.

Werner is holding his ground with some of the best the English top flight has to offer and the best thing for potential buyers is that he's only going to improve.

With experience, his choice of shots will become more selective and he'll be even more composed. The solid foundations are there for the 22-year-old to really kick on.

There's a lot of responsibility on his shoulders for both club and country and he's not shrinking under the pressure. RB Leipzig are in with a chance of a Champions League finish in the Bundesliga and are into the quarter-finals of the Europa League. Werner has seven goals in ten appearances for Germany showing he's made the step up with relative ease and thrives alongside even better players.

The links to big-money moves aren't premature. They're justified. Whichever club manages to sign the RB Leipzig No.11 is getting a forward who can terrorise defenders for the next decade.