Premier League clubs like to raid the Bundesliga and that trend looks set to continue this summer.

After the success of Kevin De Bruyne, Roberto Firmino and Heung-min Son, clubs in the English top flight are always on the prowl in Germany hoping to find their next potential bargain.

However, with Bayern Munich looking to rebuild and seemingly allergic to shopping outside of Germany – Lucas Hernandez the exception – competition for signatures will be fierce.

With this in mind, we've taken a look at eight Bundesliga stars who could be of interest to Premier League clubs. 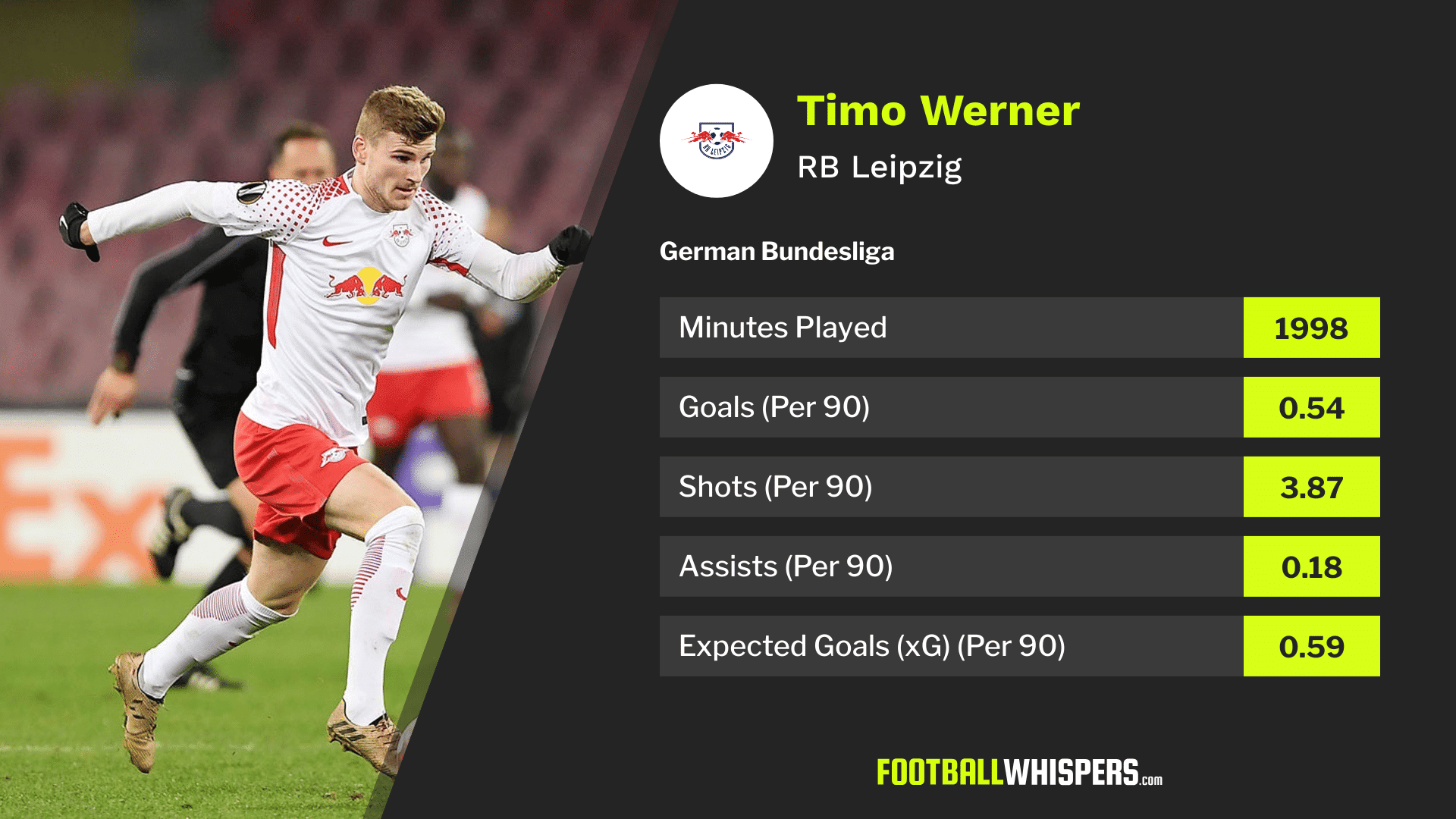 RB Leipzig have a big decision to make this summer. Do they cash in on their prized asset while they still can or do they keep him for a year and lose him on a free?

Bayern are believed to be interested in the versatile 23-year-old while Manchester United are reportedly eager to bring him to Old Trafford.

However, Liverpool are keen on the former Stuttgart wide forward and his profile is perfect for that of forward used by Jürgen Klopp.

He could well be the fourth musketeer the Reds have been missing since the departure of Philippe Coutinho.

Arguably the most sought after striker in world football right now. The Serbian hitman has been linked with moves to Chelsea, Manchester City, Liverpool, Barcelona, Real Madrid and Bayern.

Going off his performances for Eintracht Frankfurt, it's easy to see why. He's clinical in the penalty area, scores a variety of goals and comfortably outperforms his xG as all elite forwards do.

There are shades of Luis Suárez and Sergio Agüero to his play. He's brutish and relentless. The perfect modern-day No.9.

But he isn't the only Eintracht Frankfurt forward who could be on the move when the transfer window opens. 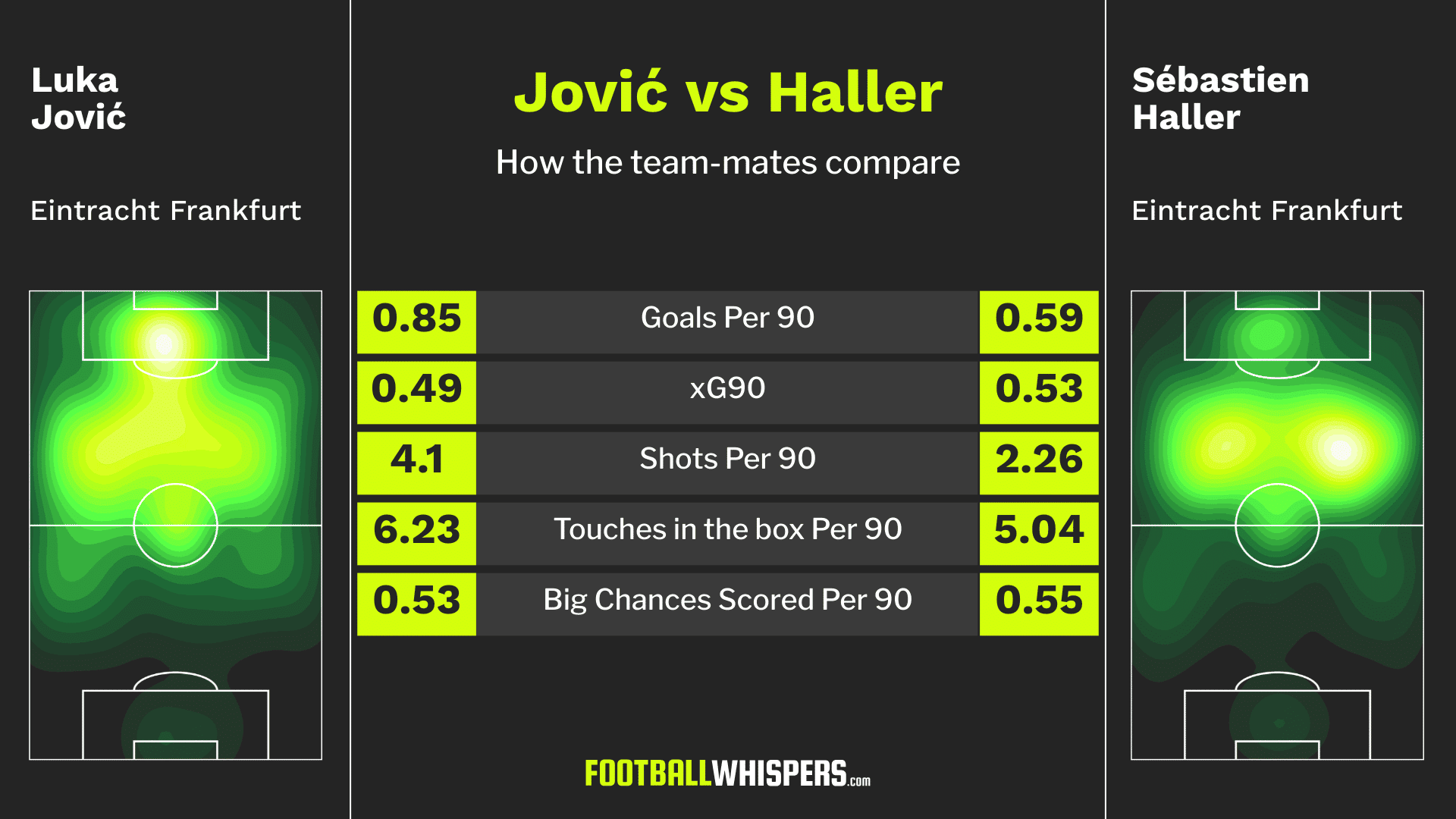 The 24-year-old is having his coming-of-age season. He's involved himself in 23 Bundesliga goals this term, a total only Robert Lewandowski can better.

While he's not been getting as much fanfare as team-mate Jović, Haller is perhaps even more important to the German side than the hotshot Serb. Remarkably, he's scoring 0.55 big chances on a per 90 minute basis.

He's excellent in the air – he's winning 8.28 aerial duels on average – yet only two of his 14 goals have been headers. It shows he's much more than just a big man. 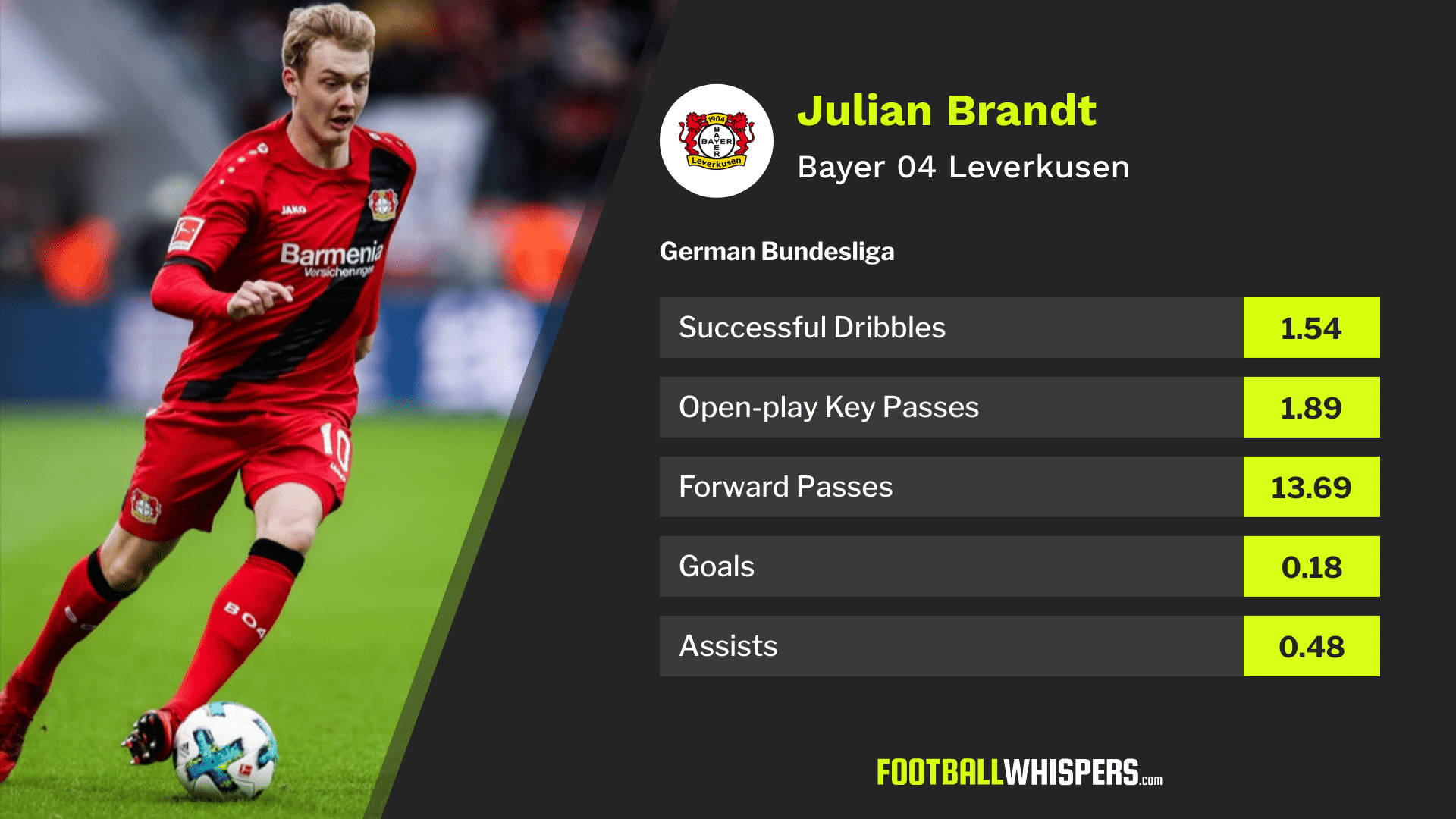 If the rumoured €25million release clause is true, clubs will be queuing up to sign the midfield maestro.

Tipped to be a Liverpool transfer target, Brandt offers something different since the switch to centre midfield under Peter Bosz.

Though he burst onto the scene as a wide player, he looks right at home in the centre of the park. Orchestrating the Bayer Leverkusen attack similar to the way in which De Bruyne dictated proceedings for Manchester City last season.

Brandt has the perfect profile to play as a No.8 for any of the top six clubs in the Premier League. The skeleton key capable of unlocking even the sternest of defensive units.

Embolo has had a lot of bad luck since his €20million move to Schalke in the summer of 2016. Tipped to be a star when he burst onto the scene as a teenager for Basel, injuries have deprived the world of a potential star.

A broken leg derailed his 2016/17 campaign while he's missed a large chunk of the current season with a broken foot. A change of scenery may be all that is needed to get him back on track.

A versatile forward capable of playing wide, during his days with Basel he scored 31 and assisted 22 goals in 90 appearances. At 22, he's still young enough to be shaped into whatever a potential new club wants him to be.

The Hoffenheim playmaker has been linked to Premier League clubs in the past.

According to reports, Tottenham Hotspur wanted to make him their long-term successor to Mousa Dembélé while Liverpool, due to their links with his agency Arena11, were said to be interested in adding the midfielder to their ranks. 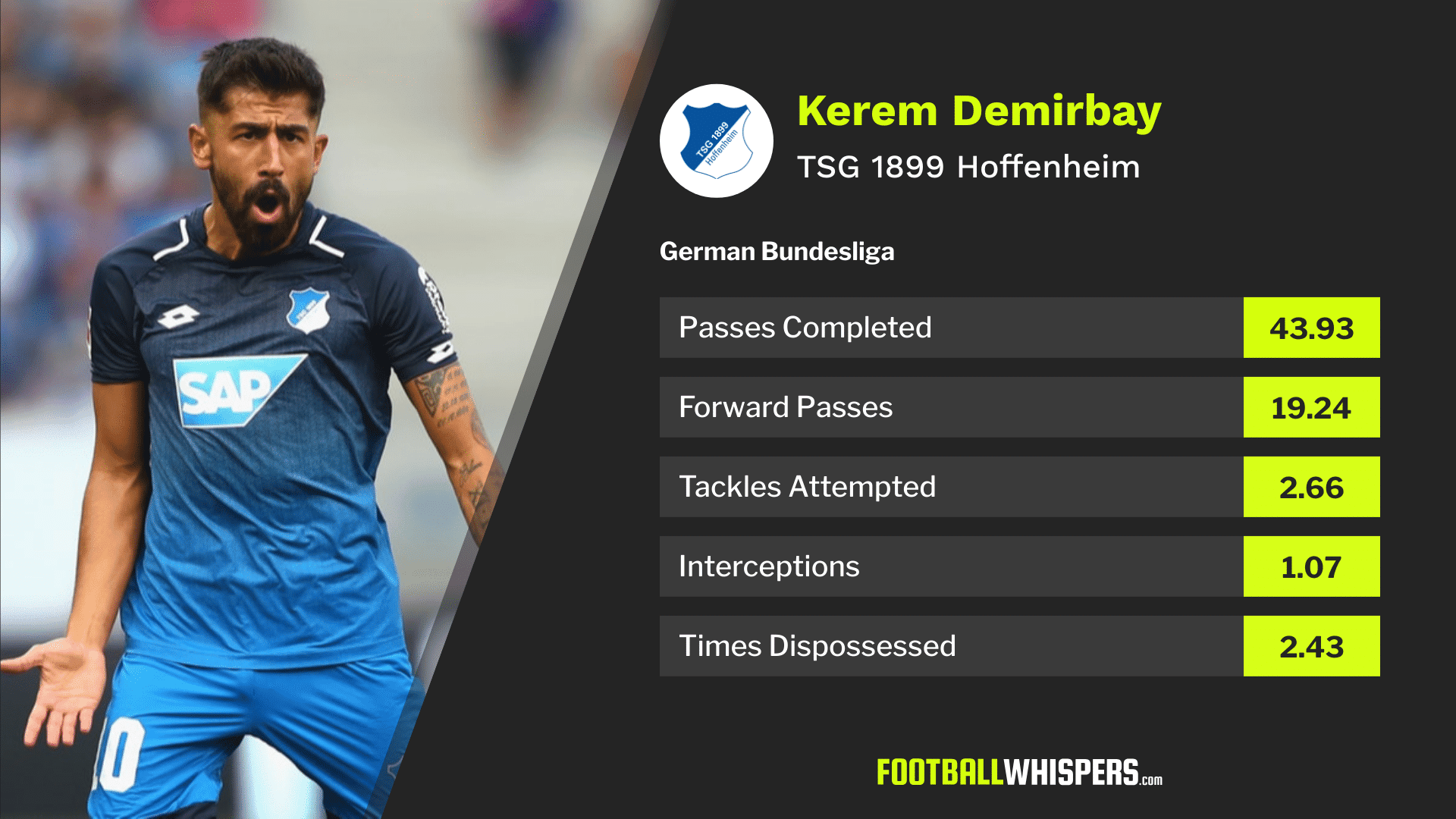 A rarity in the modern game, Demirby is an all-rounder in the sense he can dictate the tempo as well as acting as a destroyer in the middle third, something noticeable when looking at his stats.

Hoffenheim will be going through a transitional period this summer with Julian Nagelsmann leaving the club meaning it might be an ideal time to make a move for the 25-year-old.

Both Bebou and Hannover have had seasons they will want to forget. Injuries have stalled the winger's campaign and the team have suffered without him, currently languishing bottom of the Bundesliga.

Despite making just ten appearances in the German top flight this season, the 24-year-old has been involved in six goals. When fit an firing he's a direct attacker who regularly looks to beat his man.

During the 2017/18 campaign, he averaged 5.21 dribbles per 90 – the third highest number in the Bundesliga last term. His xG+xA per 90 average last season was 0.51 showing he is a threat in terms of goals and assists.

Another Arena11 client, if clubs are looking for a value for money winger then Bebou is a risk worth taking. 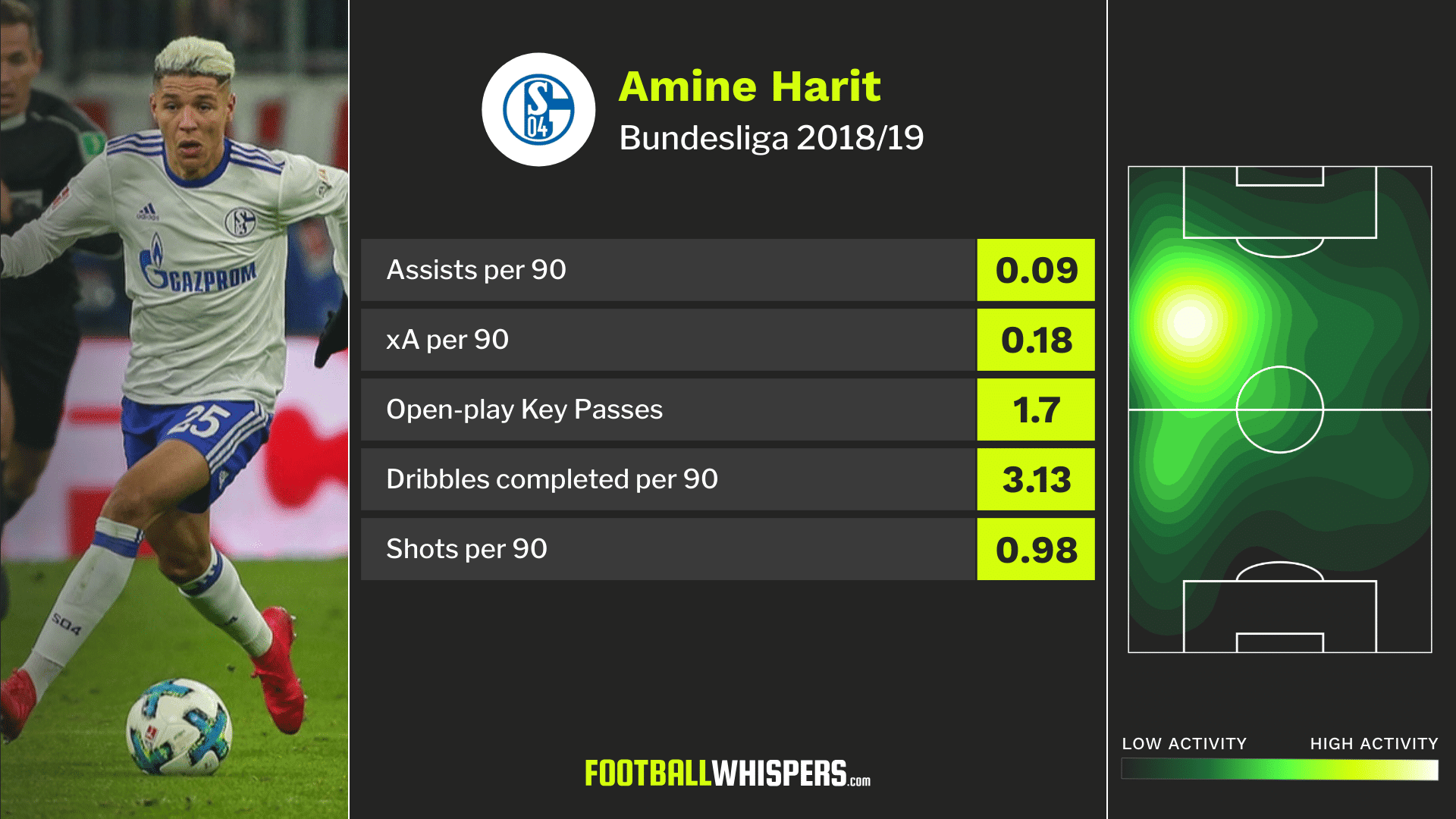 While it's true that Harit needs to work on his end product, with an xA average of 0.18 this season, what he brings to a team is the ability to break the lines and create space.

An adept dribbler in tight spaces, the 21-year-old has completed 3.13 dribbles on a per 90 basis this season as well as playing 1.7 open-play key passes.

And this while playing in an underperforming Schalke side. In a better team, coupled with more experience under his belt, Harit's numbers will only swell.

Similar in many ways to Embolo, a move away from the Bundesliga side may be necessary if he's to ever fulfil the abundance of potential that he has.