Not bad for someone who's been playing at full-back since the start of December.

There haven't been many bright spots this season for Arsenal but the form of Saka has been one of them. The 18-year-old, who hails from nearby Enfield, had been a revelation for the Gunners – either in his prefered position as a winger or at left-back.

Saka's displays for the North Londoners have not gone unnoticed. In true Arsenal fashion, he has already found himself at the centre of a contract wrangle. Liverpool and Manchester United are reportedly keen to take advantage of the fact his present deal expires next summer with talks progressing ‘slowly'.

And Sunday's showing in the 3-2 win over Everton will only have helped cement their interest in Saka. Benched in favour of the fit-again Sead Kolašinac, Mikel Arteta was forced to call upon on Saka when it became apparent the Bosnian could not continue after just 18 minutes.

Nine minutes after his entrance, Saka crossed from the left for fellow academy graduate Nketiah to steer beyond Toffees keeper Jordan Pickford. It was a ferocious, whipped, curled delivery right onto the toe of the Arsenal forward, making his job simple.

That was Saka's fourth assist in his last four outings for Arsenal and Gary Neville, on co-commentary duties for Sky Sports, was sufficiently impressed by the quality of the youngster's delivery.

“(Alex) Iwobi goes to sleep a little bit but he doesn't do too much wrong,” Neville said. “But that cross, wow. There is not a lot a defender can do about that and neither can the goalkeeper.

“The quality of the cross was absolutely outstanding. All you want is your striker in that position and he (Nketiah) is. He gets a good contact on it.”

This is nothing new, though. Saka has proven himself a dangerous and consistent provider down the left-hand side, regardless of where he starts on the field.

Saka is third among Premier League left-backs for Big Chances created (per 90) with 0.33. Only Aston Villa‘s Matt Targett (0.39) and Liverpool‘s Flying Scotsman Andrew Robertson (0.36) can top that figure. 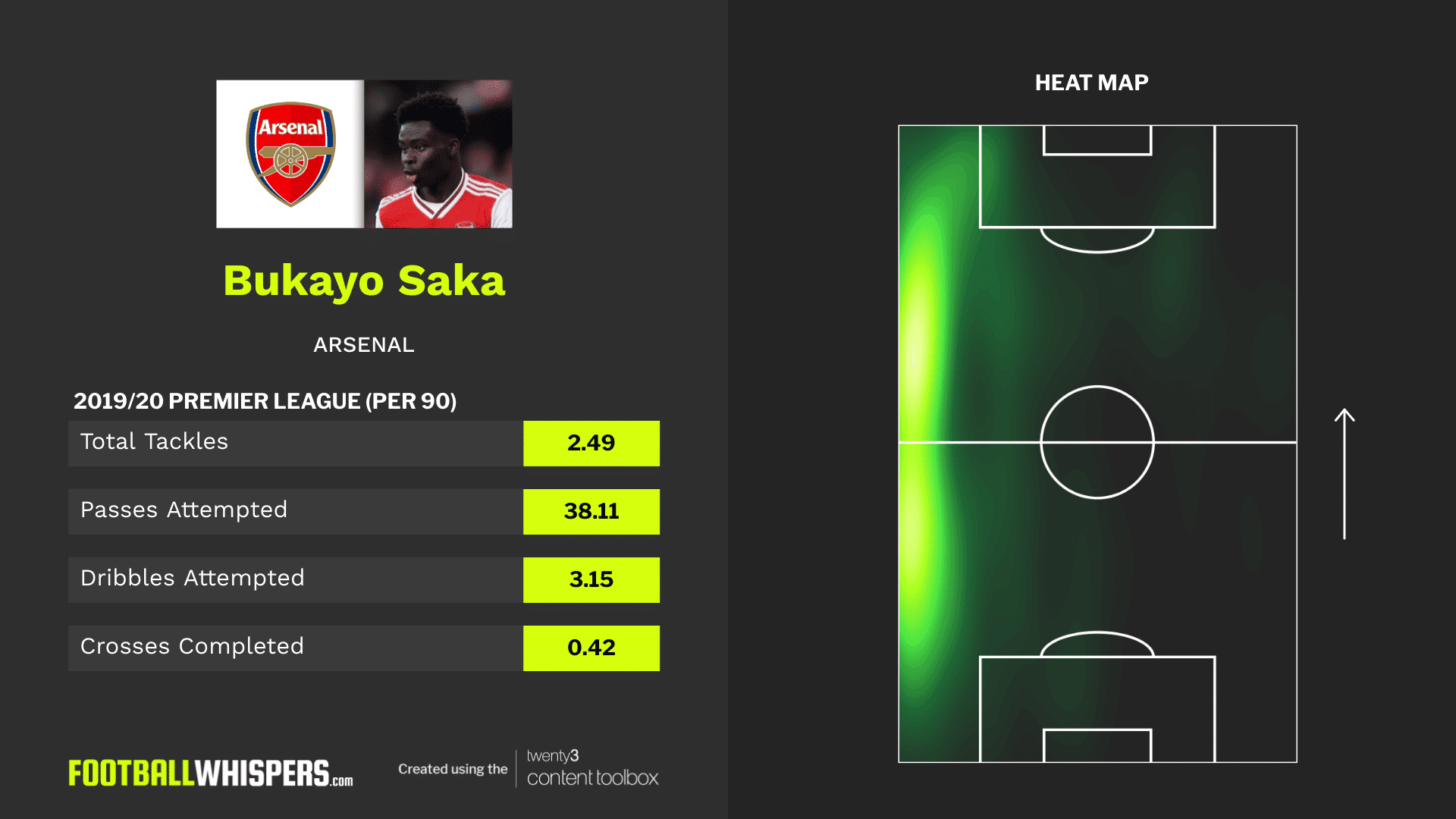 Unsurprisingly, given his natural position is further forward, no left-sided defender takes more touches in the opposition box (3.49 per 90) while Saka's 3.15 take-ons are bettered only by another winger-wing-back hybrid in Arthur Masuaku (4.05). The Arsenal man comes out second for completed dribbles (1.91) with Masuaku (2.37) again the only one of his contemporaries posting more.

At a time when the lines between wingers and wing-backs are becoming increasingly blurred, it's easy to overlook the primary function of a defender and a common criticism of modern full-backs or wing-backs is they too neglect the defensive side of their game. Not so Saka, who is sixth in the Premier League for tackles (2.49 per 90) and tackles won (1.49).

What makes that all the more impressive is Saka did not even move back to play in the No.3 role until December 5 and a 3-0 defeat by Manchester City. It wasn't by choice, either. With summer signing Kieran Tierney seeing his season ended prematurely by a dislocated shoulder and deputy Kolašinac also sidelined, it fell to Saka to fill in. But he has excelled and, since then, has played exclusively at full-back.

It was Saka who assisted Alexandre Lacazette‘s match-winning strike in Thursday's Europa League win over Olympiacos. While Gunners boss Arteta doesn't see the England Under-19 international as a full-back, he has been impressed with the way he has taken to the role.

“We try to put him in the position where we can surround him with the right players in the right areas,” Arteta said after victory in Greece.

“He's not a full-back. He has a lot of courage to make decisions in the final third… I'm very pleased with his performance.”

With so many attack-minded players to cram into his starting XI – finding a way to field Lacazatte, Pierre-Emerick Aubameyang, Mesut Özil, Gabriel Martinelli and, now, Nketiah is proving a challenge – Saka could find his calling is further back.

The inevitable question now looming over the 18-year-old is whether he will represent England or Nigeria at senior level. Though born in London, Saka is of Nigerian descent and there will surely be competition to cap the pacey left-sided player as soon as possible to secure his international future.

In the meantime, though, Arteta says his job is to keep Saka's feet on the ground after a stunning breakout season.

“Bukayo had some issues as well before the game but then he started to play after a few minutes,” the Spaniard said after Sunday's win.

“It was a great contribution offensively but as well there are other moments when he showed today that there is still a lot of margin for him for improvement, and he needs to keep his feet on the ground and we have to help him to do that.”

Even more pressing than that? Getting Saka to sign a new deal before he follows in Fàbregas' shoes by leaving in search of silverware.