Over the past decade or so, the English Premier League has descended into a glorified billionaires’ playground. The power of overseas investment can take a modest club like Chelsea or Manchester City and transform them into world powerhouses overnight. Generally speaking, those that spend succeed while those that don’t tend to fade away. Subsequently, the desperation to keep hold of those astronomical TV deals and international revenues has led to increased spending year on year; in fact, this season saw clubs spend a combined total of over £1bn over the course of two transfer windows.

From a financial perspective, the Premier League has become absolutely bonkers. Yet, amidst the glitz and glamour, Tottenham Hotspur have managed to claw their way into the elite pack to extend the big four to five. Astonishingly, they’ve managed to achieve the feat whilst turning a profit on the transfer market too.

At this moment, the football world is revelling in the success of Claudio Ranieri’s Leicester City as the plucky Foxes edge towards what would be the greatest fairytale of Premier League history. Nevertheless, that one season of heroics should not overshadow Tottenham’s rise to prominence over the past five or six years, particularly as they’ve done so with such unconventional methods on the transfer market.

Over the past half-decade, Tottenham’s cumulative sales have exceeded purchased by over £53m. Of course, that figure is inflated due to one world record transfer, but that money was reinvested; contrary to popular belief, the club’s ability to turn a profit has become a sustained model as is underlined by the fact their net spend has been a negative value in each of those five years. To put that stat into perspective, Swansea are the second most economic Premier League outfit in that period with a net spend of £9m.

In comparison to the other five clubs commonly vying for Champions League spaces, Tottenham’s approach is mind-blowing. Even Arsenal have a net spend in excess of £100m over the course of those 10 transfer windows, which makes Spurs’s consistent presence near the top all the more staggering. It is worth noting that the club did spend vast amounts of money to finally break the top four under Harry Redknapp, and they invested a further net spend of £17.5m during their one season of elite continental competition. Nevertheless, the fact they’ve managed to stay there without overspending on players is quite remarkable.

So how exactly have they done it? Naturally, many factors can be attributed to Tottenham’s recent success, but it all starts at the top with Daniel Levy. The Spurs chairman has been widely regarded as one of the finest since taking over from Sir Alan Sugar in 2001, and his business acumen is second to none. His relationship with the fans hasn’t always been perfect, but there is no question that he has the club’s best interests at heart; at a time where many owners are void of the emotional connection to their organisations, Levy’s genuine love of the position is vital.

That’s not to suggest that Levy hasn’t opened the chequebook when needed. No less than 10 players have arrived in eight-figure transfer fees since 2012/13; the key difference is that Tottenham have spent their money in a sustained manor. The emphasis on sustainability doesn’t end with the player recruitment process either.

After losing Harry Redknapp in bizarrely acrimonious circumstances, Spurs learnt from past mistakes and made a conscious decision to invest in young management. Andre Villas-Boas never worked out while Tim Sherwood was only ever going to be a temporary measure. However, Levy has found a gem in Mauricio Pochettino. The Argentinian’s work has unquestionably been the driving force behind the push from Champions League hopefuls to title contenders, as well as their ability to do it without overspending.

Pochettino’s eagerness to trust youth has proved to be a masterstroke. It’s no secret that the revelations of Harry Kane and Dele Alli have been the catalyst behind Tottenham’s on-field triumphs. Similarly, Eric Dier and Ryan Mason have impressed at White Hart Lane too; this core of young English talent might not quite match up to Manchester United’s Class of ‘92, but Pochettino’s Prodigies certainly have an air of the Fergie Fledglings about them. If you’re going to emulate any team in Premier League history, then the most dominant force of the past 25 years is a good place to start.

In fairness to Pochettino’s predecessors, that work was started prior to his arrival, with the most notable case being Gareth Bale. Redknapp’s patience with the upcoming Welsh wizard was arguably his greatest triumph at White Hart Lane. After a difficult start to life in the Premier League, the £5m teenage signing would eventually grow to become a two-time PFA Player of the Year before leaving for the bright lights of Real Madrid for a world record £91m. Theoretically, the system of championing youth until its ready to either thrive or be sold for big money should be commonplace; in reality, the urgency for immediate success has established an emphasis on short-termism. What should be the norm is now very much the aberrant. Tottenham and Pochettino should be applauded for the way they’ve handled Kane, Alli and co. 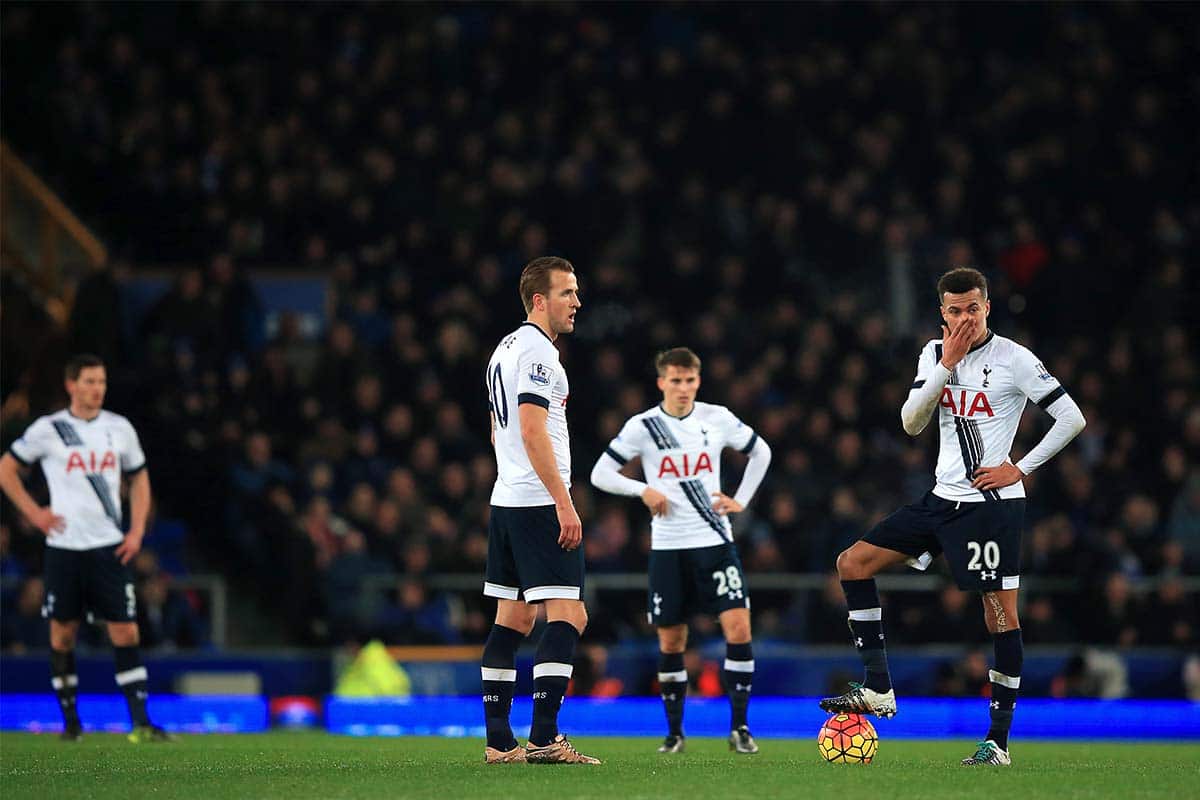 Patience has been key for Tottenham, not only with youth products. Villas Boas famously invested the bulk of the Bale income on new recruits. For one reason or another, Roberto Soldado didn’t work out whilst Paulinho’s promise was short lived too. However, in spite of a difficult start, Erik Lamela has now joined Christian Eriksen as a key member of the Spurs squad. The fact Pochettino has been able to squeeze more out of the players he inherited has certainly helped pave the way for relatively low spending since his arrival.

Even a manager as talented as the 44-year-old can’t get every transfer deal right. Where Pochettino is blessed, however, is his ability to decide the fate of players quite quickly. Additions whose faces didn’t quite fit have been quickly moved on whilst the successful signings have quickly cemented their places in the squad. Perhaps more crucially, Spurs have developed a real knack for unearthing gems in both the English lower leagues and on the continent.

While English stars Alli, Dier and Kieran Trippier have performed well, it’s hard to argue against the fact that Toby Alderweireld has been the club’s star signing since Pochettino arrived. The Belgian has formed a brick wall at the heart of the Premier League’s most economical defensive unit. His playing style may be different, but it could be argued that his presence has finally filled the void left by Ledley King; as a consistent performer free of injuries, you’d have to go way back to the days of Sol Campbell to find an equally commanding figure.

If Spurs can usurp Leicester to win their first title since 1961, the addition of Alderweireld will have played an integral role. This ability to merge youthful talent with fantastic finds on the continent is a skill that served arch rivals Arsenal particularly well in past years. While it would be wrong to suggest that Tottenham’s approach mimics the Arsene Wenger ethos, it’s those borrowed ideas that are currently on the verge of catapulting the White Hart Lane club ahead of their rivals for the first time since Wenger arrived on English shores.

In truth, Tottenham’s hand has somewhat been forced as backroom talk has been dominated by stadium talk over the past five or six years. Nevertheless, their quality recruitment should be commended as they look to finally seal their return to the Champions League. In order to make those signings a possibility, though, the club has had to sell well too. Quite frankly, this has been one of their biggest strengths.

The Gareth Bale was transfer was hardly an isolated incident for Spurs in the last decade. Only one year earlier, Luka Modric made the switch to Real Madrid for roughly double what Tottenham paid. Additionally, the likes of Dimitar Berbatov and Darren Bent were involved in big money transfers too. Perhaps the greatest saga, however, was the sale and buy back of Robbie Keane as Spurs gained £7m minus add-ons for what was essentially a six-month loan to Liverpool.

As far as their financial spending is concerned, though, it’s the fringe players that make the biggest impact. Unlike their rivals, Tottenham haven’t kept hold of dead wood or farmed out dozens of players until their market value erodes. Over the past five years especially, the White Hart Lane club have enjoyed the Midas touch when it comes to letting surplus talent leave. Peter Crouch, Wilson Palacios, Niko Kranjcar, Steven Caulker, Jake Livermore, Jamie O’Hara, Iago Falque and Paulinho have all been sold in recent years for a minimum of £5m each. Even January’s £12m sale of Andros Townsend to Newcastle underlines the club’s ability to shift unused players for significantly more money than recent performances suggest they are worth. In truth, that makes them a unique outfit in the Premier League.

When combined with the astute additions and continued ability to develop promising youngsters into genuine Premier League stars, it should come as no surprise that Tottenham are vying for the ultimate prize. At the very least, they will be expected to clinch their return to Champions League football.

The Spurs are certainly marching on as we head to the climax of a thrilling Premier League season. Given the sustainable of their financial dealings, they might just stay there for years to come.