It's been a busy few days for Manchester United. After agreeing terms with Swansea City for Daniel James, the club reportedly failed with a £40million bid for Crystal Palace right-back Aaron Wan-Bissaka.

Another interesting nugget to have come out of the United transfersphere is a report that Sporting CP midfielder Bruno Fernandes is close to joining the Red Devils.

The 24-year-old, who impressed as Portugal edged the Netherlands in Sunday night's Nations League final, has also been linked with Manchester City, Tottenham Hotspur and Liverpool in recent months after shooting to prominence with a sensationally prolific season for his club, scoring 32 goals and adding 18 assists as Sporting won the Taça de Portugal and Taça da Liga.

And although United's hopes of landing Ajax captain Matthijs de Ligt appear slim, it seems as though they have won the race for another highly rated club captain.

According to Italian journalist Pietro Balzano Prota, an agreement has been reached between United and Sporting.

Tweeting late on Sunday night to wash away the ‘Monday Fear' of thousands of hopeful United fans, Prota said: ‘An agreement with the club has been reached. They are supposedly working on the last details, one aspect being the commissions. Various clubs seem interested in the player, but for now ManUtd is very close to signing him.'

Now, before we progress, a little context to this rumour. Prota is renowned for being one of the most reliable AC Milan reporters out there. Yes, on the surface it seems a little strange that he would be covering Fernandes' potential move to United, but the player spent his formative years in Italy, first with Novara before moving onto Udinese and Sampdoria.

In addition, back in March, Rai Sport (via InsideFutbol) reported that Milan had expressed interest in Fernandes and were confident due to his father having worked for the Rossoneri as a scout in Portugal.

It's possible that in enquiring about Milan's supposed pursuit, Prota was informed that United are leading the chase. Of course, it's important to note that his tweet reiterates that ‘various clubs' are interested and, while United have reached an ‘agreement' with Sporting, they are yet to do so with the player.

However, should United land Fernandes, it would be an eye-catching piece of business. The 2017/18 Primeira Liga Player of the Year's efficiency in the final third has generated an enormous amount of interest, but is he the right fit for Solskjær's United rebuild?

Fernandes plays higher up the pitch, of course, most often in the No.8 role for Sporting behind the front three in a 4-3-3, the system Solskjær has predominantly used during his time at Old Trafford. It's worth noting, however, that he has operated in a deeper position alongside William Carvalho for Sporting during the 2017/18 campaign.

He is unlike any player United have had in recent times, combining tireless work rate with a voracious appetite for goals. Given Fernandes' price tag, it's difficult to see Solskjær adding another midfield this summer, so the plan would presumably involve a midfield three of Nemanja Matić/Scott McTominay, Paul Pogba and Fernandes. 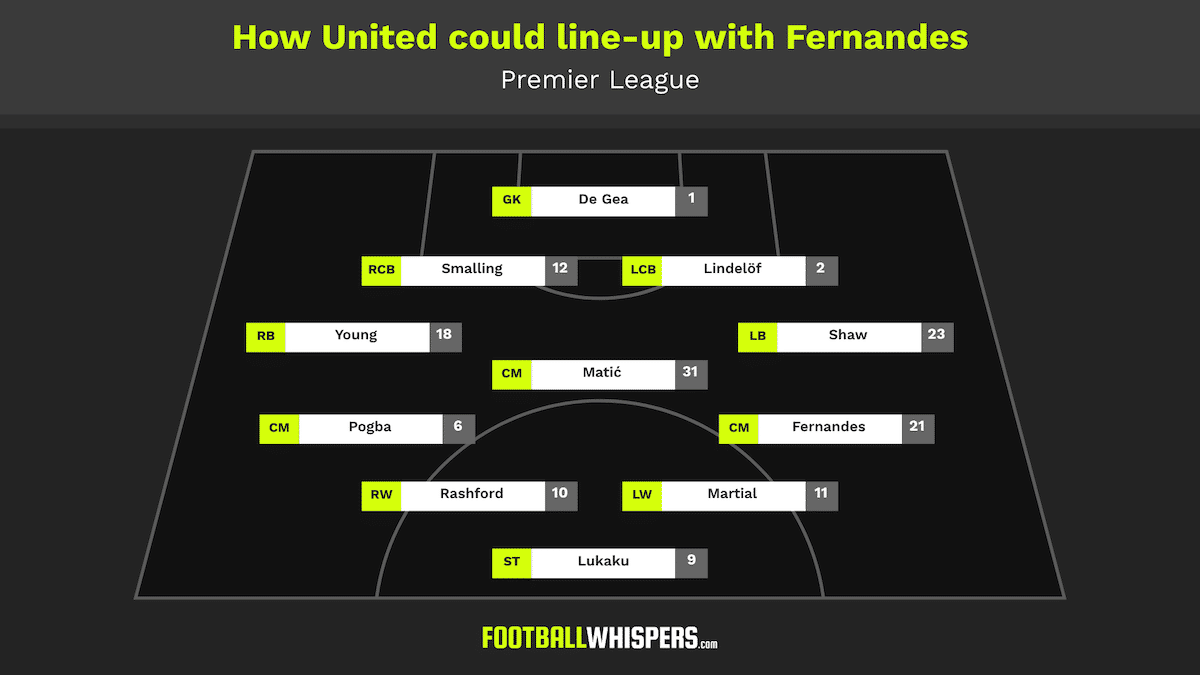 The Sporting skipper can also be deployed on the wing or in the No.10 role of a 4-2-3-1, but it would make sense to utilise his skills from a central base, allowing him to link play between the frontline and midfield as well as take up positions in and around the box, from where he often finds the back of the net (he scored six goals from outside the box during the 2018/19 season in all competitions).

Fernandes' role within Sporting's system isn't too dissimilar to Pogba's remit at United; push forward into the final third, make key passes and pick up scoring positions. Like the Frenchman, he does it very well but having both he and United's No.6 in the same midfield would require a tremendous amount of work on their part to protect the holding player.

Given the duo's attacking tendencies, it would constitute a risk having them as two of the midfield three. But make no mistake; with 5.9 defensive duels won per 90, Fernandes is not averse to the grittier elements of playing in midfield. 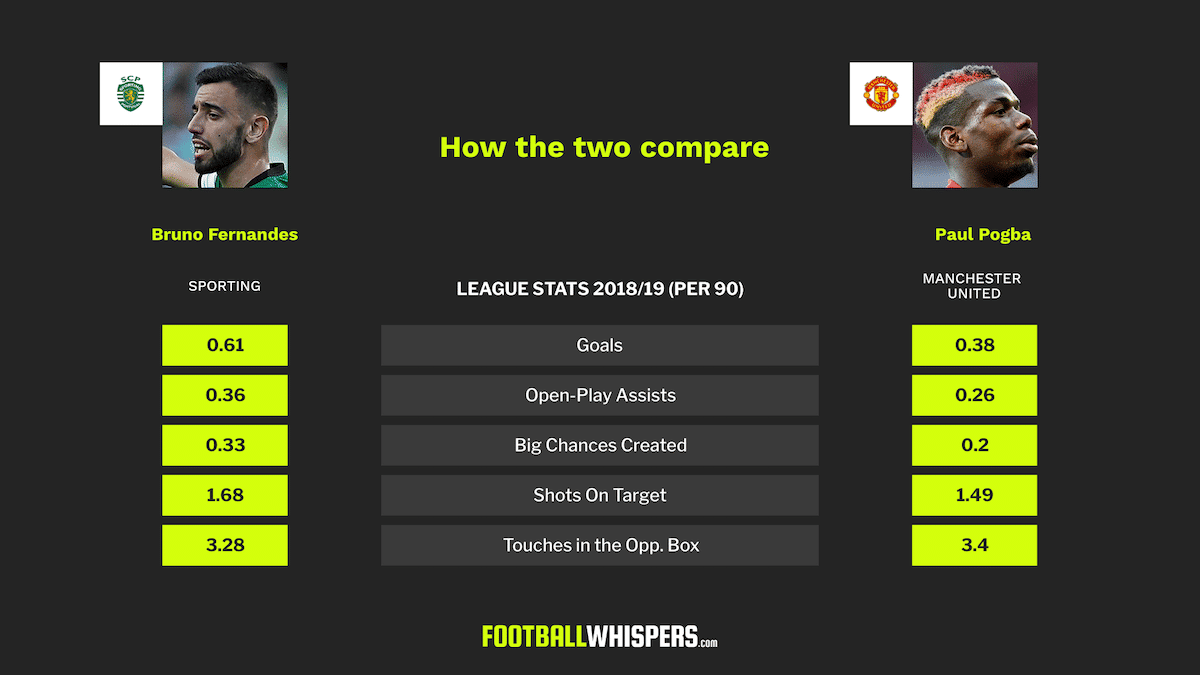 One such solution could be to have Fernandes as the most advanced midfielder in a diamond 4-4-2, possibly behind Marcus Rashford and Anthony Martial, and ahead of Matić at defensive midfield, with McTominay and Pogba as the two centre-midfielders.

This would allow Fernandes to take up a more advanced position and threaten the opposition defence. It would also allow his creative side to shine (his 12 open-play league assists in 2018/19 couldn't be surpassed).

Solskjær has shown tactical versatility during his time at Old Trafford, experimenting with a variety of different systems. With James set to arrive from Swansea, incorporating both he and Fernandes – assuming the latter joins – into his plans will be one of the first great challenges of the 2019/20 campaign.

It's important not to get ahead of ourselves. While it's safe to conclude United's interest in Fernandes is genuine, it sounds as though the deal is by no means over the line. If they land him, though, they will have a hugely exciting player on their hands, one who can offer plenty of goals and creativity.