It’s difficult to shop in the Primeira Liga. The quality on show isn’t what it once was, the big three – Sporting Lisbon, Benfica and FC Porto – are notoriously difficult to negotiate with, and players tend to have excessive release clauses.

Yet those clubs do have a knack for unearthing gems. Ángel Di María, Radamel Falcao, James Rodríguez, Ederson, Jan Oblak, Alex Sandro and many more all made their way to Europe’s elite clubs via Portugal.

It’s why, despite the high fees and difficult negotiations, clubs can’t resist perusing what is on offer in Portugal. One player who will be catching the eye of plenty of clubs is Sporting captain Bruno Fernandes.

The Portugal international was one of the standout performers during the 2017/18 campaign after netting 11 goals in 33 league games from midfield. He also chipped in with five goals in cup competitions to finish the season with 16 goals from 56 appearances.

Not since the days of Frank Lampard and Steven Gerrard had a midfielder offered such variety going forward. Fernandes quickly carved out a name as a long-distance shooter but his knack to arrive in the penalty area at just the right time was what caught the eye. It’s the latter trait that is the transferable skill whereas the former is an added bonus.

A number of clubs reportedly showed an interest in the former Boavista youngster but there was a reluctance to make a firm offer. Perhaps a combination of his contract situation, after he tried to leave on a free after issues with the club, coupled with the fact this the first season he’d posted such numbers meant teams wanted to see whether it was more than just a hot streak.

The dynamic 24-year-old has went about his business this campaign and has shown the world that he wasn’t just running hot last year. 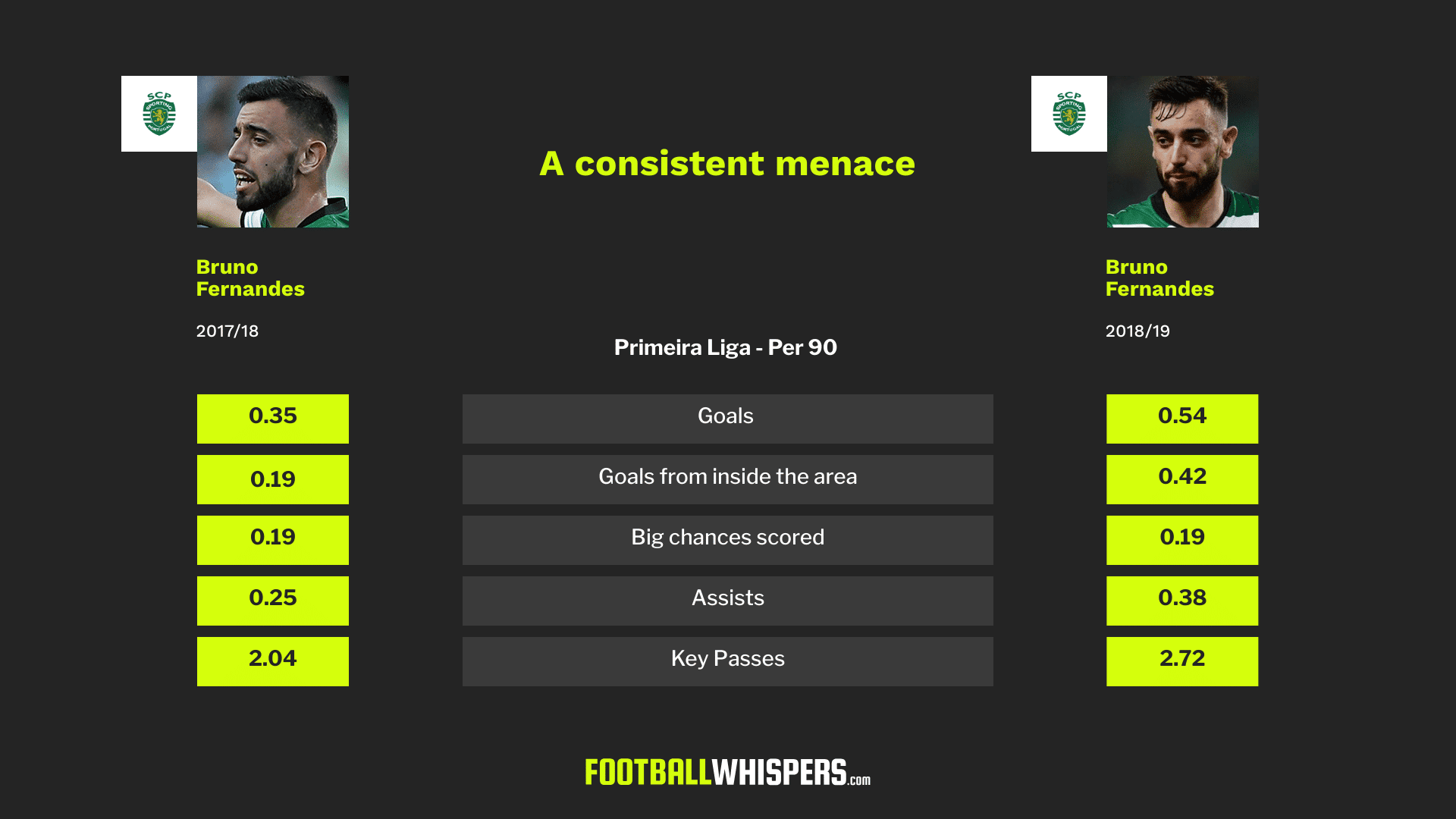 As shown in the graphic above, Fernandes is now scoring at a better per 90 minute rate, up from 0.35 last season to 0.54 this time around. He’s assisting more goals, too, showing his all-round game has developed over the last 12 months and he’s now more influential than ever before for the Verde e brancos.

Perhaps the biggest change for Fernandes and the one that will no doubt interest clubs more than anything is the increase in goals scored inside the penalty area.

It’s up from 0.19 last season to 0.42. Of course, he is on penalty duty, and he clinical from 12-yards, so that will help that particular stat, but anyone who has watched the Portuguese star will know he’s regularly finding himself in high-quality areas inside the area.

And he can finish with both feet, making him even more dangerous than most. 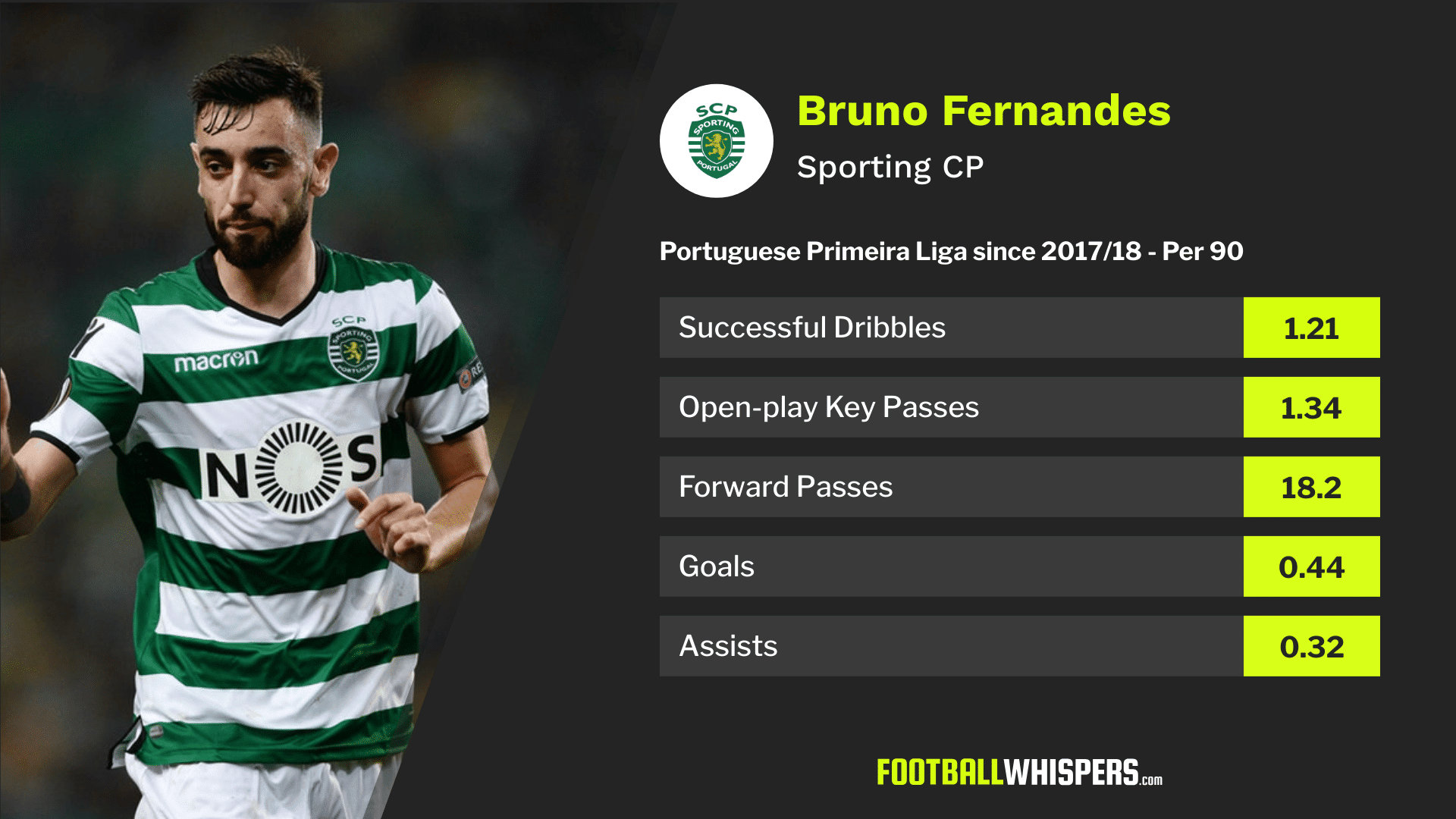 Fernandes' consistency has seen him involved in 0.76 goals per 90 in Portugal since the start of the 2017/18 season having featured in over 5,000 minutes in the Portuguese top flight.

On average, he’s playing 35 per cent of his passes forward showing he’s always looking to progress play. He’s playing a high number of key passes and he can also beat a man with a dribble, showcasing a variety of ways he can beat the defensive lines.

For a bit more context, Dele Alli, another attacking midfield similar to Fernandes, plays just 25 per cent of his passes forward, an average the great David Silva has managed during the 2018/19 campaign too.

Yes, they're playing in different leagues, in different systems and arguably in different roles, but that stat shows Fernandes is always looking to make something happen. He's a creative force as well as a goalscorer. An invaluable combination in the modern game.

He's not just good going forward, either. He also chips in defensively. On average, he wins the ball back on 3.35 times per 90 in the middle third, showing he's adept at playing in a pressing system and having to win the ball back before it reaches his defence.

Fernandes appears to be the real deal. Even taking into account a slight drop off in numbers that would be expected if he jumped to the Premier League, he'd still be posting stats that would see him rival some of the best midfielders in England.

He could play as a number eight in a three-man midfield, a tactic Jürgen Klopp and Pep Guardiola are fond of, or he could be Maurizio Sarri's Marek Hamšík; the goal threat from midfield that Chelsea currently lack.

Perhaps he's the Christian Eriksen replacement for Spurs if the Dane fails to agree on a new deal with the club and departs for Real Madrid. Alternatively, if Ole Gunnar Solskjær continues to use a diamond shape, Fernandes could be the man to fill the role as a No.10.

One thing is for sure, any club which adds the Sporting Lisbon man to their ranks greatly increases the threat they possesses.