Bruno Fernandes had quite the week.

His long-awaited move to Manchester United was completed with the Red Devils parting with an initial £50million to secure his services. The Portuguese midfielder made his debut against Wolverhampton Wanderers in Saturday's ate game and was named man of the match.

Fernades was lauded for his performance against Wolves. He was named in the

Manchester United's Twitter account described the 25-year-old’s performance as lively. And it was. But it was far from perfect and it no doubt gave Ole Gunnar Solskjær a lot to think about heading into the mini winter break.

In his post-match conference, Solskjaer praised his latest signing while having a subtle dig at his forwards when speaking to Sky Sports: “We got Bruno deeper on the ball for us. I felt we controlled the first half as well. In the second half we threatened a little bit more. I feel the ground staff must have moved the goal slightly to the right.

“Bruno is a top player. It's the first game. First half everyone was getting the ball into feet and Bruno is one of those who, when he gets it into feet, he wants players moving in front of him and we didn't move enough in front of him. We moved him further back to get him on the ball more. He'll be a top, top addition.”

There is some truth to what Solskjaer said. At times, the movement ahead of Fernandes wasn't the best. But Fernandes' use of the ball left a lot to be desired, too. And this is what the Norwegian will have to fix in the long-term if United's new No.18 is going to be a success at Old Trafford. 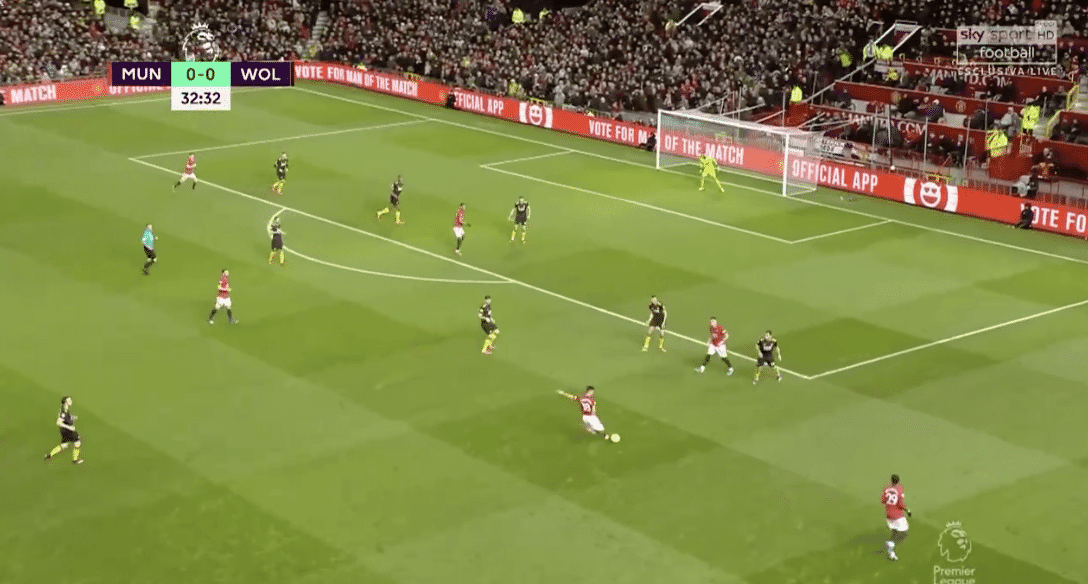 Above is a good example of this. Fernandes fired one at compatriot Rui Patrício but his effort missed the target. United had men forward in this attack and could have worked an opening. The former Sporting man could have played Aaron Wan-Bissaka in down United's right.

He could have worked the ball into the feet of Juan Mata or Anthony Martial. The Portugal international ignored those options and decided to shoot, knowing full well it would take something special to beat Wolves keeper Patrício from such a distance. 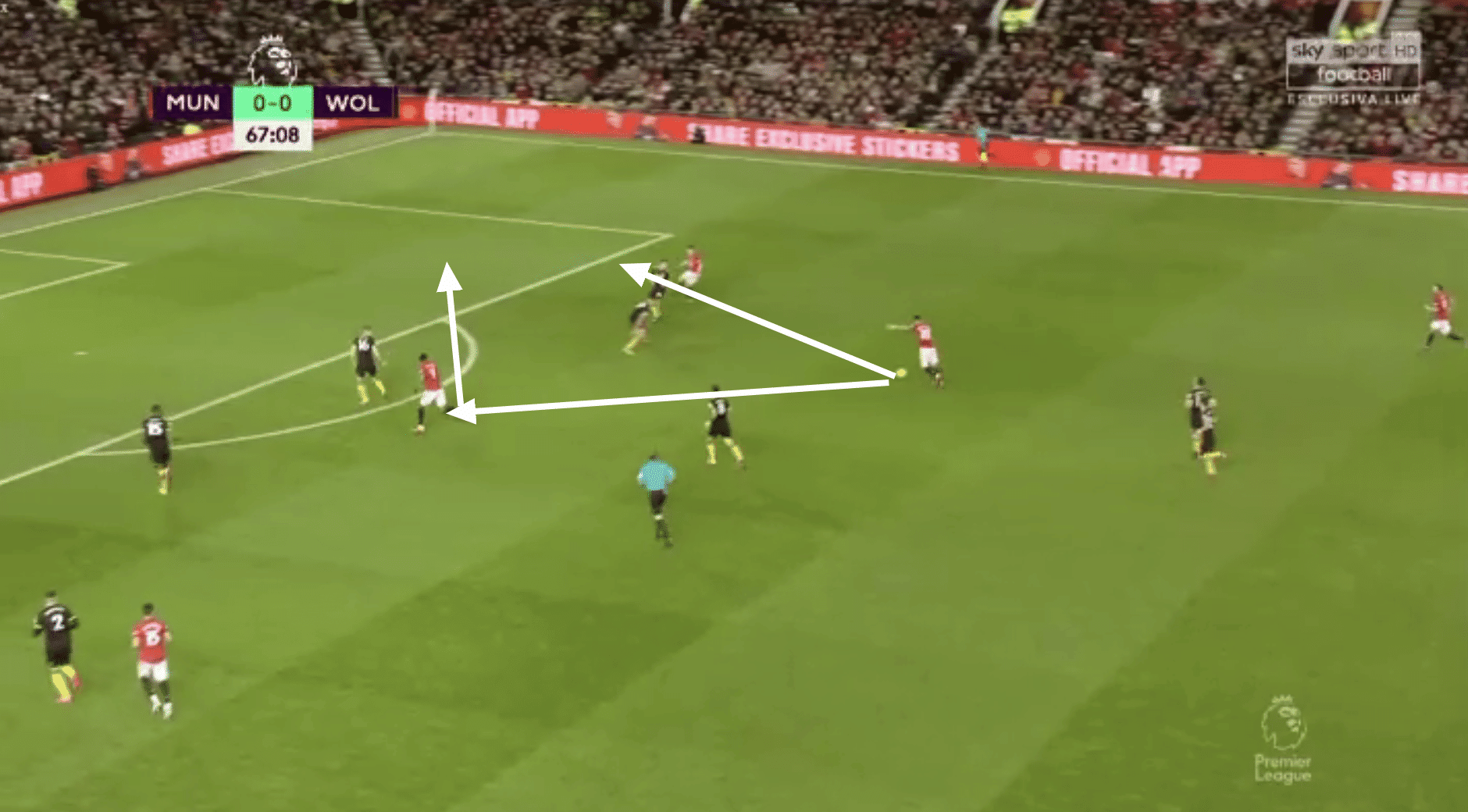 Again, in the still above you see Fernandes ignoring team-mates in better positions to fire a speculative effort goalwards. United's newest signing could have slid Daniel James in down the right with a disguised pass. He could have threaded a pass into Martial who then had an opportunity to pass into space for James to attack.

These passes may not have paid off but teams want players to shoot from 35 yards out. It tends to be a waste of possession and this is what happened against Wolves. United would have the ball in good areas and then Fernandes would sacrifice it.

Perhaps he wanted to make an impression in his first outing for the Red Devils. Perhaps it is something else altogether.

While his highlight reels from Sporting showed a number of stunning long-range efforts, Fernandes thrived when he was able to attack the penalty area without the ball. In fact, nine of his last ten goals for Sporting arrived inside the penalty area. 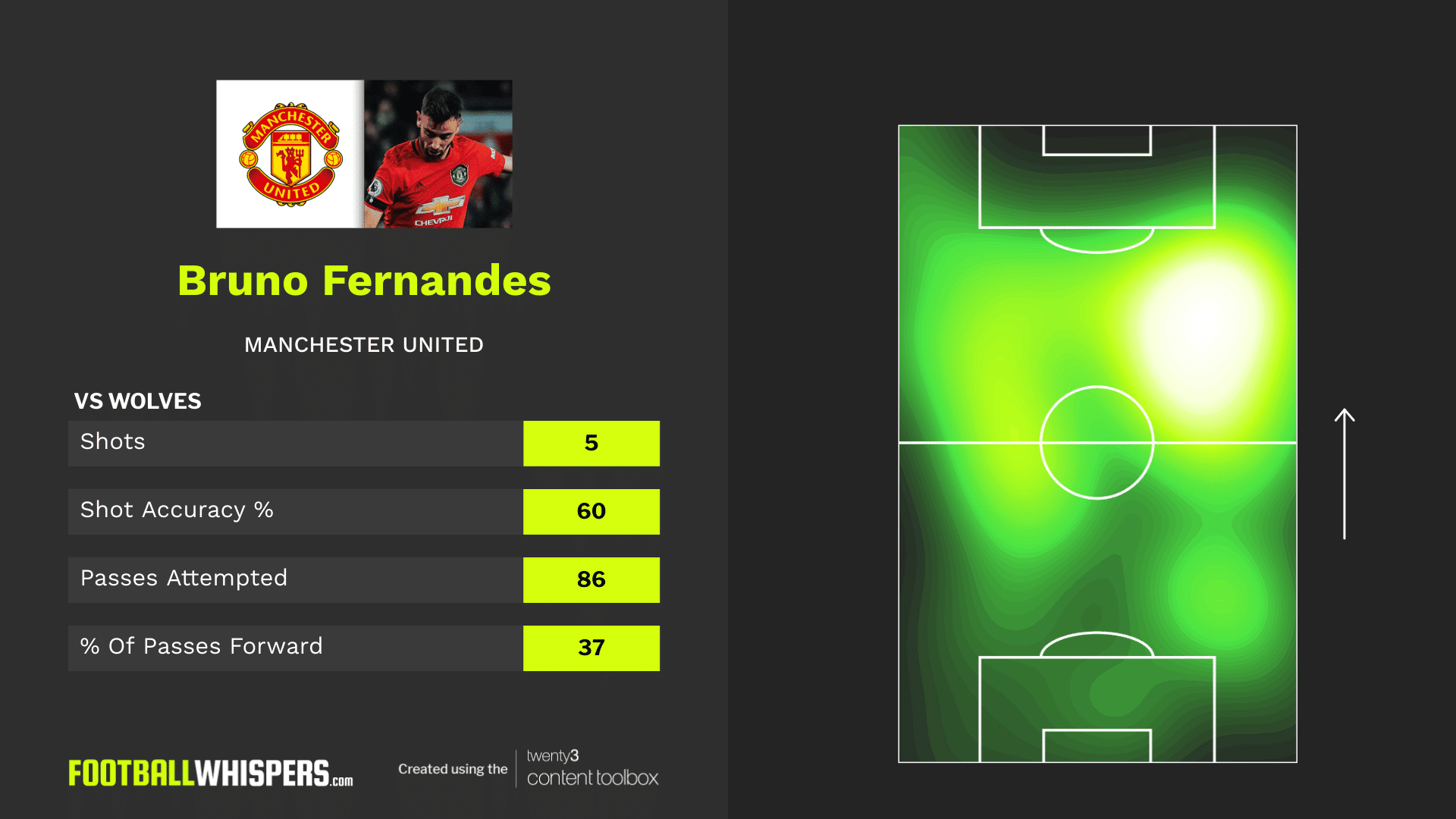 He initially linked up well with Bas Dost before the Dutchman left in the summer. Since then he'd struck up an understanding with Luiz Phellype. Both strikers are target men who dropped deep to retain possession and create space for Fernandes to attack.

Against Wolves, Fernandes didn't have a single touch in the penalty area. For Sporting he was averaging four (per 90). He was also averaging just 80 touches for the Portuguese giants while on his debut for the Red Devils he managed 110. By seeing more of the ball, he's moving further away from what made him so influential in Portugal.

It is one to watch over the coming months but unless Solskjaer is able to replicate the attacking system Fernandes thrived in while playing for Sporting, they might have trouble getting the best out of the 25-year-old. If he's the one who has to adapt his game then he'll be a bit of an unknown and the £50million risk turns into an even greater gamble.