When David Brooks joined Bournemouth from Sheffield United last summer, Eddie Howe was quick to highlight the midfielder's potential rather than what he could immediately offer his side.

The Cherries boss said. “We've seen enough to suggest he is a player who could be outstanding at this level in the future if he develops in the right way and is willing to learn and improve.”

Howe hasn't got too much wrong while in charge of Bournemouth but his assessment of Brooks was off. The midfielder didn't need time to adapt, didn't need to develop. He was ready for the Premier League and proved that from the off.

He went straight into the Bournemouth starting XI and impressed. His creativity, smart use of the ball and goal threat contributed to the Cherries' best start to an English top-flight season.

Brooks only tasted defeat once in his first nine Premier League matches, in which he struck three goals. Soon scouts from Tottenham Hotspur, Liverpool and Manchester United descended on the Vitality Stadium to watch the Wales international in action.

The 21-year-old remains on the radars of English football's biggest sides but Bournemouth have ensured Brooks' future is on the south coast. He has signed a new long-term contract with the club which, at least, ensures they will receive a significant fee if he is to depart.

“When talks started about a new deal it was something I wanted and it didn’t take long to sort out,” Brooks told the club's official website. “When I arrived at the club, not many people would have anticipated the start I have made – myself included.

“I’m happy with the amount of games I’ve played and the performances I’ve put in for the team. I’ve loved every minute of my time here so far and I’m really happy to extend my contract.” 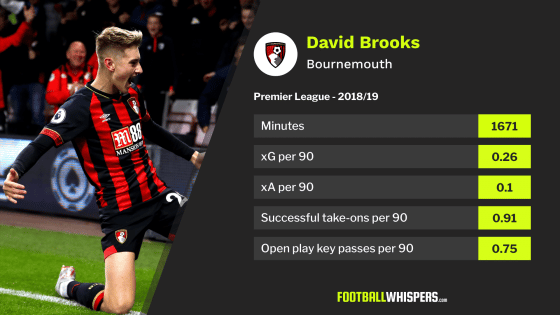 Brooks has proven himself an effective and versatile threat. His goals per 90 of 0.32 is only bettered by ten Premier League midfielders and he has outperformed his open play expected goals of 4.91 with six strikes in the top flight.

But there is still more to come. Brooks can become more decisive, more consistent, and more effective across the pitch.

For example, he is outside of the top 50 for successful take-ons per 90 and open play key passes and, while not his primary role in the side, must contribute more in the defensive phase; he is 82nd and 55th respectively for tackles and interceptions per 90.

Of course, these facets are likely to improve with experience. His reading of the game will be more nuanced, his decision making honed. But let's not nitpick. Brooks is an outstanding talent and Bournemouth are the perfect club to continue his development.