This is a big day out for these teams with the FA Trophy on the line. Who will lift the trophy? Find out with our Bromley vs Wrexham match preview with free tips, predictions and odds mentioned along the way.

Wrexham to win it

We begin our tips today by backing Wrexham to win the match. They had a much stronger league campaign than Bromley, are in better form and have a stronger head to head record. Wrexham have lost just two of their last 10 matches having won six and drawn two. Bromley meanwhile can boast just three wins in their last 10. So, the head to head form, you have to go back over four years for the last Bromley win and three of the last five clashes have seen Wrexham come out on top.

Our next bet for this match is that we will see at least three goals. Bromey have gone over the 2.5 mark in four of their last five matches with a total of 21 goals seen in that period. Wrexham meanwhile have passed the 2.5 goal mark in three of their last five games having seen 16 goals across that period; that gives the two teams goal averages of 4.2 and 3.2 goals per game respectively. That sort of form could well mean we are treated to a footballing feast here.

Here are the key stats & form guide for Bromley vs Wrexham

A Wembley showdown with a Championship place at stake

Wrexham have made plenty of off the field headlines this season with their celebrity owners but now they have a chance to write some history on the pitch. Of course, in Bromley, they have a team that will be playing the villain to stop them.

Bromley have had a rather mediocre league season but that will all be forgotten if they can find a way to win this cup against a much fancied Wrexham. Byron Webster at the back and Michael Cheek are the key men to watch in their lineup.

Wrexham will see this trophy as just a small part of their journey onto bigger things given the ambition of their ownership group. That said, silverware would make an almightily impressive opening scene for the boys owned by Ryan Reynolds and Rob McElhenney. Can they do it?

A quickfire FAQ on Bromley vs Wrexham 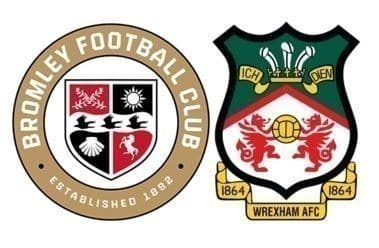