Britt Assombalonga has conquered every level of football he's played at – and he could be set for his biggest test yet amid interest from Celtic this summer.

If reports are to be believed, the Bhoys are in a three-way tussle with Cardiff City and Bristol City to sign the Middlesbrough forward with Boro desperate to offload their prized asset after failing to win promotion back to the Premier League.

At 26, Assombalonga has seen a lot. Yet he very nearly failed to make the grade. It was only while playing at the Hertswood Impact Scheme, affiliated with Watford, that he got spotted in the first place. The Hornets took a chance on Assombalonga who made the very most of the opportunity afforded to him.

A loan spell at seventh-tier Wealdstone was arguably the making of the young forward, who turned heads with 11 goals in a 16-game spell for the Isthmian Premier Division side.

Recalled by the Hornets, the Kinshasa native was immediately loaned out once more, making the step up to National League level to join Braintree Town. Again, this level of football proved too easy and Assombalonga netted five times in as many games for the Essex side.

His next stop was also in Essex at League Two Southend United. He finished the 2012/13 season with 16 goals in all competitions for the Shrimpers, his star very much on the rise.

However, Watford had moved on without their young forward thanks to the takeover by the Pozzo family. Whereas once Assombalonga would have been an important part of the first-team squad upon his return from those loan spells, spots in the first team were virtually non-existent with Troy Deeney, Matej Vydra, Fernando Forestieri and Javi Acuna competing for starting berths.

The time had come to strike out on his own in the Football League. So Assombalonga joined ambitious League One side Peterborough United – the ultimate EFL finishing school – for a reported seven-figure fee, becoming the Posh’s club-record signing in the process. Peterborough have a fine record of polishing up rough diamonds and so it proved once more, Assombalonga hit 33 goals in 58 outings.

By now he was one of the hottest prospects in the entire EFL and when Nottingham Forest came calling Posh turned a quick and sizeable profit on their in-demand striker, pocketing around £5million less than 12 months after signing the striker. Once again he became his new employer's record acquisition with fee potentially rising as high as £8million.

Fifteen goals in 29 Championship appearances was an explosive introduction by Assombalonga. But disaster struck. In February 2015, he was struck down by a serious knee injury, ending his season. It took more than a year for Assombalonga to return to first-team action, making his long-awaited comeback in April 2016.

Eased back in, the goals soon began to flow once more. But as Forest faltered and changed managers with alarming regularity, Assombalonga was identified by Middlesbrough as the man to get them back in the Premier League. So, in the summer of 2017, Assombalonga joined the Teessiders for a club-record £15million. 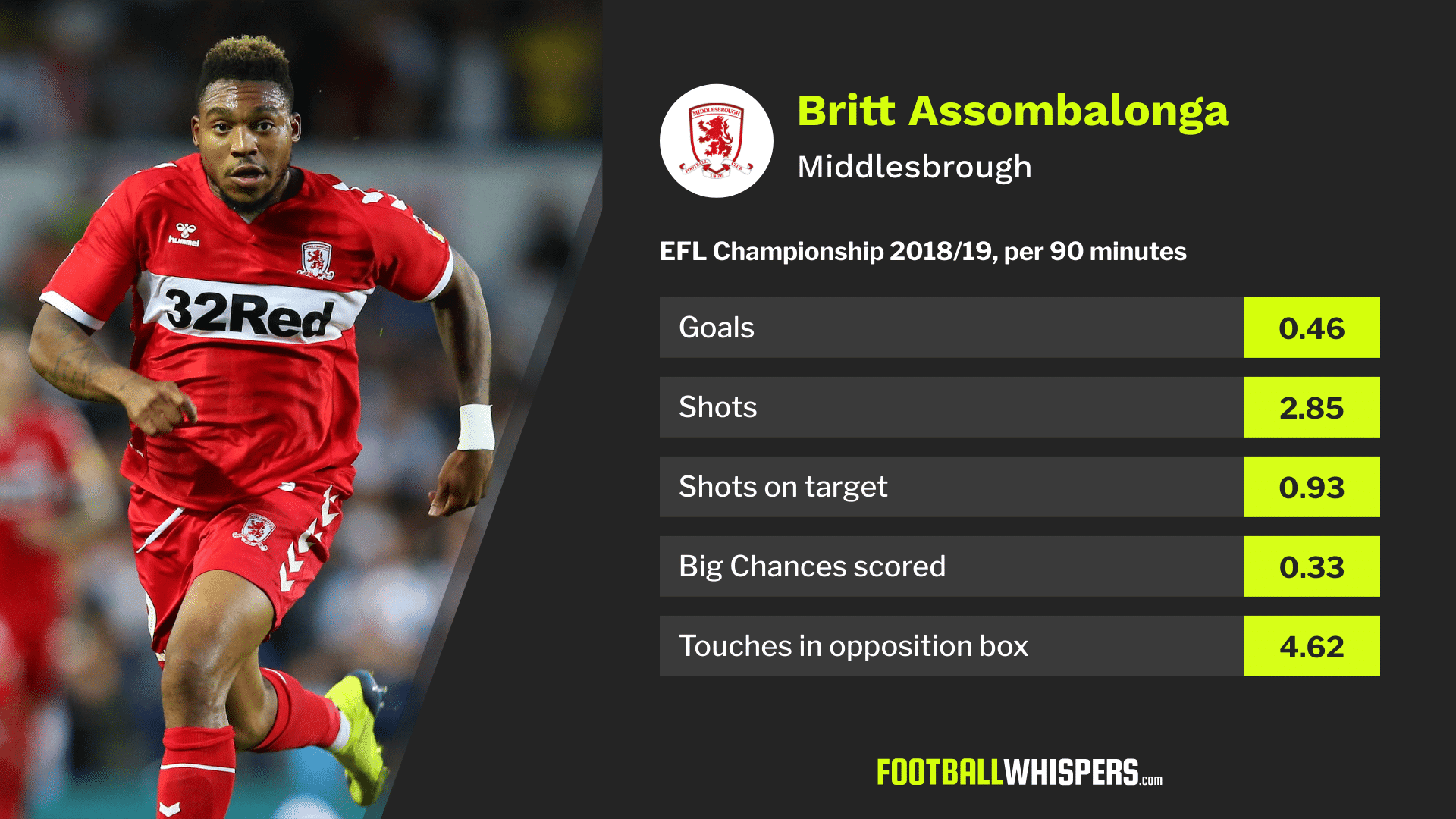 Having proven beyond doubt he is too good for the Championship, the chance to test himself in Europe and play for Scotland's dominant force might be impossible to turn down.

But what would he bring to Paradise?

One glance at his career statistics says goals are a given. Yet Assombalonga's almost one-in-two record of 29 in 62 league starts for Boro is arguably even more impressive once you delve into the numbers.

The 26-year-old only averaged 2.85 shots per 90 last term. That return is predicated on his teammates' ability to create shooting opportunities for him – as a team, Boro took 13.63 shots per 90 last season, the fifth most – of which only 0.93 were on target.

Furthermore, Assombalonga only took 4.62 touches inside the penalty area, ranking him 31st among Championship forwards. The Celtic transfer target can best be classified as a poacher and that much is evident in a number of other metrics.

What gives a better indicator of why he's been so dangerous in front of the goal is the fact he scores 0.33 big chances per 90, which is the 11th-highest figure in the league. If Assombalonga is presented with a gilt-edged chance, he takes it.

Predominantly right-footed but equally comfortable on his left – and with a knack of cutting in before curling home – Assombalonga comes alive in the penalty area. Despite his imposing frame the Boro forward is extraordinarily good at losing his marker inside in the 18-yard box, finding the space needed to make the crucial intervention.

A strapping, bustling physical presence, Assombalonga can hold off defenders, outmuscle them and use his pace to get away.

However, his all-round game could do with some improvement. He failed to record a single assist last season and mustered just 0.83 shot assists per 90, of which only 0.1 constituted big chances. He attempted only 14.15 passes per 90 and completed just 10.7. In a more fluid, footballing side, he will have to become more involved.

Given his pedigree, attributes, and the service in Neil Lennon's side, there is little doubt he would clean up in the Scottish Premiership. Whether or not he would be up to the calibre required for European football is the one question mark.

But with Boro prepared to take a loss on their £15million outlay, Assombalonga could be a relatively low-cost gamble.