Both of these sides had been struggling but a couple of wins for the pair have eased fears. Can either team make it three wins for the campaign?

Find out with our Bristol vs Preston match preview with free tips, predictions and odds mentioned along the way.

Preston arrive in this match having won their last three games. We make the prediction that the winning run ends here though. The reason? Well, Bristol aren't in bad form either with two wins in their last three outings very much changing the atmosphere around the camp. The head to head record points very strongly towards a draw; the last five meetings have served up one win for each team and three draws. When you factor in the current state of affairs both would possibly take a point to further steady the ship after a choppy start to the season.

Our next tip is that both teams will score in this game. Bristol have seen just one of their last five games end with a nil in the score line whist Preston have seen three of their past five matches end with both teams on the scoresheet. Six of the last 10 head to head meetings have ended that way too. With clean sheets a rarity for both teams, BTTS Yes looks a good bet.

Backing the action to end 1-1

The correct score market is always a fun one to bet on even if it can agonise you in an instant. Here we back Bristol and Preston to share two goals in a 1-1 draw. Bristol have scored a total of seven league goals this season; an average of 1.4 per match. For Preston, it's six goals score and an average of 1.2 per game. The goals conceded on either side aren't horrifically different either. To cap the 1-1 prediction off, two of the last five h2hs ended that way.

Latest odds and stats for Bristol vs Preston

Bristol City stuttering start to the season looks to be fading away after a couple of recent wins. Nigel Pearson will know all to well how quickly that nagging doubt could return to the terraces though and anything but a positive result against Preston won't help. The Robins really could have done with landing a physical presence up top in the transfer window after losing Famara Diedhiou but it didn't happen. Can Andreas Weimann deliver in a different way? As for Preston, it's a similar story in respect of form. They'd started the season horribly but after three wins on the bounce the mood amongst the squad should be much better. Emil Riis, in particular, will be buzzing after hitting three goals in two games.

Pre-game questions for Bristol vs Preston 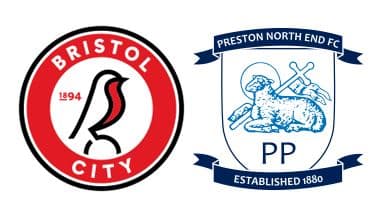