This match doesn’t matter one bit. Bristol Rovers are a League Two team and Crewe are content in mid-table. It's just about pride now. Can Bristol Rovers find just an 11th win of the season to move off the bottom? Find out with our Bristol Rovers vs Crewe match preview with free tips, predictions and odds mentioned along the way.

When it comes to explaining why we make certain tips, this prediction is one of the easier ones. Bristol Rovers have failed to score in six of their last 10 games and four of their last five at home. Crewe have recorded three clean sheets in their last five away games. Both those things combine to make this bet look like pretty reasonable value.

With the prediction already made that Bristol Rovers won't score you might already have been thinking down the route of there only being a couple of goals in the match. We'd agree. All of Bristol Rovers last four have come in with a maximum of two goals with just one of their last six at home breaking the 2.5 mark. Crewe drew 2-2 away at Charlton last time out but that's the only game of their last five on the road that has seen three or more goals.

Owen Dale to bang in another goal

Although we're predicting the match will be fairly low scoring there is a young man that will fancy his chances of being amongst the goals; step forward right winger Owen Dale. Dale, 22, netted a brace against Charlton in the week to bring his tally for the season to 11 goals. With three in as many games it's fair to say confidence will be high so if he gets half a chance, there is a good possibility he takes it.

From bad to worse for Bristol Rovers

Bristol Rovers already know they'll be playing League Two football next season even if Joey Barton refuses to accept relegation on his CV. Now they're playing not to finish bottom of the league. In their way is a Crewe side who are showing considerably more fight and passion than their hosts despite the fact they're safe and sound in mid-table. 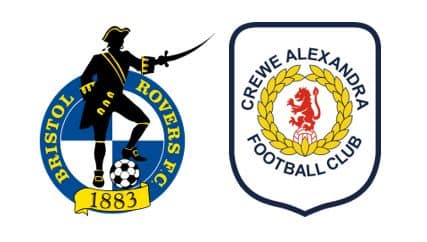