Peterborough rallied late on in the week but ultimately couldn't find a way to bag three points against QPR. Can they manage to do it against Bristol City? Find out with our Bristol City vs Peterborough match preview with free tips, predictions and odds mentioned along the way.

Robins win to leave Posh on brink of drop

Encounters between Bristol City and Peterborough have mostly been high-scoring games; eight of their last nine meetings went above the 2.5 goal mark. It's worth noting that these teams have conceded a lot of goals this season; as a matter of fact, only two teams (Peterborough included) have allowed more goals than Bristol City. Because of the way these teams concede goals, their games tend to be high-scoring games; four of Peterborough's last five, and 16 of Bristol City's last 19 league games went over 2.5. With this in mind, this will likely be a high-scoring affair.

Bristol City vs Peterborough: Let's look at the predicted lineups

There might be two teams in this game but it's all about Peterborough. They are on the brink of relegation now with every game feeling like a “must win”. They won't expect any favours when they arrive at  Ashton Gate.

Bristol City have been going through a rough patch the past two months; they have no wins in their last three games, and they've won just one of their last seven games. Nigel Pearson's men will welcome Peterborough to Ashton Gate on Saturday; they'll hope to put an end to their unwanted streak.

Things have not gone too well for Peterborough this season; they are last on the Championship table, with just six wins in 40 league games. Grant McCann's men won just one of their last 14 games across all competitions; they will fancy their chances against an equally struggling Bristol City side.

A quickfire FAQ on Bristol City vs Peterborough 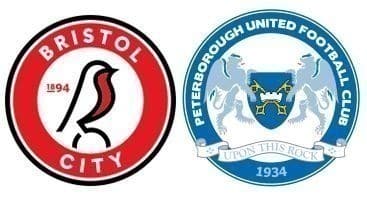