Nottingham Forest are a team reborn since their managerial change and it already looks to have been proved the correct decision. Can Bristol City deliver a first defeat for new boss Steve Cooper? Find out with our Bristol City vs Nottingham Forest match preview with free tips, predictions and odds mentioned along the way.

Bristol City might sit 11th – five places above Nottingham Forest – in the Championship table but don't be fooled; it means very little. Firstly, their position in the table is underpinned by good away form; they'd be second if only away matches counted. What does that mean? Well, in a nutshell, their home form is toilet. In six attempts they are yet to win a match. Given Nottingham Forest also have one of the best away records in the league including a three game winning streak on the road and an away win looks like the best bet.

When it comes to total goals a look over general form could swing either way. We've focussed on the respective home and away form of both teams though and settle on an under 2.5 prediction. Why? Well, all of Bristol City's last five home games have been under 2.5 goals with a game average of 1.4 goals per game. Nottingham Forest's record isn't as clear cut but three of their last five on the road have been under 2.5; their game average in that period has been 2.0. The last three h2h games at Ashton Gate have ended under 2.5 as well.

Our third and final tip is a simple one; get on Lewis Grabban to score at anytime in this match. Nottingham Forest's 33-year-old hasn't been tasked with playing every minute of every game with his advancing years but when he is on the grass he is really dangerous at this level of football. Since Chris Hughton was sacked, Grabban has scored four goals with one in each of his last three outings. If anything drops his way in or around the box you know there's a good chance he'll bag.

Find the best odds for Bristol City vs Nottingham Forest

Bristol City vs Nottingham Forest: What to expect

Bristol City were battered 0-2 against Bournemouth on Saturday as they gave up 73% of the ball and allowed 22 shots on their goal. It was a rather ugly performance in truth. Joe Williams was subbed after just 12 minutes in that game so you assume he'll join the likes of Antoine Semenyo on the injury list. As for Nottingham Forest, it's very much happy days under Steve Cooper. He'll simply ask for more of the same as his team with our goal scorer tip, Lewis Grabban, very much a man in form. 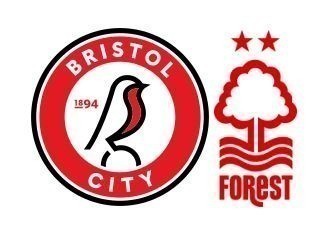