There's an old adage in football that teams with a strong spine often excel. Given Chris Hughton is a man who subscribes to that view.

Yet the one position that is still being fought over is that of left-back. Markus Suttner has started in 12 games, while Gaëtan Bong has been given the nod in the other ten. But who deserves the starting spot? We’ve taken a look.

It was no surprise to see Brighton enter the market for a left-back in the summer. In 2016/17, Bong battled for the spot with Sébastien Pocognoli, who was on loan from West Bromwich Albion.

The Cameroonian made 24 appearances as the Seagulls were promoted from the Championship. The Belgian made 21, so there was no clear first choice in Hughton's mind/

With Pocognoli returning to West Brom and leaving England following the expiry of his loan deal at the Amex, Hughton needed another left-back to challenge Bong.

Not entering the market would've been a massive it a massive risk given Bong's injury record, even if the likes of Liam Rosenior can play there. Cover was needed.

So Suttner came in. He joined July, with Hughton telling his side’s official website: “He has a great level of experience internationally, and in the top divisions in both his native Austria and Germany, where he has played the last two seasons with Ingolstadt, and that experience will serve us well.

“He will add competition at the back on the left side of defence, and I'm now looking forward to working with him.”

With 12 appearances to Bong's ten, Suttner definitely provided competition, but how do the two compare stats wise?

As you can see, between the two of them there’s not too much in it. 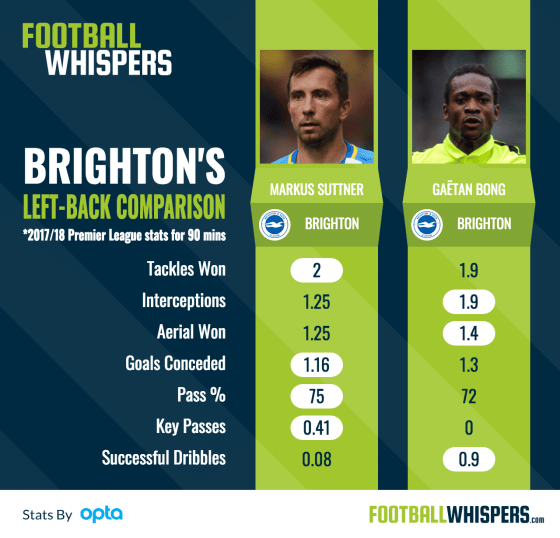 But, Brighton have conceded fewer goals when the Austrian’s been on the pitch, just 1.16 rather than 1.3.

In terms of passing, Suttner comes out better, with a completion rate of 75 per cent to 72 per cent. He also makes considerably more key passes per 90 (0.45 to Bong’s zero).

But the Cameroonian does offer more with the ball when he has space to move forward into. He averages 0.9 successful dribbles per game compared to his teammate’s measly 0.08. That number also goes a way to explaining why he’s dispossessed more often – 0.5 times per 90, rather than 0.16.

Having that counter attacking outlet is probably why Hughton seems to prefer Bong away from home.

And with the Seagulls boss stating that he’s not expecting too many arrivals in January, it would suggest he’s happy with the current situation that sees the two fighting it out among each other for the left-back spot.

But should he be aiming higher?

We’ve had a look at how the Brighton duo compare to the left-backs for the clubs one place below and above the Seagulls, which coincidentally are the two sides that were promoted with them from the Championship last summer.

For Huddersfield Town, we’ve compared the Seagulls pair with first-choice left-back Chris Löwe, while for Newcastle United, we’ve looked at the statistics of Javier Manquillo, who has been featured regularly on the left of Rafa Benítez’s defence.

Comparing the four of them, once again, there is no real standout. 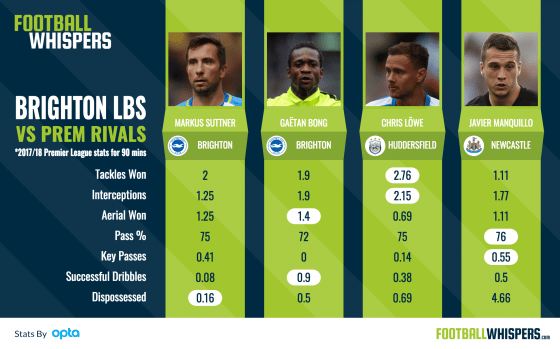 Each of the four come out on top statistically in different categories. Suttner is dispossessed the fewest amount of times, Bong makes the most interceptions and successful dribbles per 90, while Löwe wins the most tackles (2.76) and interceptions (2.11). Manquillo’s passing accuracy (76 per cent) and key passes (0.55) see him lead the passing statistics.

So the two left-backs at the Amex compare favourably to their rivals but do not stand out. At this present time, they're what Brighton need.

But should the Seagulls stay in the Premier League, left-back may well be an area Hughton will look to strengthen in the summer.