Brighton have played some good football at times this season but converting their chances almost cost them their Premier League status and improvements will be required in the 2021/22 campaign. West Ham have lost three of their last four league games and if that form continues then David Moyes' side will miss out on European football next season.

Read on for our full match preview and prediction for Brighton vs West Ham in the Premier League.

At least three goals have been scored in five of the last seven league meetings between these two clubs and we're expecting another end-to-end 90-minutes between the pair this Saturday. Brighton's last game against Wolves produced over 2.5 goals as have four of West Ham's last six fixtures.

Brighton looked good for their 1-0 lead against Wolves until Dunk got himself sent-off and that allowed the hosts back into the game and lead to Wolves claiming a 2-1 win late on. Thankfully for Brighton, that result didn't matter in the end as Fulham became the third and final team to get relegated this season, but the Seagulls must improve over the summer of risk being in another relegation battle next season. With Dunk and Maupay suspended and Lamptey and March out injured Brighton will be hoping to welcome Lallana and Veltman back into the side to face West Ham.

The Hammers could have Rice, Masuaku and Noble back from injury in time to make the trip to the south coast but both Cresswell and Lanzini picked up muscle injuries in the defeat to Everton and will be to be assessed. A solitary goal from Dominic Calvert-Lewin proved enough to condemn West Ham to their third defeat in four matches and now the likes of Liverpool, Tottenham and Everton are all within touching distance. West Ham can't afford to be losing so many games if they want to qualify for Europe, especially now that Chelsea are 6pts clear in 4th, making Champions League qualification highly unlikely. The Hammers need a win this weekend and will be hoping that their counter-attacking style catches Brighton out on Saturday. 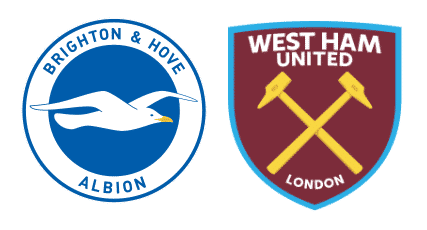