Brighton sit above Leicester in the Premier League table as things stand but a win by two goals or more would take the Foxes above their hosts this weekend. Leicester have a very good recent record against the Seagulls and go in search of their fourth straight win against them this Sunday.

The Foxes have won five of their last six encounters with Brighton and haven't lost against the Seagulls in the Premier League. Leicester claimed a 2-1 win at the AmEx last season and have won three and drawn one of their four trips to that stadium since Brighton earned promotion to the Premier League back in 2017. While Potter's side have made an impressive start to the season, Brighton did lose their last home against Everton 2-0.

We're not expecting to see both teams score in this weekend's clash as only one of the last five meetings between these two clubs have ended with both sides getting on the scoreboard. Only one of Brighton's last six fixtures have seen both teams score and just two of Leicester's last five outings have produced goals at both ends of the pitch, so you can see why we've gone with BTTS – No.

In terms of a final scoreline, we're predicting a narrow 1-0 win for Leicester. The visitors played in midweek against Napoli and may have to rotate an already stretched squad for the trip to the south coast. Under 2.5 goals have been produced in five of Brighton's last six matches and with the hosts failing to score in their last home game, a 1-0 win for Leicester looks like a decent bet this weekend.

Brighton: Lamptey, Mwepu and Burn have all been ruled out of this weekend's clash through injury but Connolly, Locadia, Gross and Webster could return to the squad.

Leicester: Perez is still suspended, while Justin and Fofana will both miss out for the foreseeable future due to injury.

A last-minute effort from Trossard saw Brighton pitch all 3pts away at Brentford last weekend, taking the Seagulls onto 9pts for the season and into the top six. However, an even tougher 90-minutes will be expected on Sunday when Brighton welcomes Leicester to the AmEx, a team the Seagulls have never beaten in the Premier League before.

Leicester slipped to a 1-0 defeat at home against Man City last time out and will be looking to bounce back against a Brighton side they have really enjoyed playing against in recent years. The Foxes have been hit and miss in the Premier League this season but injuries haven't helped Brendan Rodgers' side. In their last away game, Leicester secured a 2-1 win over Norwich and while they aren't at their free-flowing best right now, they are more than capable of picking up results.

Your Questions for Brighton vs Leicester 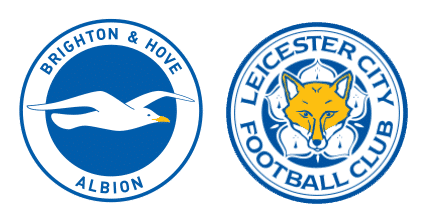