With the World Cup taking place this summer getting business done early is imperative if clubs are to avoid paying a premium.

There’s a real risk of missing out altogether, too, if buying clubs do not close deals before the tournament kicks off in Russia on June 14.

And with that in mind, it looks like a number of Premier League sides are starting to up the ante in the chase for Nigeria winger Moses Simon.

According to The Sun, he is a Newcastle United transfer target, while Brighton and Hove Albion are also interested in him. Liverpool are also said to be among his suitors.

Born in Jos, Nigeria, in 1995, Simon stared his career at the GBS Academy, which is highly regarded and has produced a number of professionals, including Leicester City striker Ahmed Musa.

His impressive performances while at GBS saw him linked with Tottenham Hotspur and Liverpool, as well as Dutch giants Ajax. Simon ended up signing a pre-contract agreement with the Amsterdam side in May 2013, joining the up with the first team for pre-season.

He came on in a friendly against De Graafschap, scoring the third in a 3-0 win, and played for Jong Ajax in another match against Voorschoten '97, a 5-0 victory in which he also found the back of the net.

Despite that, Ajax decided not to sign the Nigerian permanently. Instead he signed for their partner club in Slovakia, AS Trenčín in January 2014.

While in Slovakia, he made 33 appearances, scoring 17 goals. That included a hat-trick in a 4-0 win against FK Vojvodina Novi Sad in the 2014/15 Europa League.

Trenčín lost to Hull City in that competition, but Simon impressed against the English side and was linked with a move to Yorkshire.

He broughts two years in Slovakia to an end not by moving to the Premier League, but to Belgium, joining Gent on a three-year contract in January 2015.

His move to Belgium also saw him earn his first international call-up, coming on against Uganda in March 2015. Simon now has 17 caps and four goals for Nigeria.

Despite that, his career with the Buffalos started badly when he was sent off just 30 seconds after coming onto the pitch in his second league appearance for the club.

The winger made up for that by scoring a hat-trick against Sporting Lokeren in just his third outing for his new club.

Simon soon became a key player in the side, helping Gent to their first ever Belgian Pro League title in 2015.

The Nigerian hasn’t been as prolific in Belgium, with 20 goals in 128 games, but that is still a pretty decent return for a midfielder and looks like he’s ready for his next move.

What are Simon’s main strengths?

Simon’s game is built on his speed and, like any good winger, his biggest assets are his turn of pace and use of his acceleration to get away from opposition defenders.

He notices empty spaces behind the defenders and can make deadly runs into those spaces.

You can see that in the stills below from the game against Royal Excel Mouscron. 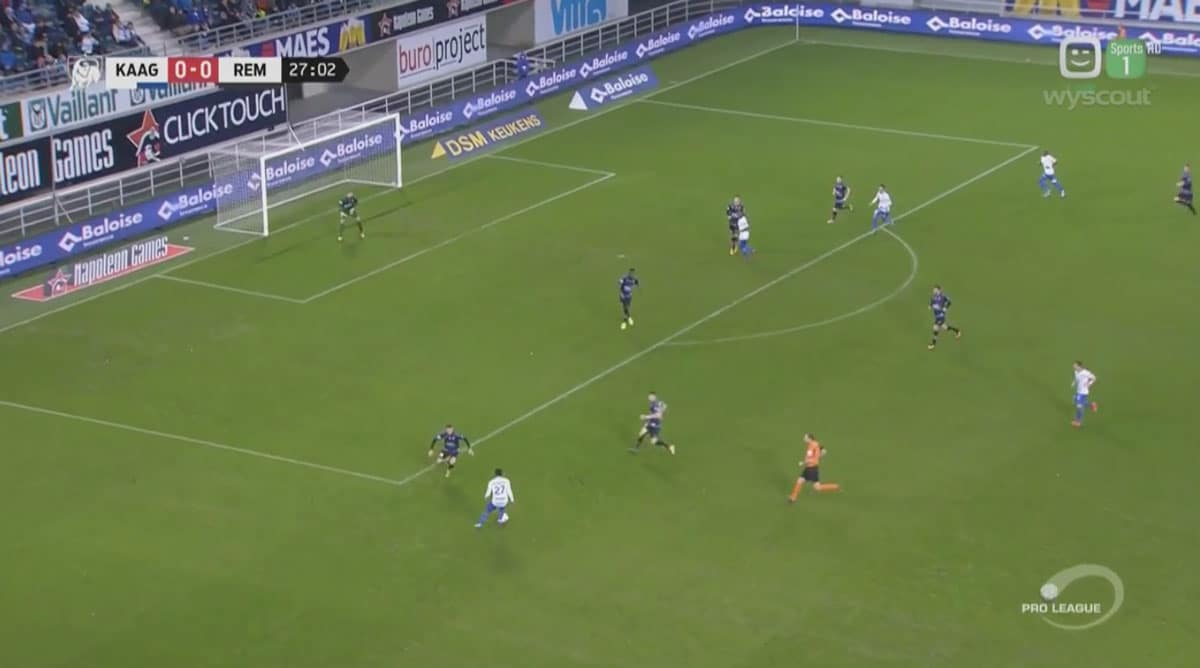 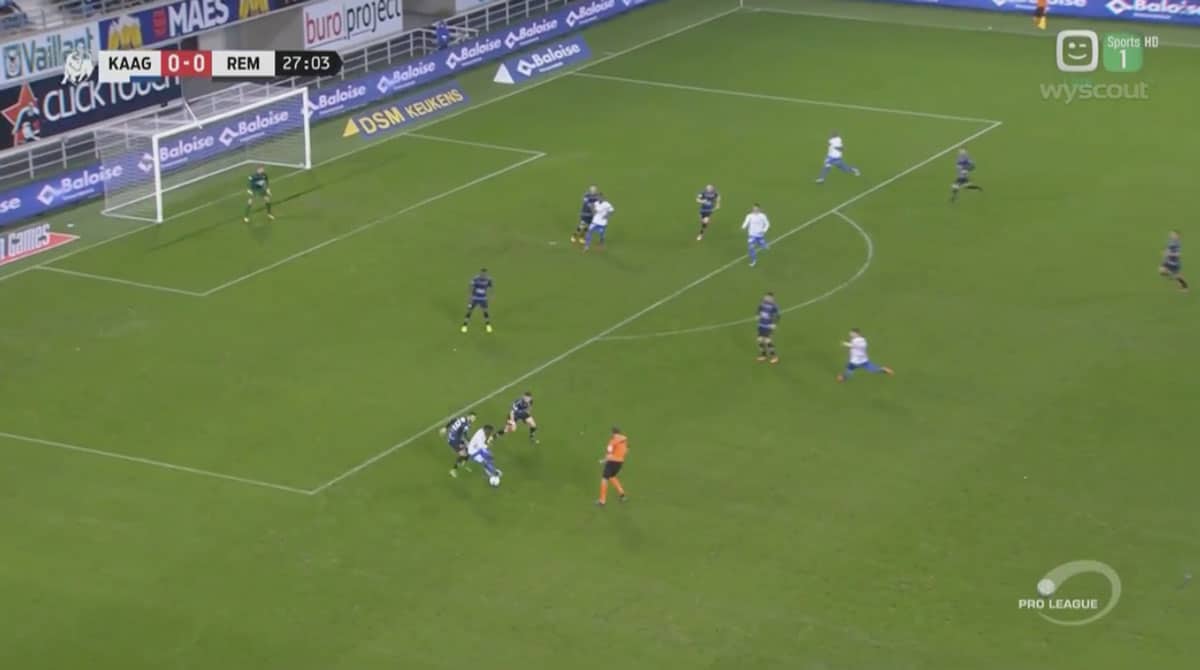 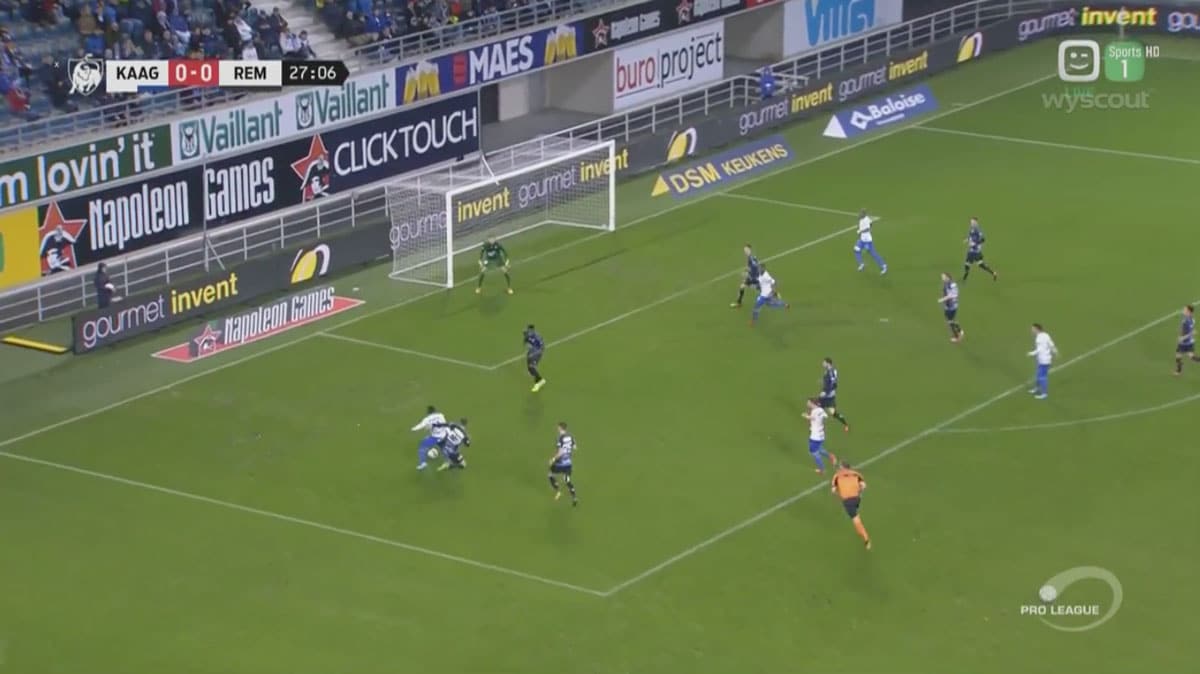 The winger cuts inside, before turning quickly and leaving the defender for dead.

He runs into the space behind the defence and is in a dangerous position when the opposition player takes him out for a penalty. 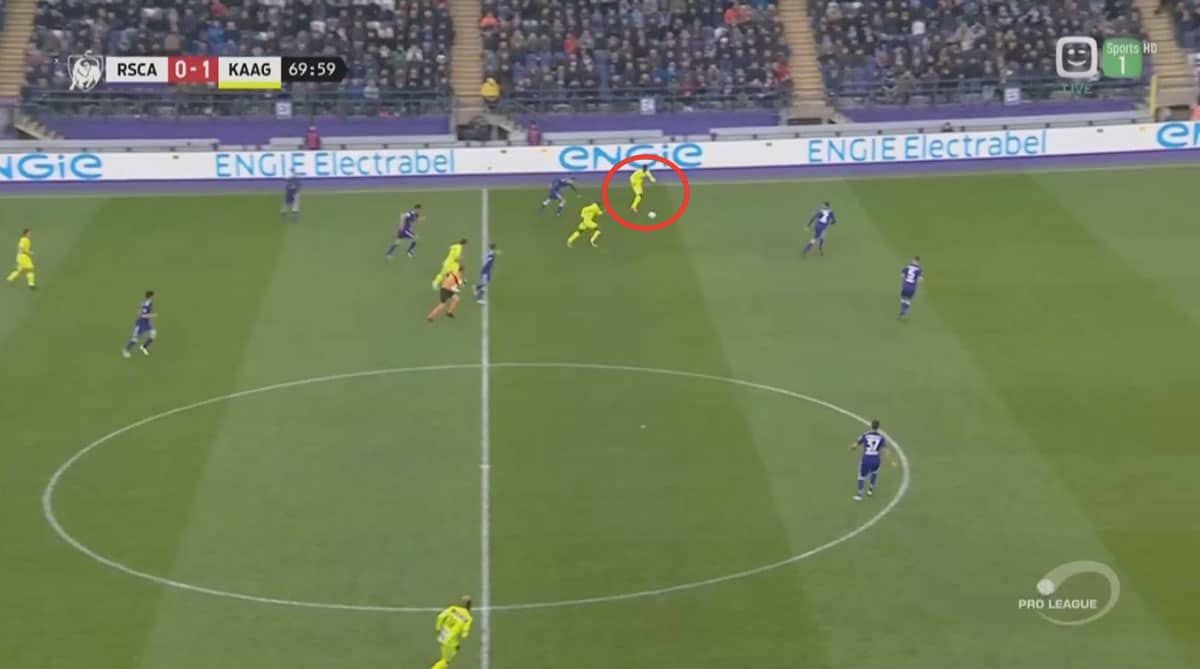 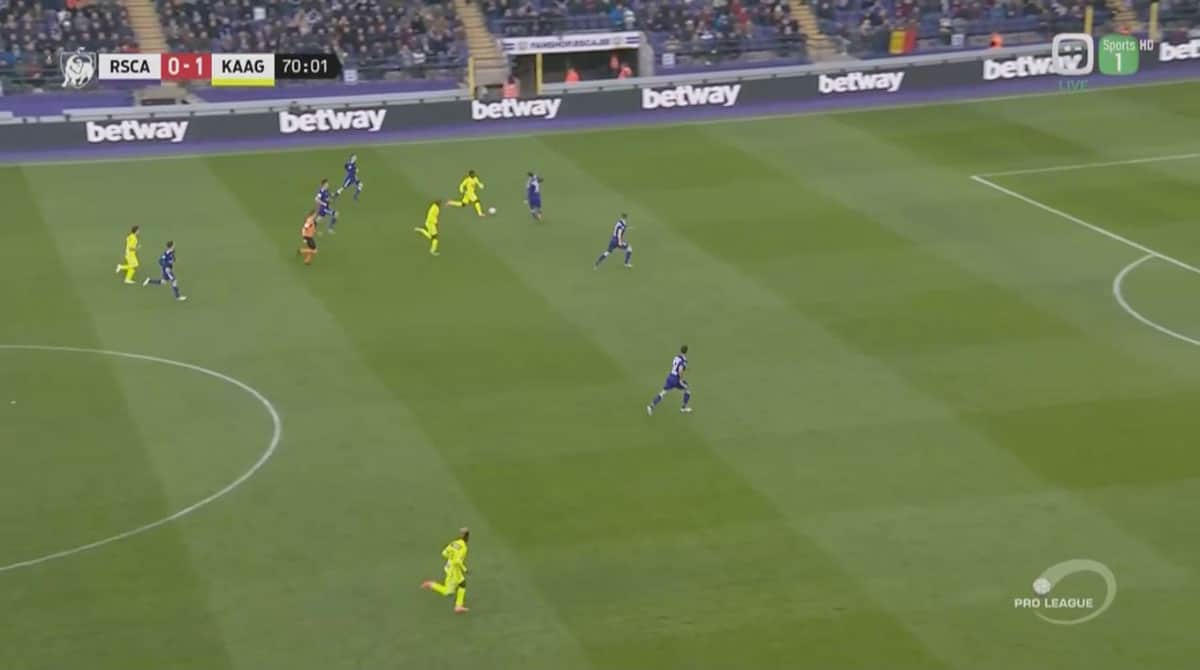 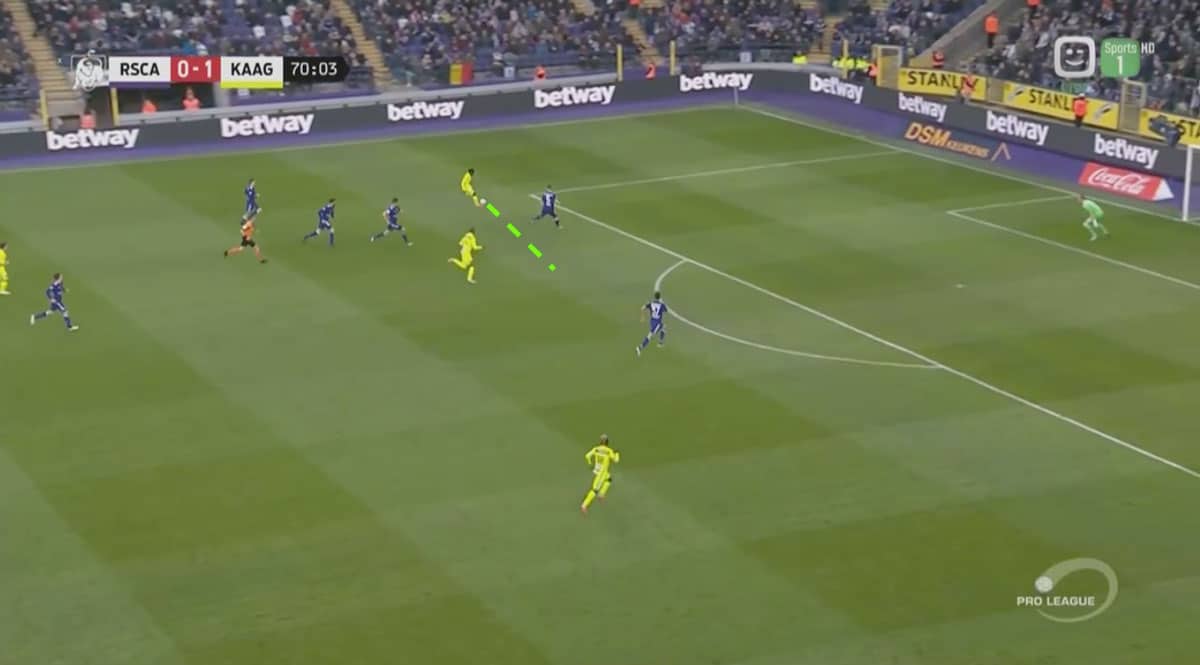 Simon’s tricky wing play is evident in the stills above, taken from a match against Anderlecht.

He picks the ball up on the left and beats a couple of players with his pace before playing the ball into his team-mate to get a shot away.

But it’s not all about his pace. He has the ability to pick out a ball too. Per 90 minutes, Simon averages 1.35 key passes. That puts him in the top six per cent of all Jupiler League players to have played in at least 25 per cent of league games this season. 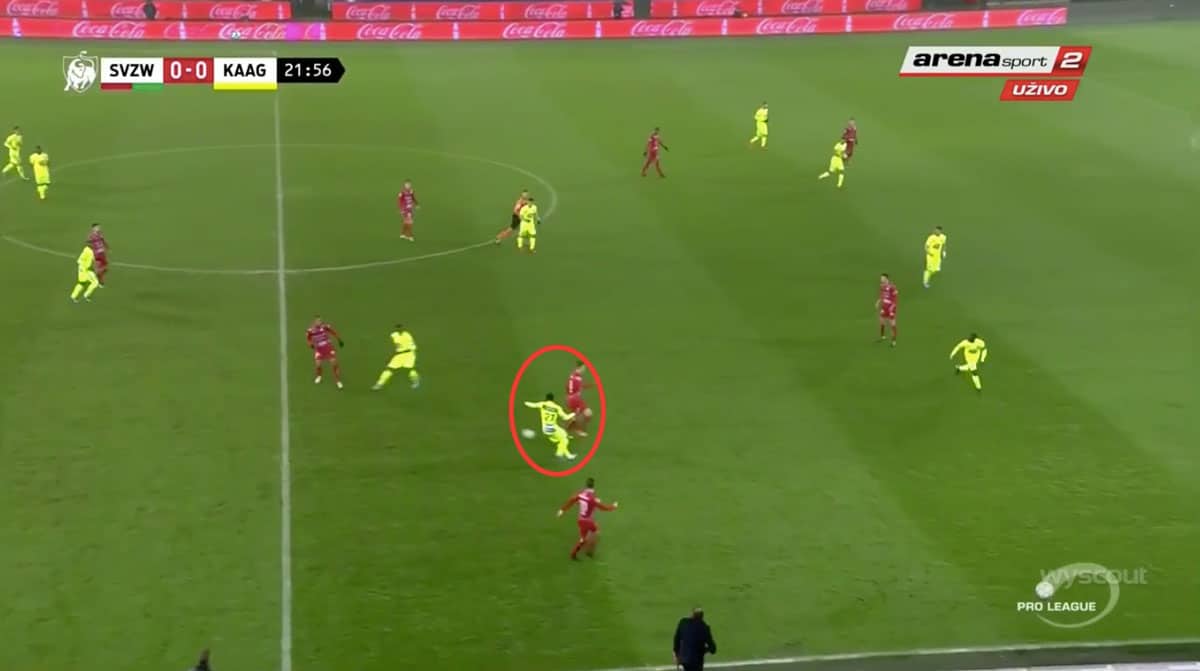 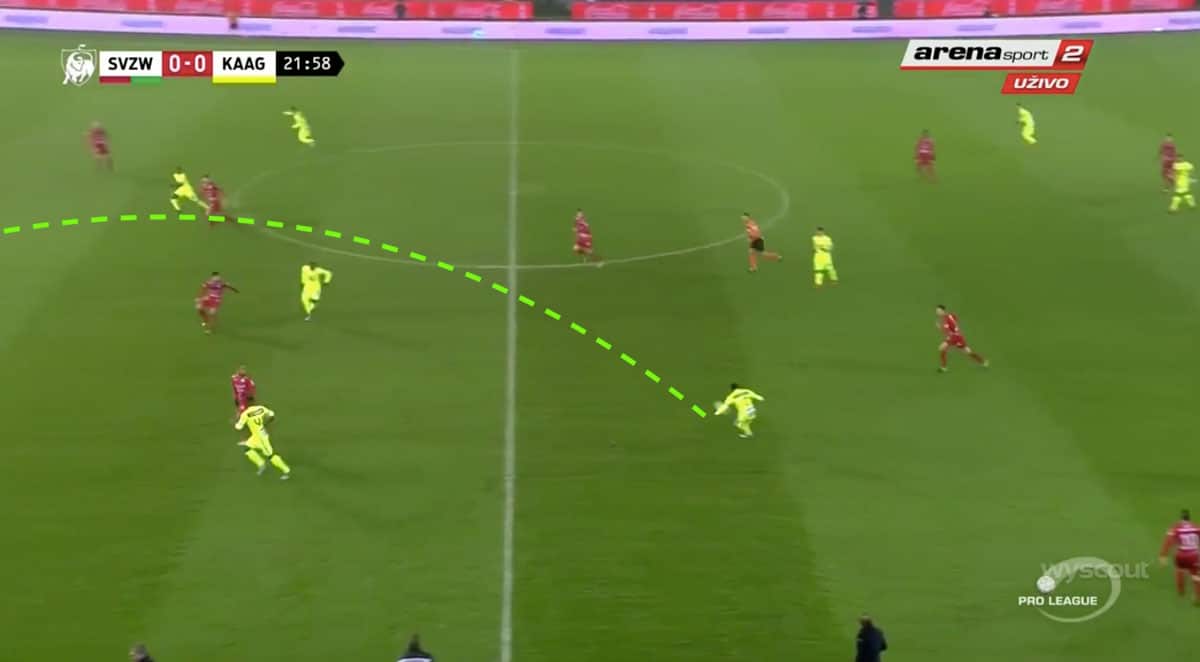 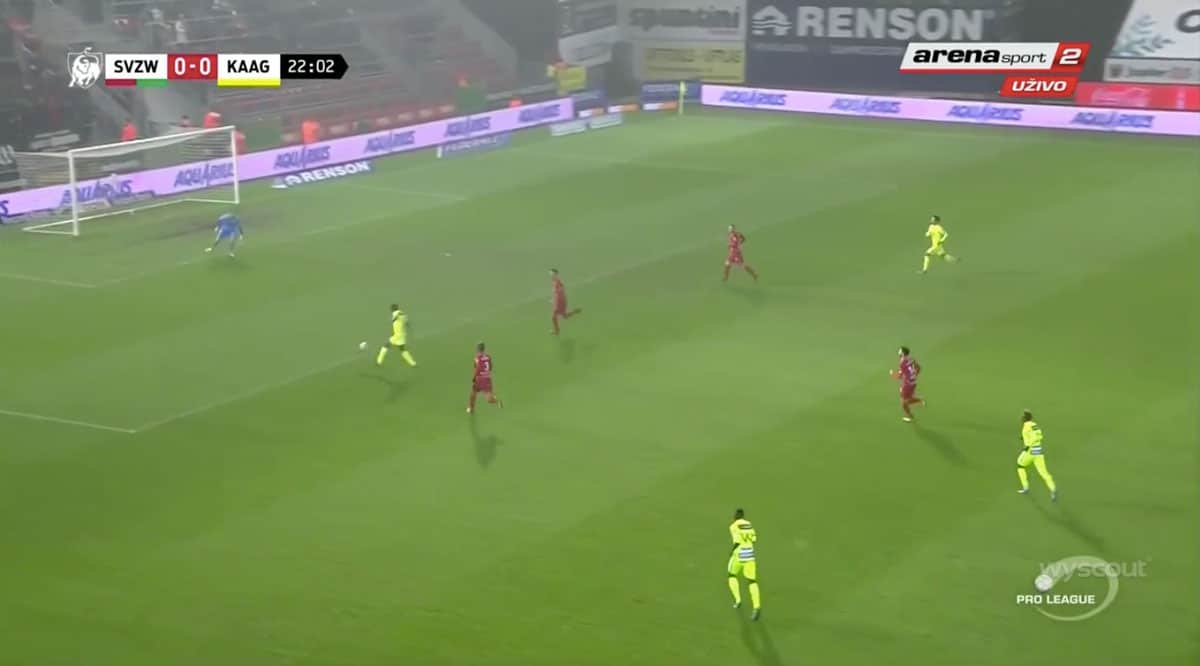 His passing ability is evident in the stills above, taken against Zulte Waregem, where he picks the ball up out wide before floating a lovely cross into his team-mate.

The last slide you see above is his team-mate’s first touch, underlying the precision of the pass, allowing him to break away into the box and get a shot off.

What are Simon’s main weaknesses?

Wingers need to be good going forward but, nowadays, there is an additional onus on them helping out defensively. No longer is it good enough to contribute when in possession only.

This is one area where Simon needs to improve. He isn’t the best defensively and sometimes his presence at the back feels artificial. At 22, he is still young though and that is definitely something that can be coached into his game.

There have also been questions over his stamina in the past, and moving to a fast and frenetic league like the Premier League will leave him with no choice but to improve that aspect of his game. Otherwise he will simply be left behind. 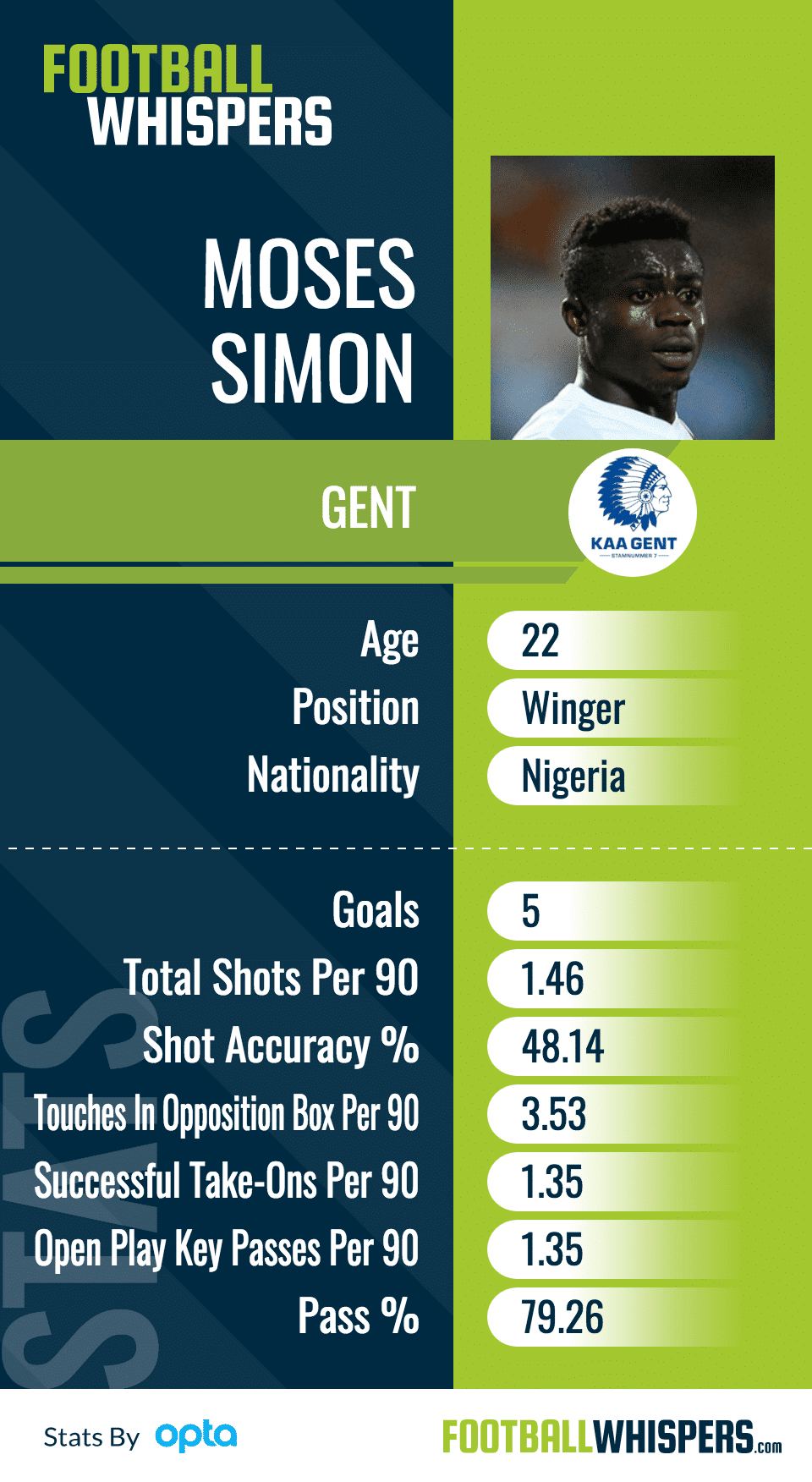 How much is Simon worth?

The 22-year-old is under contract until the summer of 2019 and if Gent want to cash in, it will be this summer.

Reports suggest they would accept £13million for their star man. That may have been a lot for a player unproven in Europe’s top leagues in the past, but nowadays it isn’t expensive at all.

If he ends up having a good World Cup, his price will shoot up. So it is likely any move for him would be concluded before the tournament gets underway in Russia.

Whoever does sign him will be wary of giving him time to adapt though.

But Simon's form should earn him a chance in the Premier League and with Brighton looking for someone for the left wing, Simon fits the bill.