Glenn Murray was the last resort for Graham Potter; the complete antithesis to the approach the new Brighton & Hove Albion boss has tried to preach.

But despite dramatically overhauling the style of play at the Amex Stadium – to the point only Manchester City, Liverpool, Chelsea and Leicester City attempt more passes per match – Potter has had to break open the box labelled ‘In case of emergency'.

Albion's top scorer in each of the last three seasons, twice hitting double figures since promotion and being tentatively touted for an England call-up, Murray didn't score his first Premier League goal of the season until the dramatic 3-3 draw with West Ham United on February 1.

Now 36, the Seagulls' No.17 has been used sparingly. Indeed, before this weekend his Premier League record read four starts, 12 substitute appearances and one goal. It is the starkest reminder that the times, they are a-changing down on the South Coast.

Handing Murray his first Premier League start since September 14 was an admission that perhaps the old ways still hold some value too. Synonymous with Chris Hughton's more direct Brighton side, Murray's muck-and-nettles approach is at odds with what Potter is trying to achieve at the Amex Stadium.

Hughton was removed from his post, despite securing a third season of Premier League football and an FA Cup semi-final, to make way for the bold new future. From 69.03 long passes (per 90) last term, the division's third-highest, Albion now average 59.46. The number of passes they attempt has risen from by almost 150 to 371.29.

That's proof that what the former Östersund boss is trying to do has worked.

But results haven't necessarily followed. A 3-0 opening-day win over a listless Watford side immediately validated Potter's reign and justified the decision to remove the highly respected and popular Hughton from his position. But, with 12 games remaining, Brighton are 16th, two places and three points above the drop.

At this stage last season they were 14th with 27 points and were, you guessed it, three points clear of the relegation zone.

There is a bigger picture to all this. Brighton are well and truly invested in Potter and a more exciting, attacking style of play. So much so, they put a six-year contract in front of the 44-year-old at the end of November.

That sent a firm and very clear message: being in the Premier League is not the be-all and end-all. Having a clear identity with an emphasis on younger players and good football are the foundations from which everything else is built. 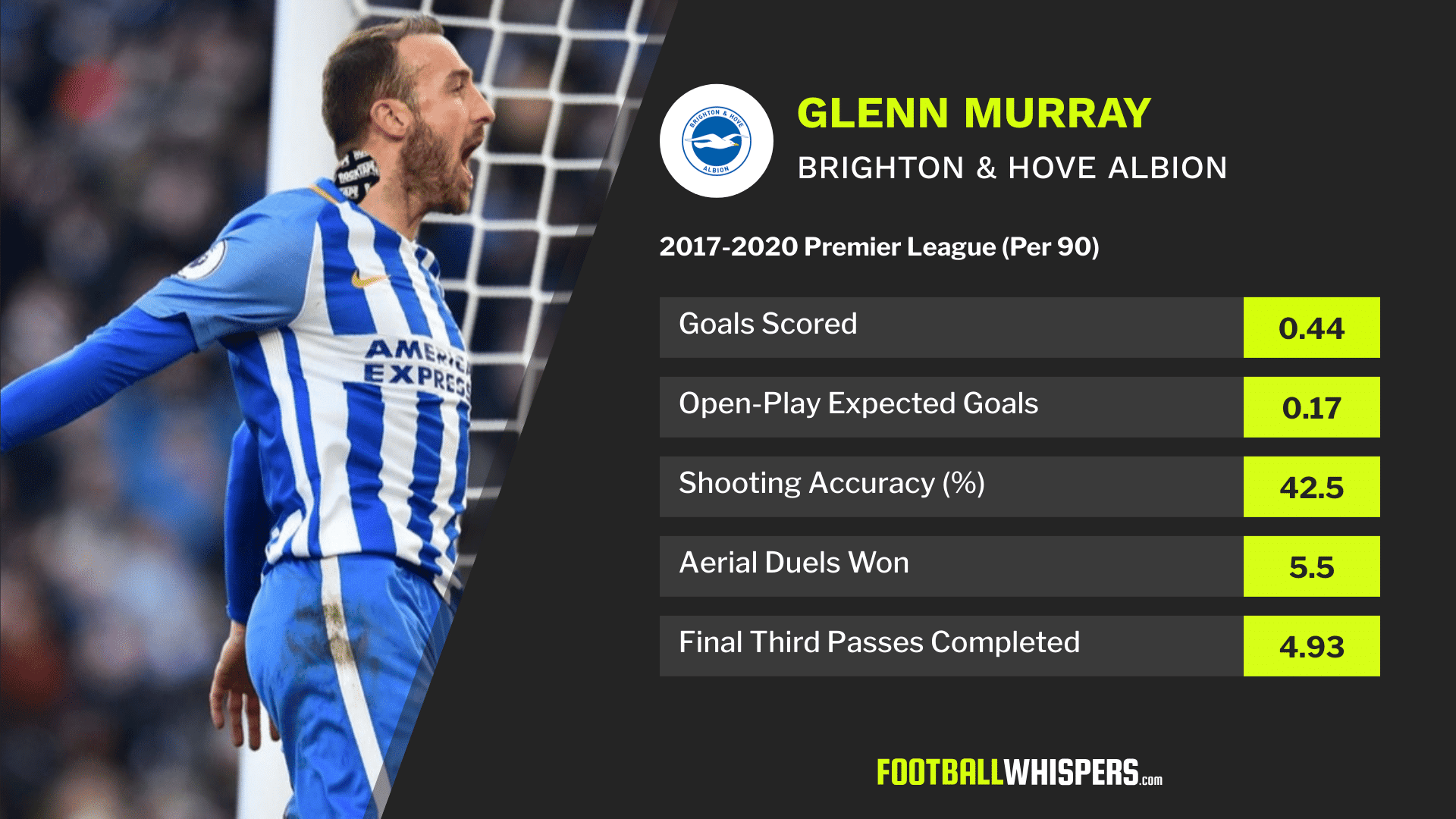 “We've been really pleased with the start Graham has made as head coach since joining us in the summer,” chairman Tony Bloom said when Potter's extension was announced.

“I'm delighted he and his staff have committed to these new long-term contracts.

“Together with his backroom team, he has continued the club's progress of recent years and brought a different approach with a new style of play, which has been embraced by players and supporters alike.”

Potter is not the only one who has inked a new agreement with Brighton. Following his display at the London Stadium, the Seagulls announced their totemic frontman had signed a contract which will keep him in Sussex until the end of the 2020/21 season.

That could be equally significant. While Murray shouldn't expect the number of minutes he is afforded to dramatically increase, Potter has clearly seen value in having the former Crystal Palace and Bournemouth forward around. There is a recognition that while £16million summer signing Neal Maupay and youngster Aaron Connolly offer more mobile, pacier options upfront, Murray still brings something to the party.

That is bold of Potter and should be applauded. Given his remit was to get away from direct football and winning second balls by going long, his faith in Murray indicates a willingness to adapt and shows he is receptive to other ideas.

Maupay has handled the step-up to the Premier League well since trading Brentford for Brighton in the summer, scoring seven times in 20 starts. But having failed to register since December 16, the French forward has been taken out the firing line.

Since Brighton reached the Premier League in 2017/18, Murray is fifth among Premier League strikers for aerial duels won (325). He brings another dimension to the Seagulls' attack and as games become tight, nervy affairs, Murray's nous could come in handy.

Brighton face rivals Crystal Palace in their first fixture after the winter break and have Norwich City, Southampton, Newcastle United and Burnley to play before the season is over. Those are games Albion simply have to make the most of in order to avoid relegation. Not least because they've still got Wolverhampton Wanderers, Leicester City, Manchester United, Liverpool and Manchester City to come.

If Potter and Brighton get through this first season of change unscathed, the experiment will be deemed a success and the experience will have served to benefit all parties.