People are quick to label players these days. With the inflated transfer market and the goal-scoring exploits of some of the world’s best, terms like bargain and flop are thrown around liberally. Having said that, Brighton and Hove Albion’s Pascal Groß is the very definition of a bargain after his performances this season.

He arrived in the summer for a fee of just £3million from FC Ingolstadt. Some players receive more than that as a signing-on fee when they join a new club. For their outlay, Brighton have benefitted from 13 goal involvements in 2,252 minutes of Premier League action. He's involved in a goal every 173 minutes.

His assist against Arsenal, a deliciously curled cross from the right which Glenn Murray was able to guide home, was his eighth of the campaign and his third in his last four starts for the Seagulls. Only Kevin de Bruyne (14), Leroy Sané (11) Paul Pogba (9) and David Silva (9) have more assists than the Mannheim-born midfielder.

Sergio Agüero (5) have combined to score more goals than the Brighton duo who have four to their name.

Groß has assisted 36 per cent of Murray's goals. They've struck up quite the partnership. But Murray isn't the only player to benefit from the 26-year-old's arrival in Sussex.

His early season form of three goals and five assists in his first 12 matches helped Hughton guide Brighton to a mid-table position. They looked comfortable there and more than deserved it. However, in his next 15 starts he scored just twice and failed to register an assist.

In those 15 matches, the Seagulls picked up just 12 points and were no longer soaring above the relegation scrap. Instead they were part of it and went from picking up 1.25 points per game to managing just 0.8.

It might not seem like much but over the course of a season that's a difference of 17 points.

There are a lot of factors to consider when looking at the drop-off in form, especially Groß's. The German, having played in the Bundesliga, was used to a winter break. Here in England, they don't exist. His performances may have tailed off due to fatigue or burnout.

Furthermore, a number of his team-mates are also playing in the Premier League for the first time. A season of inconsistency was to be expected. It just so happened that a number of Albion players were out of sorts at the same time.

However, despite his apparent drop-off in form, he was still posting impressive underlying stats. Using Understat, you see can see his xA90 (expected goals assisted) is still in the top 15 in the Premier League. 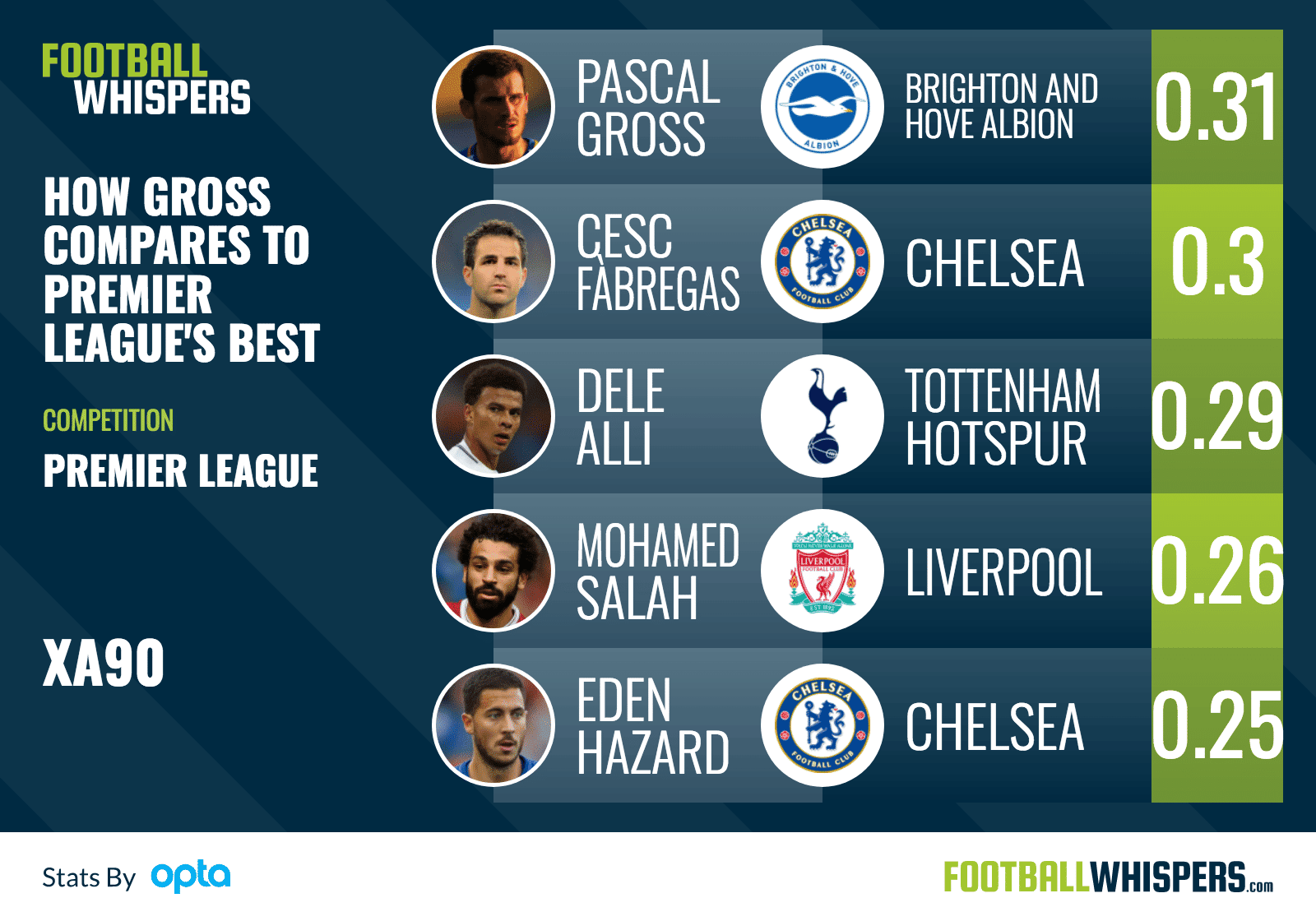 The high-quality chances he kept creating just weren't being finished off and that's through no fault of his own. However, he's still outperforming his xA tally for the season.

Pulling the strings for Brighton once again

Brighton's recent run of good form has seen them move seven points clear of the relegation zone. They're undefeated in seven matches in all competitions, five of which came in the Premier League. In fact, Hughton's men have lost just twice since the turn of the year.

During this run they've posted their highest xG scores of the season. Against Bournemouth, a 2-2 draw, Brighton's xG was 2.37. At no time before then had they been north of 1.9. In the recent 4-1 victory over Swansea City they posted an xG score of 3.29, a total Manchester City would be proud of.

After emphatic victory over Carlos Carvalhal's men, a lot of plaudits went the way of José Izquierdo and Murray. The former has put in a number of eye-catching performances since his return to the starting XI and terrorised the Swans.

He had the beating of Kyle Naughton throughout. Though they knew exactly what he was doing to do; drive past the right-back, hit the byline and pull it back into the centre, they couldn't stop him. He bagged an assist in the game but it could, and probably should, have been three.

But the Colombian winger benefitted from Groß's intelligence. You see in the image above how the Brighton No.13 allows the ball to run across him before he threads it back into the path of his team-mate. Many in this scenario take a touch and it slows the attack down. The fact the playmaker doesn't means Izquierdo doesn't have to check his run.

It looks effortless because it is for someone of Groß's ability. But it makes such a difference and was overlooked by the media in the aftermath of the result.

In the picture above you see Groß in possession and there's a simple pass on to Izquierdo down the left. When one-on-one there's not many who can stop the Brighton winger. His trickery and pace means he's a nightmare and difficult to anticipate his next move.

That pass is on but the Swansea players are clearly expecting it. They've got men coming over to cover and have numbers to make it difficult for Izquierdo to pick out a pass. So Groß, brilliantly, switches things up.

Instead of playing the pass to his left he slides a delicate ball with his weaker foot straight through the cluster of Swansea players and into the path of Anthony Knockaert. The Frenchman has a free run into the penalty area with the ball and expertly pokes past Łukasz Fabiański. Swansea weren't expecting it and with one pass he's taken a good four players out of the game, and Brighton have put the match to bed.

Groß produced two moments of brilliance against Swansea and Brighton scored two goals off the back of them. That's how influential he is to their system and the way they play.

The cross he put in for Murray against Arsenal was so perfect it was like he was floating a ball to a team-mate in open space under next to no pressure. He's a game changer and a match winner. For those reasons he very much deserves the title of ‘bargain of the season'.