This post features a comprehensive preview of the Ligue 1 fixture, Brest vs Lens. The match is scheduled for Sunday 21st November 2021. Both teams won their last matches before the international break. Find out how we are tipping these teams to perform when Ligue resumes this weekend.

Brest hosts Lens in a fixture that could further condemn the hosts to an early battle against relegation or see them secure safety points. Here are our best three predictions for this game:

We are backing both teams to find the target in this fixture. While Brest is a struggling outfit coming to this game, the hosts have had a strong resurgence and are now unbeaten in four games. The hosts have scored at least a goal in all the 13 Ligue 1 games played so far. They come to this match with back to back victory (home and away). We think the hosts will fight to score in this game and even though Lens will look to retain their second spot on the table, home advantage and the fact that Brest hasn’t lost at home in the last three games when playing against Lens should play significance in this game.

Brest will fight for points in this game. The hosts have not lost to Lens in the last three home encounters. Bagging 2W and 2D in the last four matches is another sign that going unbeaten in five games should be the main objective for the hosts. It is especially a possible outcome against Lens, a team that has lost the last two away games.

Brest to open the scoring

Winning this game can only be possible through scoring the first goal. Lens has struggled in the last two away matches and this fixture against resurgent Brest could prove difficult. Also, looking at the last five matches, Brest has done well defensively.

For the best match odds as well as the latest stats for Brest vs Lens, see the tables below.

Game Preview: Lens in Tight Spot in Fight to Retain the Second Spot

Lens formidable run in the new seasons faces another test on litmus paper. The visitors are second on the table but depending on how Ligue 1 teams perform this week; the tables could turn against the visitors at Brest. The hosts need a win or risk drifting to the fifth spot. It is a tight race for the Champions League and any mishap could be costly in the long run. Playing against Brest, a team that is currently having a strong resurgence despite being above the relegation zone on goal difference makes this game even trickier. However, because five out of the last six meetings between these teams ended with goals on both ends, this game could go either way. For after losing the last two away matches, Lens will likely struggle against the hosts who haven’t lost in four consecutive games. 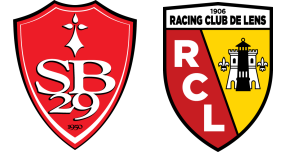 What is the kick-off time for Brest vs Lens?

Where is the game venue?