Brentford beat Chelsea last time out and have had a full week to prepare for their Premier League clash with West Ham on Sunday. The Hammers were in action on Thursday in the Europa League and their players are bound to feel some tired legs as the game against Brentford progresses.

Brentford secured a 2-1 win at West Ham back in October and we're backing the home side to secure the domestic double over the Hammers this weekend. West Ham have lost their last four away games in all competitions and even their performances in their last two homes games have been sub-par. Brentford have won three of their last four league games and appear to have hit form at just the right time in the season.

Brentford put in their best performance of the season last weekend when they made the trip to Stamford Bridge. Despite going a goal down early in the second half, Brentford bounced back with a vengeance, equalising through Janelt 2-minutes after going a goal down. Just 4-minutes later, Eriksen put the visitors 2-1 in front, and on the hour mark, Janelt scored his second of the game. Chelsea tried to get back into the game but Brentford were just too good, securing all 3pts 3-minutes from time via a fourth goal from Wissa.

West Ham would have been expecting a tricky home game against French side Lyon but they made it harder for themselves when Cresswell was shown a straight red card in first-half stoppage time with the game poised at 0-0. Despite that setback, West Ham did take the lead in the 52-minute via Bowen but the hosts couldn't hold on to their advantage and saw Tottenham loanee Ndombele equalise in the 66th-minute and the game ended in a draw.

Brentford: Joshua Dasilva and Julian Jeanvier are the main injury concerns for the hosts this weekend.

West Ham: Manuel Lanzini and Angelo Ogbonna both look set to miss the trip to Brentford due to injury. 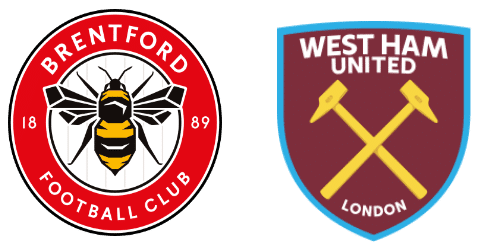