Leicester will move ahead of Brentford in the Premier League table if they can find a way to beat the Bees in their own backyard on Sunday. Just a point separates the two clubs and while the Foxes are away from home, the hosts haven't won any of their last three league games at the Brentford Community Stadium.

Our Top Tips for Brentford vs Leicester

Here are our predictions for Brentford vs Leicester.

Most of the regular Premier League teams don't have much of a recent history with Brentford but Leicester have faced the Bees in each of the last two seasons of the FA Cup and won on both occasions. Leicester were the away side in both ties, winning 1-0 in 2020 and 3-1 in 2021 and we're backing the Foxes with a double chance bet this weekend. Brentford haven't won any of their last three home games in the Premier League, while Leicester head into this game on the back of a memorable 4-2 win over Man Utd.

We're expecting goals in this game as both of these sides like to play on the front foot. At least three goals have been scored in three of Brentford's last four outings in all competitions, while over 2.5 goals have been produced in four of Leicester's last five fixtures. Leicester claimed a 3-1 win against Brentford back in January and haven't kept a clean sheet in any of their last five matches.

Can Brentford get back to winning ways at home to Leicester?

Brentford failed to win for the third straight match at home last weekend when they took on the Premier League leaders Chelsea. The Bees gave a very good account of themselves but ended up losing the game to a solitary strike from Chelsea's left-back Ben Chilwell. Despite that result and their disappointing form at home, Brentford sit comfortably in mid-table and have really impressed in their debut season in the Premier League.

Leicester were busy in midweek as they made the trip to Russia to face Spartak Moscow where 4-goals from Foxes' striker Daka sealed a 4-3 victory for the Premier League side. Last weekend, Leicester welcomed Man Utd to the King Power Stadium and managed to secure an impressive 4-2 win. Goals from Tielemans, Soyuncu, Vardy and Daka helped the Foxes on their way to a well-deserved home win over a Man Utd side that are supposed to be title-challengers this season.

Brentford: Yoane Wissa, Vitaly Janelt, Mads Sorensen, Joshua Dasilva and Shandon Baptiste are all injury concerns for the home side this weekend.

Leicester: Wesley Fofana, James Justin and Wilfred Ndidi have been ruled out of Sunday's match through injury, while Ayoze Perez, Timothy Castagne and Youri Tielemans are slight doubts. 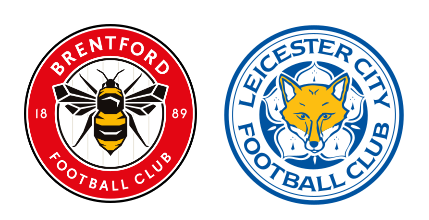