The battle for a spot in the Top 6 in the English Championship is on. Today, we will go over the Brentford vs Cardiff free tips, odds, predictions, and match preview. You can also check out our other Championship betting tips on our site.

Here are the top free betting tips that our experts came up with for the upcoming Brentford vs Cardiff match.

Our recommended bookmaker for this match is Ladbrokes. Keep in mind that odds change constantly, so the prices you see above may not be the same by the time you open the page to place a bet.

Check out the recent match histories and other statistical data in the tables below, so you may see for yourself where parts of our predictions are coming from.

Brentford vs Cardiff: Who Will Win on Tuesday?

50% of the ten most recent matches for both clubs ended in a draw, but we believe that this time, like the last time both teams faced each other in December – Brentford would win. They have three key players out with injuries, including defenders Henrik Dalsgaard & Rico Henry and midfielder Joshua Desilva.

For Cardiff, the injury news is a little harsher because they will be missing four defenders, two of which (Joseph Bennett and Sean Morrison) played in many Championship games this season. Cardiff will also be missing two forwards – Lee Tomlin and Isaac Vassell, which will damage their attack in addition to a weaker defense. 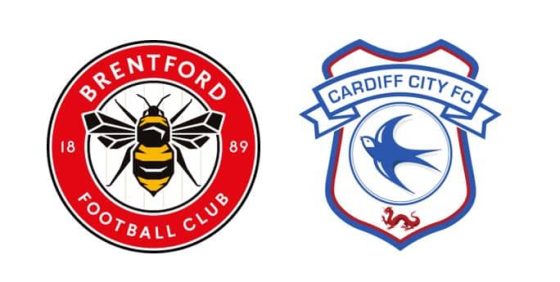