Jamie Vardy is on one again.

The striker's brace in Leicester City's 4-1 win over Aston Villa took his goal tally to 16 for the season. He’s now just two shy of his total from the 2018/19 campaign and just eight off what he managed when the Foxes stunned the world to win the Premier League title in 2016. And we’re only 16 matches into the top-flight season.

Vardy has scored in Leicester's last eight Premier League matches and is only three games away from equalling his own record of netting in 11 consecutive league games. You wouldn’t bet against him reaching that, although game eleven would be away at Manchester City.

In terms of goals in 2019, Vardy is peerless. He’s netted 26 so far and there are five matches left to play in the calendar year.

The former England international has been in fine form since Brendan Rodgers was appointed at the end of February. Since his arrival, the former Fleetwood Town forward has netted 23 times and it appears as though the one-time Liverpool boss has found a way to get the best out of his No.9.

Rodgers has struck gold with strikers in the past. When in charge of Swansea, he turned Danny Graham into a 12-goal-a-season Premier League forward. For Liverpool, the 46-year-old was the one to get Daniel Sturridge and Luis Suárez firing. While with Celtic, he aided the development of Moussa Dembélé and Odsonne Édouard.

The Leicester boss divides opinion but one thing many can agree on is he unlocks handling of forwards. He builds his side around what these goalscorers are best at and it is why Vardy is once again thriving.

Perhaps the obvious thing to do would be to play long balls over the top to fully maximise Vardy’s pace. While that happens on occasion, his second against Villa was right out of the Vardy playbook, Rodgers has refined this approach.

Leicester still look to get the ball forward as quickly as possible but they’re no longer relying on the 32-year-old to do as much running.

The Foxes are more dominant on the ball. For example, from the start of the 2017/18 campaign to the arrival of Rodgers, Leicester attempted, on average, 413 passes. Since then, this has risen to 523 per 90.

As expected, touches in the box have risen, too. Under Rodgers, Leicester are seeing more of the ball in dangerous areas which in turn allows them to create better opportunities on a regular basis. 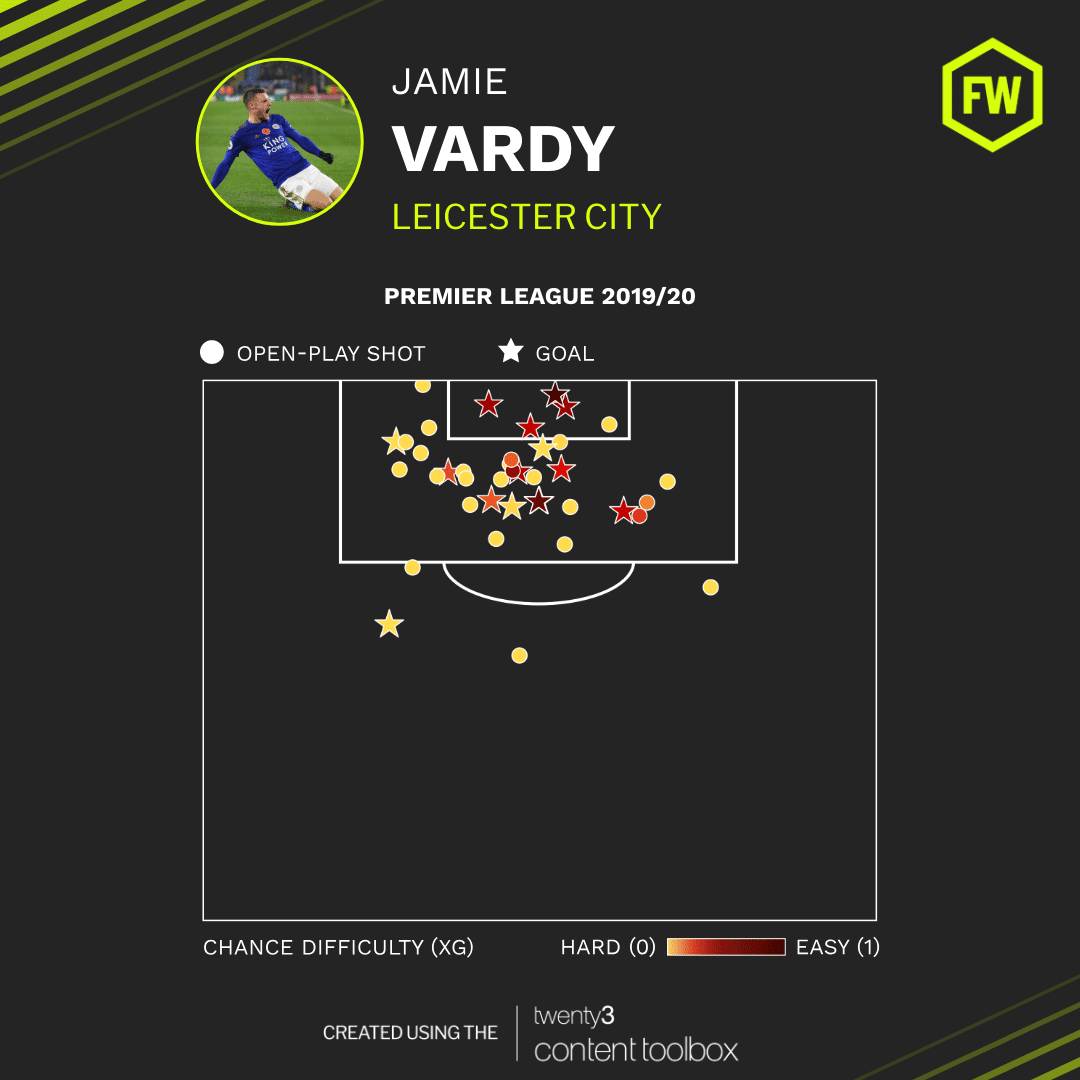 In previous years, it was a scattergun approach. They attempted to get the ball forward as quickly as possible and then hoped for the best in a certain respect. But now Leicester can sustain attacks and then control the space if there’s a turnover in possession – it explains why they’re so good defensively.

The key point here is Vardy is getting better service on a consistent basis. Rodgers is looking to make the most of his No.9’s clinical finishing and is doing so by structuring the patterns of play to allow him to end moves with very little involvement elsewhere.

When looking at Vardy’s stats over the same period, you see his touches in the opposition’s box have risen by almost two per 90 since Rodgers’ appointment. It might not seem like much and he’s only averaging 0.55 more shots. Yet he’s almost doubled his goal average and his expected goals average has tripled.

And despite Leicester averaging 100 passes more a game, Vardy’s playing fewer now than he did at any stage of the 18-month period prior to Rodgers' appointment.

The Premier League’s top scorer is being used as an exclamation point and teams are struggling to stop it. Given he's not relying on his pace as much, this is something he could do for the next couple of years.