Leicester City’s players have not taken long to respond to Brendan Rodgers’ ideas. In the dominant 3-0 win over Arsenal, the Foxes were fluid and energetic, pressing with intensity and passing with purpose. By the end, they could have won by more.

What was most impressive about the victory, though, was the manner in which Leicester controlled the game. They had 68 per cent of the ball and an expected goals tally more than five times that of Arsenal’s (3.4 to the visitors’ 0.6).

This was not a typical backs to the wall win for a mid-table team against an established top six side. Arsenal, though they played the entirety of the second half with ten men, were comprehensively outplayed, passed into submission, unable to lay a finger on their opposition with or without the ball.

Leicester swept aside one of the Premier League’s best teams, and that should excite Foxes fans. It should be remembered that Rodgers has not yet been at the club for two months. He took over a team that had lost six in eight games, culminating in Claude Puel’s dismissal after a 4-1 defeat against Crystal Palace.

The significant improvement under Rodgers, then, is impressive. Leicester have won five of their last seven, scoring 16 goals and conceding six in the process. And there have been subtle changes, tactical tweaks, that have made all the difference.

The emphasis, as always with Rodgers, is on possession, quick transitions and aggressive pressing. All of that was in evidence at the King Power Stadium on Sunday. Pleasingly from a Leicester perspective, too, there were no real signs of the defensive vulnerabilities that have often plagued Rodgers’ teams.

Since Rodgers’ arrival, Leicester’s average possession per game has increased from 52 per cent to 57 per cent. They have created an average of 2.37 big chances per 90 minutes, compared with 1.61 previously. And they have completed significantly more passes: 440.5 per 90, up from 358.13 per 90.

Rodgers, then, has already made his mark on a team that appeared to lack an identity under Puel. The Frenchman’s approach was more contemplative, based on possession but without the thrust, the urgency Leicester have shown under Rodgers was absent.

When the Foxes won the Premier League title in 2015/16, they did so playing a minimalistic, counter-attacking style of football. Claudio Ranieri was not interested in possession. Instead, he set up his team to utilise the pace and directness of Jamie Vardy and Riyad Mahrez on the break. That continued under Craig Shakespeare, until Puel attempted to switch to a more measured approach.

Now, Leicester have almost completed their transformation, as the Football Whispers persona radar below highlights.

Crucially, though, they have the players to do it. On Sunday, midfielders Wilfred Ndidi and Hamza Choudhury completed more passes than anyone on the pitch – 92 and 98 respectively – while Youri Tielemans and James Maddison, given license to roam, proved a constant threat, linking up brilliantly for Leicester’s second goal.

Vardy, too, is thriving under Rodgers. The striker admitted to being frustrated in the final weeks of Puel's reign but the transition to a more attacking style means more chances for the Foxes’ top scorer, who now has 18 Premier League goals to his name after his brace against Arsenal.

The signs are overwhelmingly positive for Leicester ahead of next season, by which time Rodgers will have added to his squad and had more time to further establish his ideas.

“I’m not thinking about it so much, though – just about working and seeing players improve and try to create a strong base for the summer and the start of next season.” 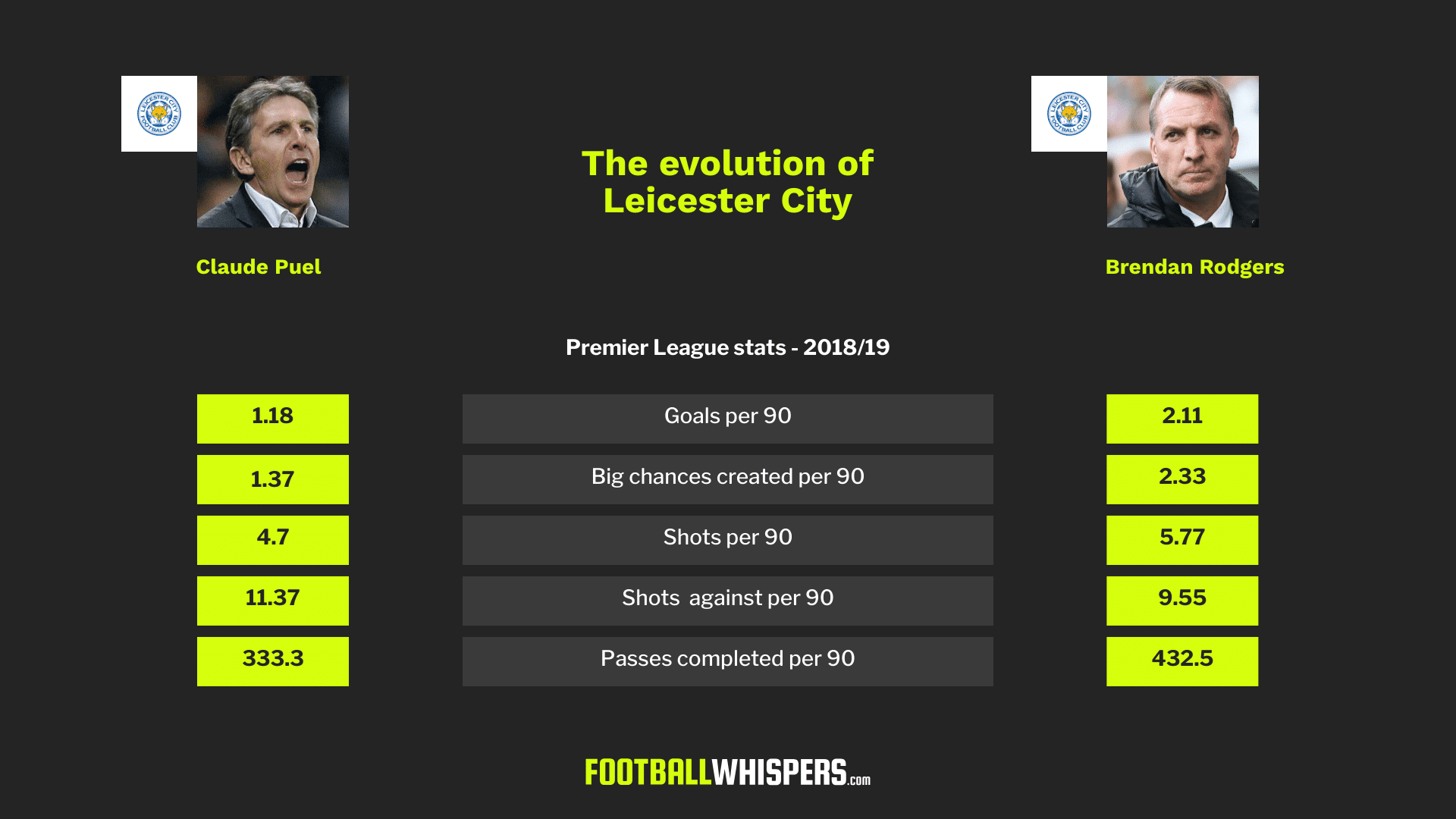 Based on recent results, Rodgers does not appear to be overly ambitious. Leicester have the foundations of a strong team: Harry Maguire, Ben Chilwell, Maddison, Choudhury, Ndidi.

These are all relatively young players – the average age of Leicester’s squad is just 25.8 – with the potential to take the club to the next level. If they can keep hold of Tielemans, too, the top six might not be too far away.

The future is bright for Leicester, who have quickly taken to Rodgers and his principles. Expect them to challenge at the right end of the table next season.