As Brendan Rodgers will soon find out, cleaning up on the domestic front is the bare minimum when you are Celtic manager. Even more so when your biggest rivals have only returned to the same division as you and are on their knees.

But, as Ronny Deila knows only too well, winning alone isn’t enough. With a wage bill which dwarfs the rest of the division and players of a far greater calibre than their rivals, a degree of style and swagger is needed.

When the Bhoys persuaded former Liverpool boss Brendan Rodgers to move north of the border they made their intentions very clear. Winning the title by 15 points in a division with no real rivals was an underachievement; Rodgers, who came so close to lifting the Premier League with the Reds in 2013/14, would have to raise the bar.

And he has done just that.

If unbeaten Celtic win Sunday’s clash at fifth-placed Hearts a sixth consecutive Scottish Premiership title – and 48th in total – will be heading to Celtic Park. A step closer to banishing all memory of the nine in a row last achieved by Rangers in the 1990s – though first done by Celtic between 1967 and 1974.

The earliest any team has won the Scottish top flight was in 2013/14 when Celtic secured the title on March 26. Neil Lennon’s side were crowned champions with seven games to spare. In doing so they beat a Rangers’ record which had stood since 1929. But Lennon left at the end of the campaign to be replaced by Deila.

On Sunday the current crop of Celtic stars can go one better by securing the title with eight games to go. 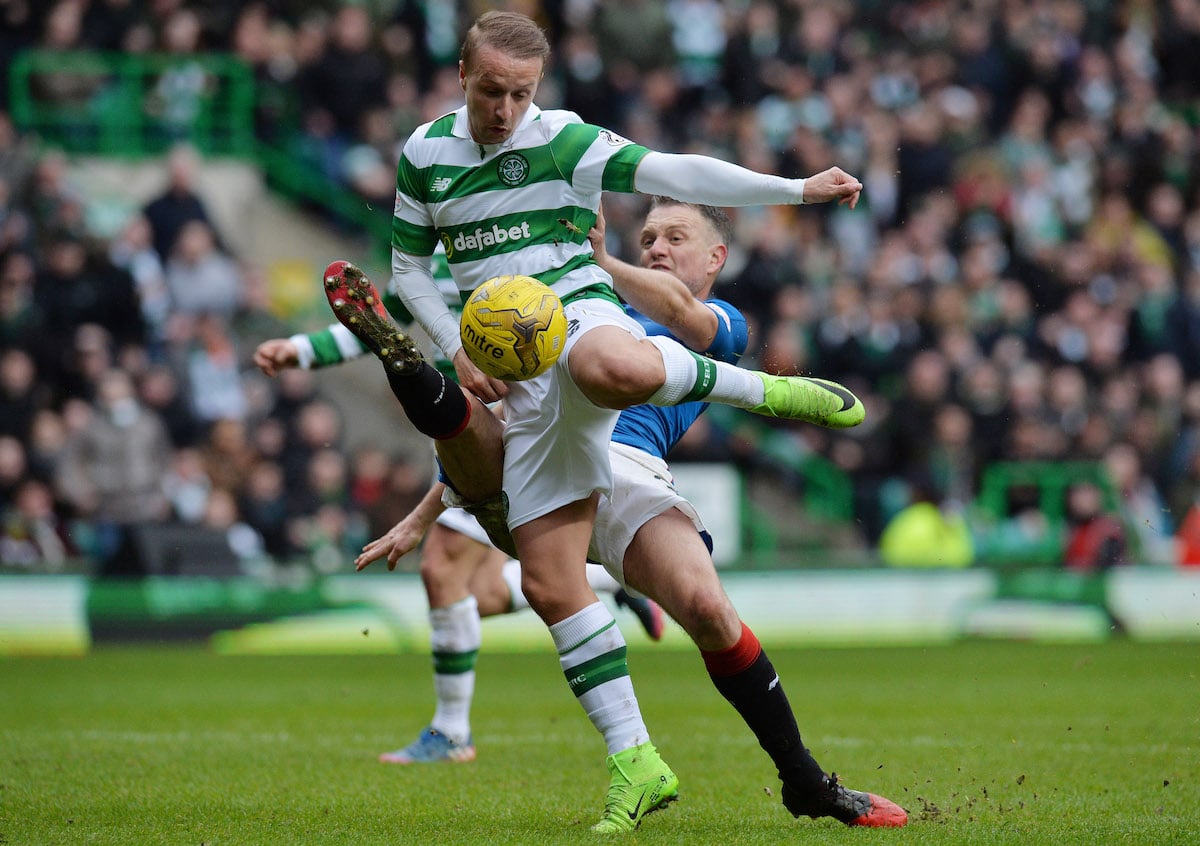 Sharing the goals around

Last season Leigh Griffiths finished as Celtic’s top scorer by some distance, bagging a staggering 31 from just 32 Premiership starts. However, the concern was that the Bhoys’ next highest scorer was midfielder Tom Rogic with just eight league goals. No-one else had even reached double figures.

This season that could not be further from the case. Top scorer Moussa Dembélé has, of course, been a sensation. Signed for a bargain £500,000 from Fulham, the French forward has 17 goals in just 19 league starts – and 32 from 35 in all competitions.

Just behind the Tottenham Hotspur transfer target is another of Rodgers’ recruits: Scott Sinclair. The winger, who worked under Rodgers at Swansea City during what had previously been the best period of his career, has 15 from 23 starts.

The third player to hit double figures in the league is midfielder Stuart Armstrong. Signed from Dundee United in 2015 the midfielder has enjoyed the best season of his career, notching 11 times from midfield in just 18 league starts.

And Griffiths? A not-too-shabby eight in a mere 10 Premiership starts. The former Wolverhampton Wanderers forward suffered a calf injury in October and has found himself behind the much-vaunted Dembélé since returning. 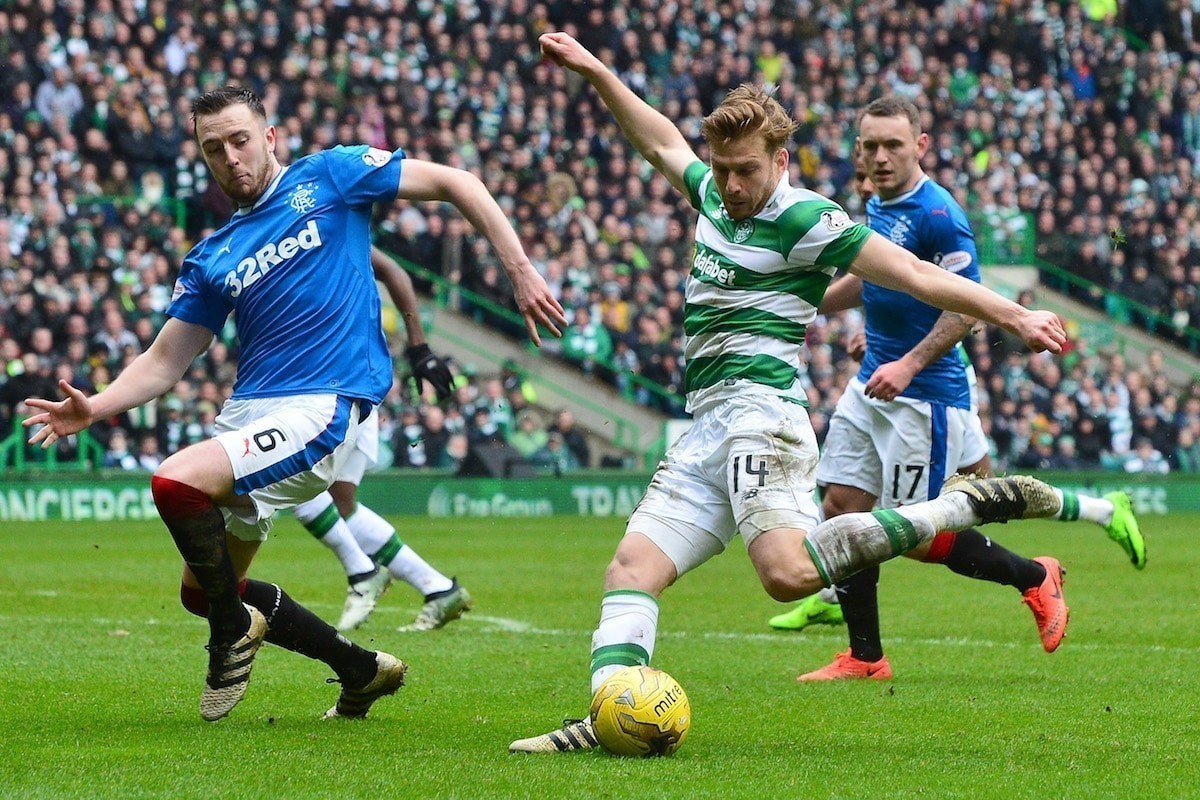 Getting the best from Stuart Armstrong

Like any superpower in their domestic league, Celtic have made a habit of picking up the best of the rest. When Armstrong and Gary Mackay-Steven were snapped up from Dundee United during the 2015 winter transfer window it was another example of the division’s big boys raiding a smaller club for their top talents.

Armstrong made a passable start to his Celtic career, finishing his maiden season with one goal – on his debut – from 15 league outings. He followed that up with four in 25 last term with Deila often using him on the left flank instead of his preferred position.

However, this season he established himself as a regular starter for Rodgers and flourished under the tutelage of the Ulsterman with 13 goals in all competitions – by far the best return of a career in which he’d never hit double figures before.

Armstrong has displayed is an almost Frank Lampard-esque knack to time his run and then ghost between defenders who are not on the same wavelength as him. His timing, intelligence and finishing have set him apart.

In the example below, against Partick Thistle, Armstrong (circled in yellow) is not really involved in the move to begin with as Celtic skipper Scott Brown looks for an option. 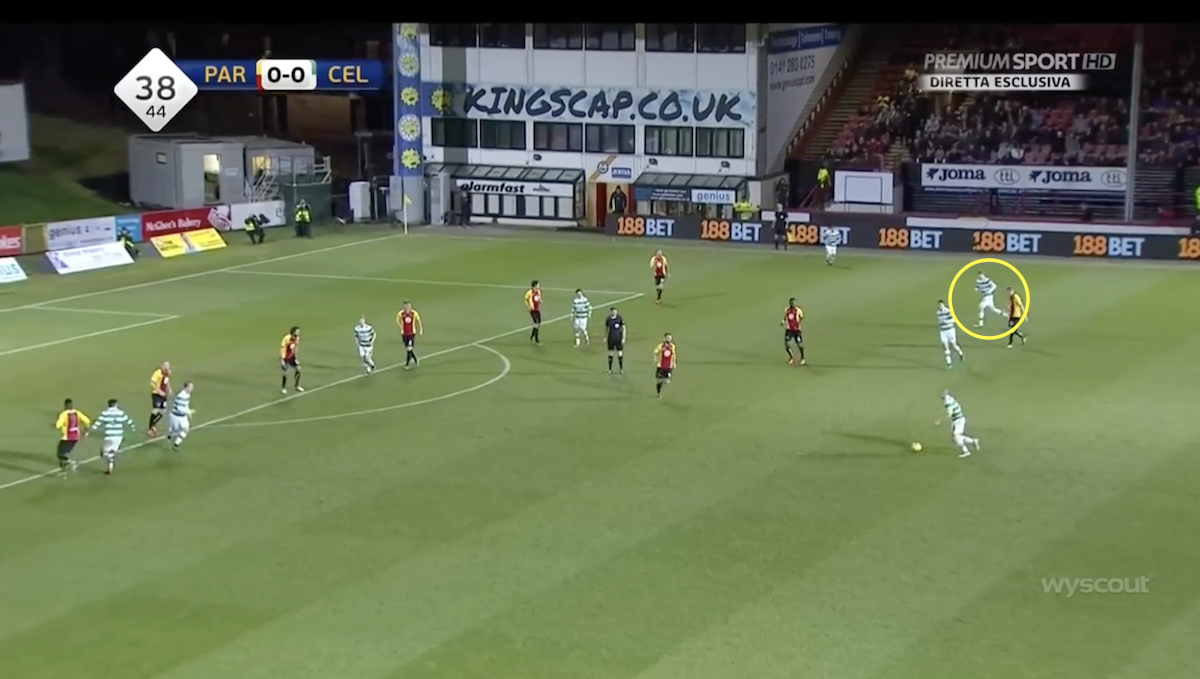 Seeing that Griffiths (circled in red) will be able to get a cross in from the left, Armstrong speeds up and darts to the back post. 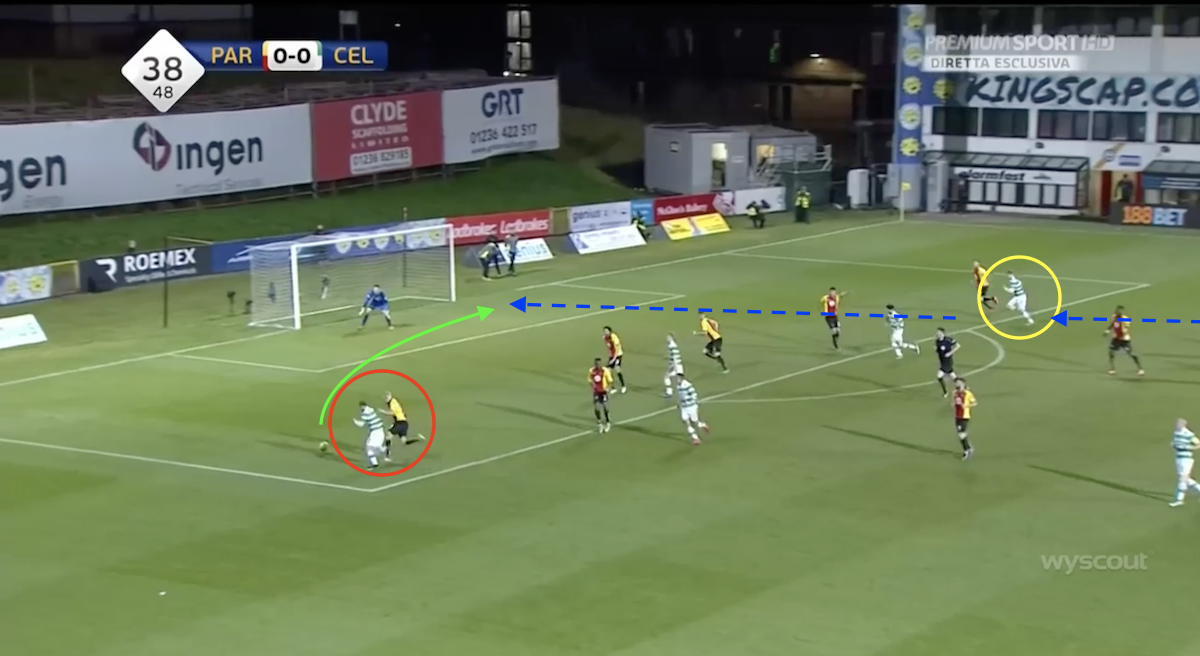 Griffiths, now out of shot, duly delivers the cross and Armstrong (circled in yellow) meets the low delivery to score. 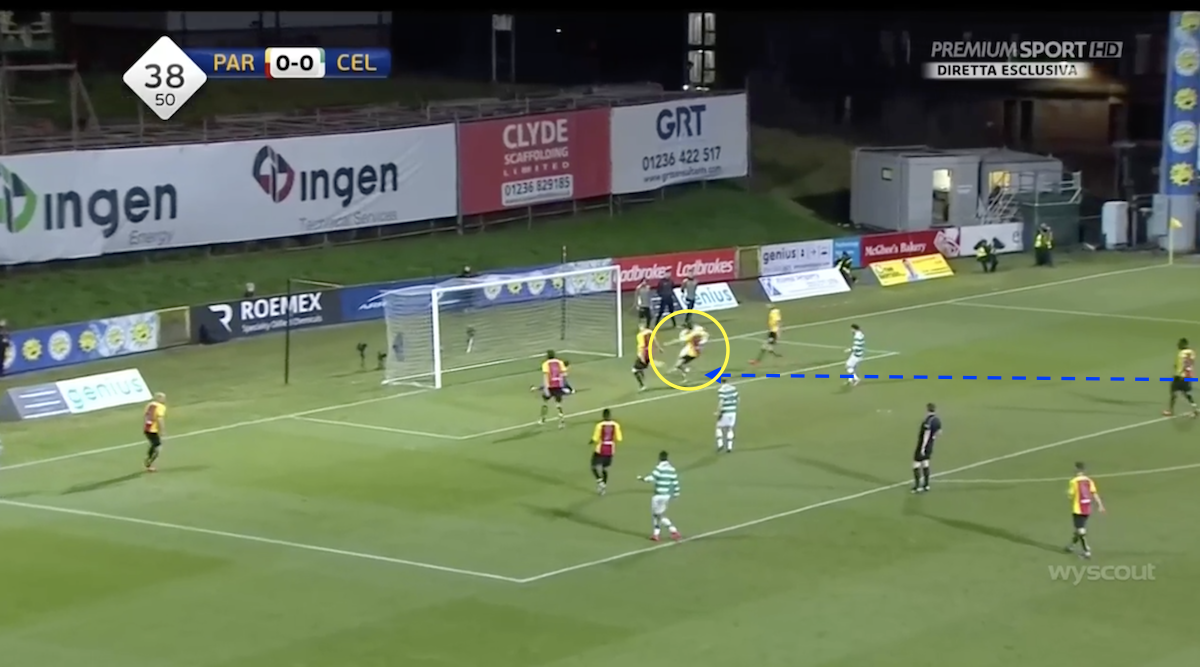 READ MORE: 10 PLAYERS SCOTLAND MUST BUILD THEIR FUTURE AROUND

His form has been recognised by Scotland coach Gordon Strachan who recalled him after a two-year wait for a World Cup qualifier against Slovenia in March. Armstrong was handed his long-awaited debut and responded with a performance described by Strachan as: “The best Scotland debut I have ever seen.”

Recruiting the tried and tested

Rodgers' one big summer purchase was Sinclair. Signed from relegated Aston Villa for £3.5million – significantly more than any of the club's other summer acquisitions – a few eyebrows might have been raised by the arrival of a player who had struggled for several seasons to replicate the form he showed for Swansea City.

It was under Rodgers that Sinclair flourished. He scored 28 times in just 74 league starts for the Swans, numbers which caught the eye of Manchester City. However, a £6.2million switch did not work out. He was afforded just two league starts in three years before loans to West Bromwich Albion and Aston Villa.

But Rodgers knew exactly what he was getting. A pacy, direct, tricky and, on his day, devastating wideman who could cut inside, cross, shoot and score goals. And Sinclair has repaid that faith to a man who clearly knows how to get the best out of him.

Operating on the left of the three players deployed at the top of Rodgers' 4-3-3 system, Sinclair has licence to cut inside and drive at defenders, utilising his pace.

In the example below, against St Mirren, Sinclair receives the ball on the counterattack on the left-hand side. With no options around him, his focus is on getting into the box as quickly as possible and working a shooting angle. 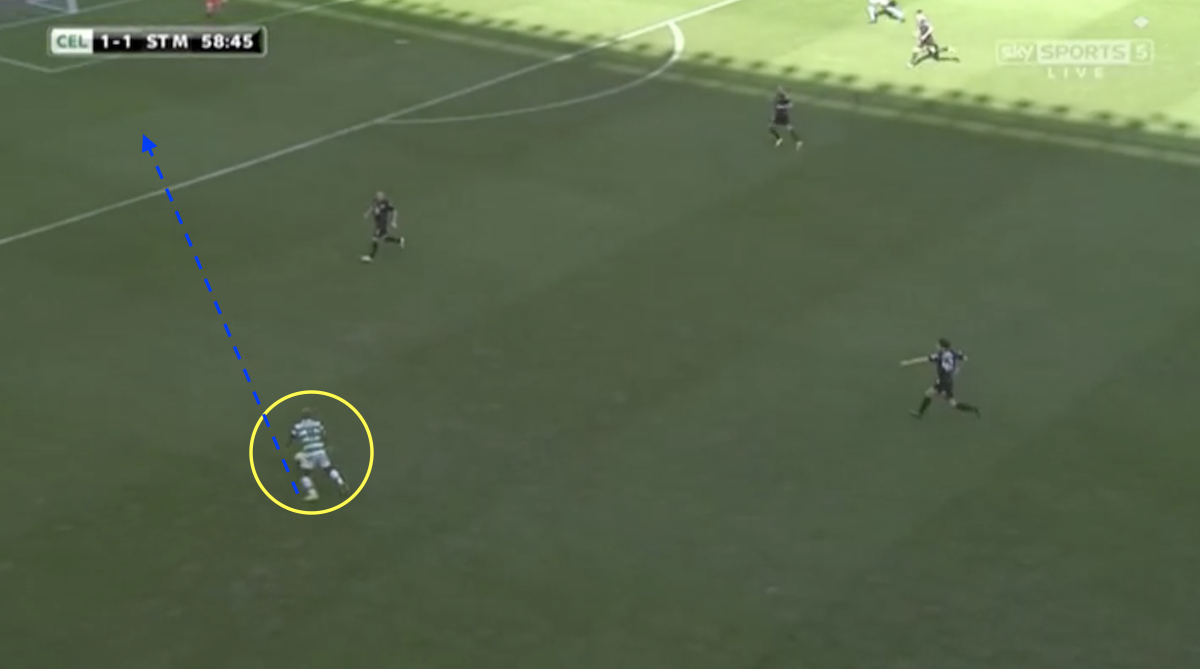 He does that and, using the defender's body as a shield, curls beyond the St Mirren goalkeeper into the top corner with his right foot. 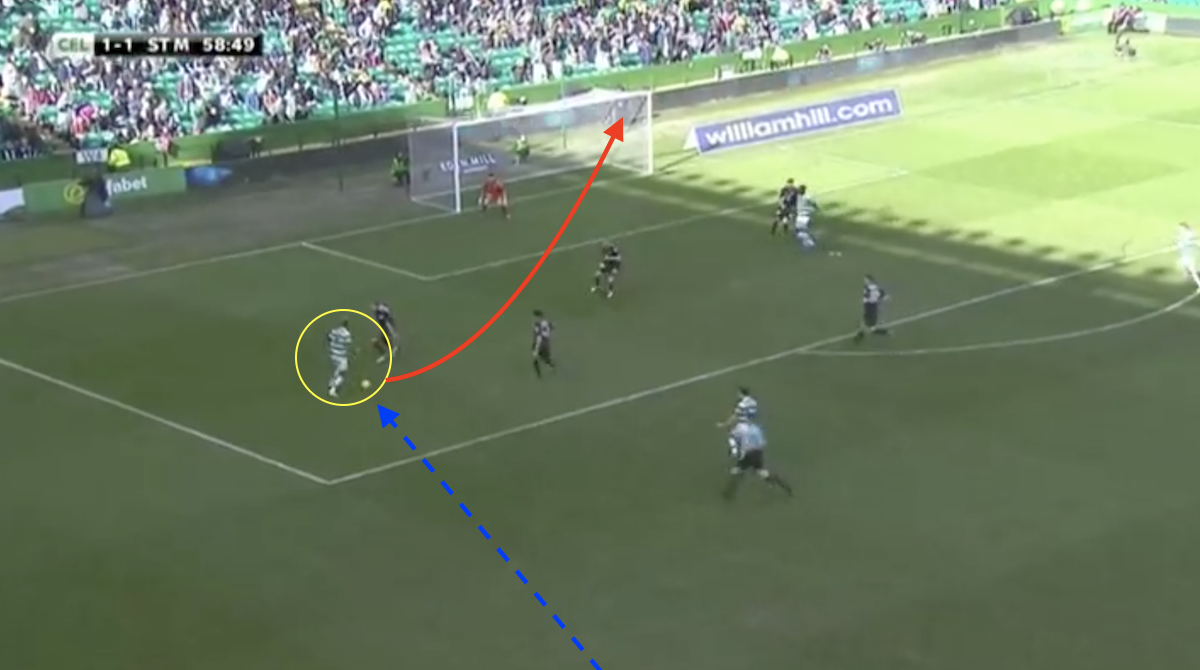 And it is a similar story against St Johnstone. Again on the counterattack, Sinclair glides into the box, stands up his man and tucks past the home keeper with minimal fuss to seal the win. 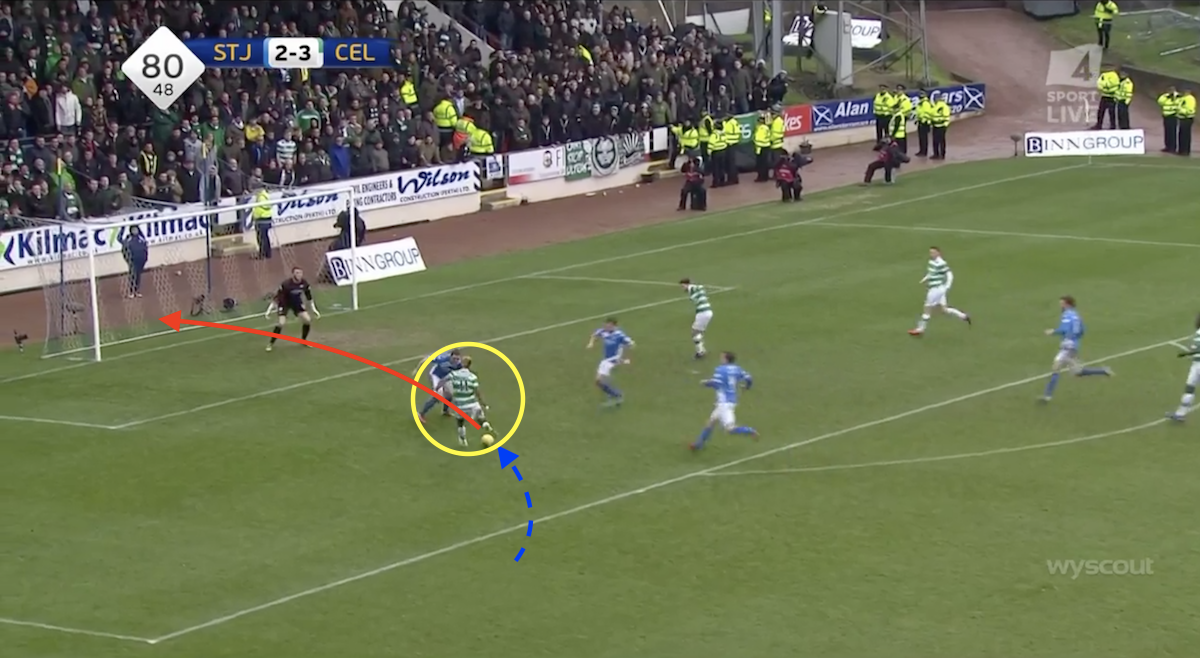 It is not only Sinclair though. Backup keeper Dorus de Vries played for Rodgers at Swansea and centre-back Kolo Touré was a Rodgers signing at Liverpool before following his former boss to Parkhead.

This season has been a good basis from which to build for Rodgers. With the Scottish League Cup in the bag and a Scottish Cup semi-final against Rangers in April, the Bhoys will be favourites for a domestic treble.

Two draws against Manchester City were the highlight of a campaign which yielded just three points. A 7-0 drubbing at Barça in their opening fixture was a reminder of the work still to be done.

Since exiting the Champions League at the beginning of December Celtic have dropped just two points – thanks to Clint Hill's last-gasp equaliser in the Old Firm at the start of March. Otherwise it's been 18 wins from 19 and a winning streak of 17.

This is the end of the beginning for Rodgers and Celtic. Next season there will be increased expectation that they will compete on the European front and he will have to deliver.