Life as Celtic manager couldn’t have gotten off to a worse start for Brendan Rodgers when the Hoops suffered the embarrassment of losing 1-0 to the Lincoln Red Imps – a semi-professional side from Gibraltar – in the Champions League qualifying second round.

It was the former Liverpool boss’ first competitive game at the helm of the Glasgow giants and it made him and the club the subject of widespread ridicule. The Red Imps are the dominant force in Gibraltar, with 22 championships to their name, but that will have been no consolation for Celtic fans when 35-year-old policeman Lee Casciaro’s goal threatened their participation in Europe’s premier club competition.

Though left red faced from the pride-stinging loss, the Bhoys regrouped and comfortably won the return leg 3-0 at Celtic Park. It was an inauspicious beginning for Rodgers, but it has since been confined to history as a minor hiccup rather than a cataclysmic disaster; Casciaro’s name will undoubtedly live on as an obscure football trivia answer for generations to come.

Celtic made it to the Champions League group stages by narrowly overcoming Kazakhstan Premier League champions Astana and Hapoel Be’er Sheva of Israel in the final qualifying rounds. 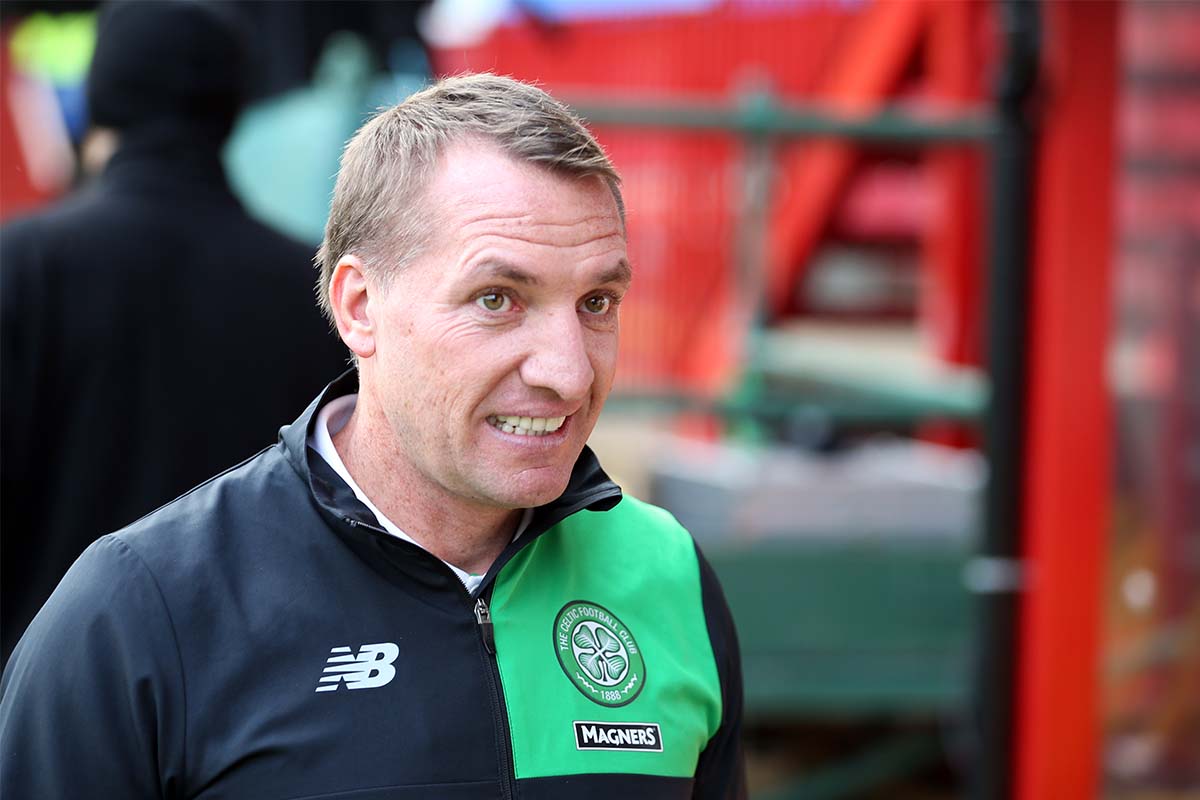 In doing so, Rodgers cleared his first major hurdle as boss of the Scottish Champions. In the current football landscape in Scotland, domestic success is par for the course for Celtic, having won the league title in each of the last five seasons, while also winning two Scottish Cups and two League Cups in the last five years.

But it will be Celtic’s progress in Europe by which Rodgers will be judged. The Hoops haven’t managed to successfully navigate the Champions League group stage since the 2011-12 season when they faced Juventus in the last-16, losing 5-0 on aggregate.

Now, no Celtic fan would realistically expect their side to contend for the grandest honour on the continent, but to see them elevated beyond the status of group stage also-rans would mark a step in the right direction.

This season, however, Rodgers can be forgiven for failing to achieve such a feat, having had the great misfortune of being drawn alongside Barcelona, Manchester City and Borussia Monchengladbach in Group C.

In their opening group game, Celtic had to travel to the Camp Nou to take on the Spanish champions. The odds were well and truly stacked against Rodgers’s men, and the former Swansea City manager, having presumably witnessed Deportivo Alaves upset the Blaugrana by using a similar tactic, set his side up in an ultra-defensive 5-4-1 formation.

The newly promoted La Liga side had earned a shock 2-1 win over Barça by defending deep and utilising the pace of Brazilian forward Deyverson on the counter-attack. With star striker Moussa Dembele as his lone forward, Rodgers wanted Celtic to do the same.

However, they didn’t get the chance to execute their game plan as Barcelona, and Lionel Messi in particular, were in superlative form and stormed to a 7-0 win. Dembele won, and then subsequently missed, a penalty with the score at 1-0, but had the Frenchman scored, it’s hard to envision Celtic being able to hold on for the remaining 65 minutes with Barça in such form.

Celtic’s next Champions League fixture gave Rodgers the chance to pit his wits against arguably the best manager in world football, Pep Guardiola, as Manchester City visited Celtic Park. And the Scotsmen picked up their first point of the group campaign thanks to a thrilling 3-3 draw in which 20-year-old Dembele proved himself worthy of being regarded as one of the hottest prospects in Europe by netting a brace.

Since then they have picked up one more point, away to Gladbach, but sit bottom of Group C with one game remaining, trailing the Bundesliga side in third place by three points, with no prospect of leap-frogging them thanks to an inferior head-to-head record. So tonight’s encounter against City at the Etihad, win or lose, will be Celtic’s last European game of the season.

On the domestic front, they remain unbeaten, with the 2-2 draw away to Inverness Caledonian Thistle the only blot on their Premiership copybook. Rodgers also claimed his first major trophy since assuming the Park Head hot seat by beating Aberdeen 3-0 in the Scottish League Cup final last month.

With Rangers returning to the top flight this season, the 43-year-old coach will also be judged on his ability to assert Celtic’s superiority in Old Firm derbies. The two Glasgow clubs have met twice for far this term, with the Hoops coming out on top on both occasions. 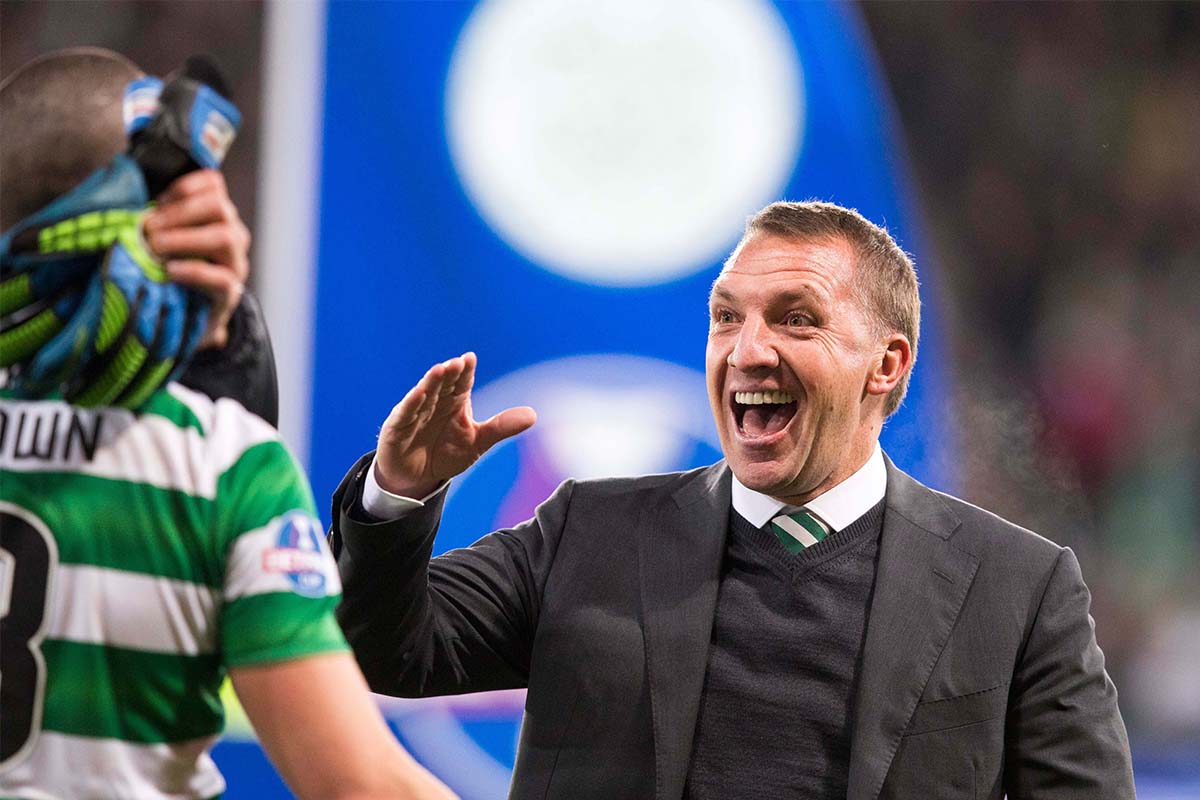 The first was an emphatic 5-1 demolition in the league at Celtic Park on 10 September, in which Dembele announced his arrival in Scottish football with a hat-trick. The next meeting came in the League Cup semi-final at Ibrox on 26 October with Celtic edging out their bitter rivals 1-0; Dembele was the hero once again having scored an 87th minute winner.

Rodgers is known for being tactically open minded, as evidenced by the various formations he employed – to varying degrees of success, it must be said – during his time in charge at Anfield. This aspect of the Northern Irishman’s style has again been apparent north of the border. Just last weekend, Rodgers made a mid-game switch to a 3-4-3 shape to help Celtic edge out Motherwell 4-3 in a back-and-forth encounter at Fir Park.

Though a 48th league championship is the minimum requirement for Celtic this season, Rodgers deserves credit for just how dominant his side have been. They sit top of the table, eight points clear of second-placed Rangers despite the Gers having played three games more.

He may have suffered an embarrassing start to his reign and the Champions League draw did him no favours, but Rodgers is making solid progress at Celtic so far this season. “My intention is to be here as long as I can, to help the club grow,” the former Liverpool manager said recently. “The most important thing for me is to be happy; It is about enjoying my life. I am living the dream.”