Avid Football Manager fans will be well aware of Breel Embolo. He burst onto the scene with FC Basel as a 17-year-old and was one of the best forwards to buy in the 2014 version of the game.

Unlike many wonderkids, Embolo lived up to his computer game billing in real life. He scored 17 goals in his first full season with the club and followed that up with 13 during his second campaign in Switzerland. Still shy of his 20th birthday, the Basel sensation was averaging a goal every three games across all competitions.

In the summer of 2016, Embolo was described by FourFourTwo as “one of Europe's hottest prospects”. He had the world at his feet and a queue of clubs looking to sign him. Borussia Dortmund held a strong interest in him but it was rivals Schalke who landed the Switzerland international in a deal rumoured to be worth around €20million.

It was a significant outlay for a teenager, let alone one with only two full seasons in the Swiss league under his belt.

His first goals didn’t arrive until October when he netted a double against Borussia Mönchengladbach. However, his season was over a week later. Fouled by Augsburg’s Kostas Stafylidis, Embolo fractured his fibula, his ankle and suffered an MCL tear.

Embolo didn’t return until September 2017. He slowly got back up to speed and ended up making more than 20 appearances in all competitions, but lacked that spark in the final third and scored just three times. He doubled that tally during the 2018/19 season but again missed a large chunk of the season, 16 games in total, after suffering a fractured foot.

In one of the surprise moves of the summer Schalke cashed in on Embolo – recouping close to half the fee they paid for him – by selling him to Bundesliga rivals Gladbach.

Former Red Bull Salzburg boss Marco Rose was appointed as head coach at BORUSSIA-PARK in the summer and he looked to reshape his forward line. Along with Embolo, they signed Marcus Thuram to offer competition to Alassane Pléa in the attack.

It’s not been the best of starts for Rose – BMG were thrashed 4-0 by Wolfsberg in the Europa League – but after the win over Fortuna Düsseldorf last week, Gladbach find themselves in sixth spot, just three points off leaders RB Leipzig. They’re going under the radar, just as Embolo is.

Along with Pléa and Thuram, the 22-year-old top scores for the team in the Bundesliga with two goals from his four starts.

Against FC Köln, Rose opted to start all three with Embolo occupying an attacking midfield role. One of his six slaloming runs from deep caused havoc and the move ended with Pléa passing the ball into the net for what turned out to be the winner. 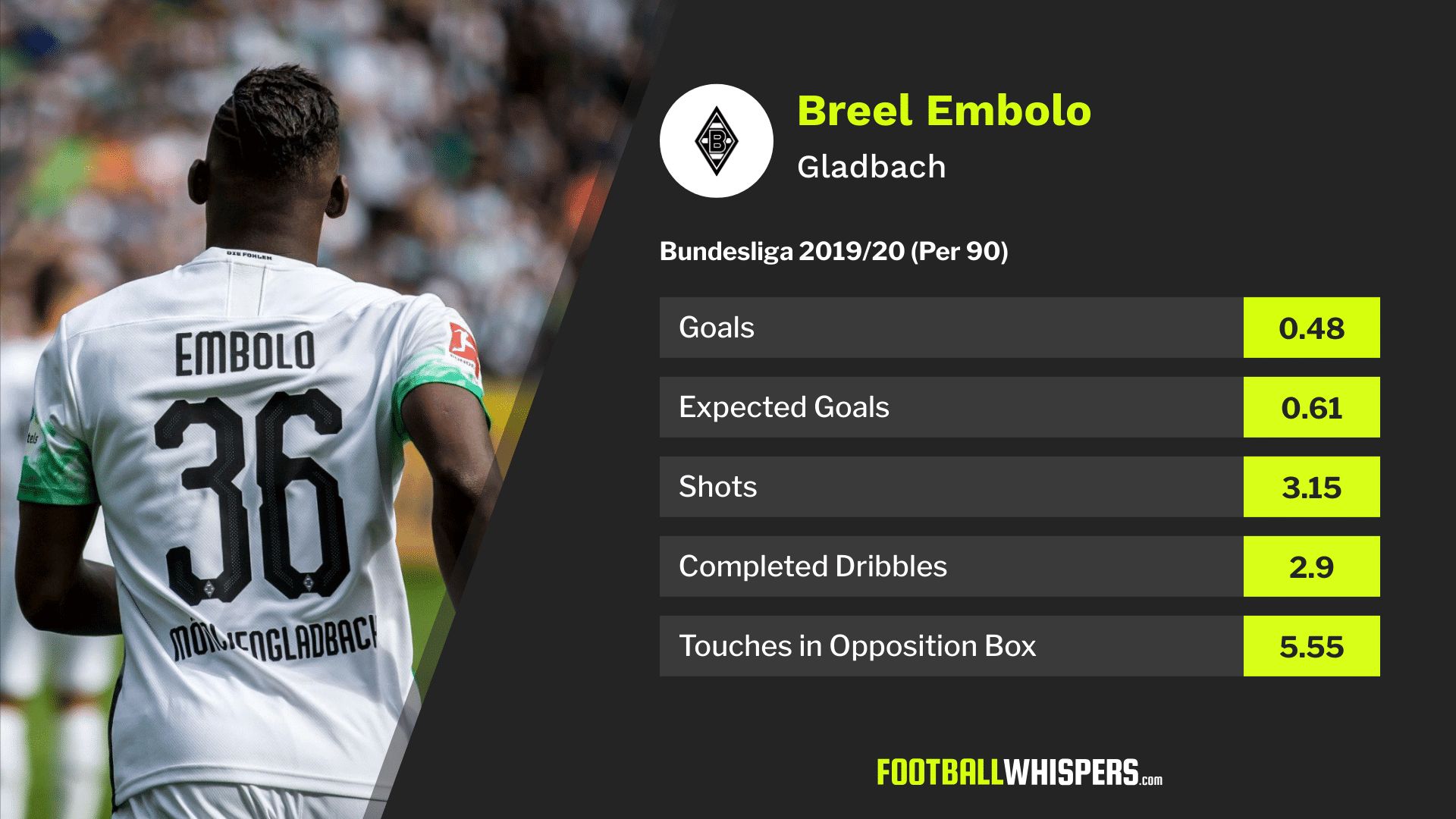 The Gladbach No.36 is slowly but surely starting to deliver eye-catching performances. He’s in a team which plays to his strengths and he appears to be enjoying himself along Thuram and Pléa.

The sample size isn’t the largest but, as things stand, Embolo’s expected goals per 90 total of 0.61 is the highest it’s been since he made the move to Germany. He’s taking more shots than ever before, too, registering 3.15 per 90. Last season with Schalke it was 1.72.

Many feared the Embolo who terrorised the Swiss league as a teenager was long gone. Ruined by injuries, it’s hard for any player to rediscover their form and reach the top level. Yet the 22-year-old is currently doing just that.

It’s even more impressive when you consider Gladbach are a team in transition. They’re still adapting to what Rose wants from his players while the new signings; Thuram, Embolo and Stefan Lainer bed into their new surroundings. The Switzerland international’s performances are a huge positive.

This could be the season in which Embolo gets his derailed career back on track. If he does, Gladbach will have a serious talent on their hands if they’re able to cultivate his skills. Their £9million investment could result in a huge return. He’s got the playing profile most of Europe’s elite would be interested in.