Manchester United got their 2017/18 Premier League campaign off to a flying start by thrashing Slaven Bilić's West Ham United 4-0 at Old Trafford on Sunday.

The Red Devils produced arguably their finest performance under José Mourinho and rubber-stamped their status as genuine title contenders with a dynamic attacking display.

Romelu Lukaku, a £75million summer signing from Everton, bagged a brace and added a mobile and powerful threat to United's frontline. But it was another player making his Premier League debut for the 20-time champions of England who stole the show.

Despite the Belgian striker's two-goal haul, Nemanja Matić, signed from Chelsea for an initial £35million earlier this month, was deservedly named man of the match for his his commanding performance at the base of midfield.

The 29-year-old silenced may of his doubters against the Hammers, breaking up opposition attacks, conducting play from deep and, as he was signed to do, freeing up record signing Paul Pogba to drift into attacking zones.

We've broken down Matić's stunning performance to see what it is exactly that he has done to transform the Red Devils in defence and attack.

With his all-action, supremely confident display in the drubbing of West Ham, Matić dispelled any fears United fans harboured over his perceived lack of mobility and athleticism.

The Serbian midfielder covered ground efficiently and effectively to snuff out opposition moves before they could progress to the point of danger, and demonstrated a deftness of touch and subtlety of movement that have perhaps been missing in his Chelsea performances over the last couple of years.

Matić has always be a grossly underrated passer, capable of dictating tempo deep in midfield and switching play with arrowing diagonal passes off his left foot – a trait that was in full view at Old Trafford on the Premier League's opening weekend.

No player on the pitch made as many passes as Matić (69), who returned a thoroughly respectable pass accuracy of 85.5 percent, demonstrating, as has always been his mode, he is a safe pair of hand in possession.

But it is the Serbian international's ball progression which will have caught many by surprise. Tasked with anchoring midfield and releasing Pogba into the advanced areas in which he in most effective, it is not enough for Matić to merely sweep up in front of the back four and hand off possession to a more gifted colleague via a simple, sideways pass.

Rather, any player occupying the role must be able to keep United moving forward when the possession is won, finding team-mates – be it Pogba or another of Mourinho's attacking charges – higher up the pitch.

This kind of ball progression has always been a key facet of Michael Carrick's game, the man the former Chelsea player has been brought in to replace in the side, who is a fine vertical passer over all distances. Matić exhibited a similar ability to push his team up the field against West Ham. 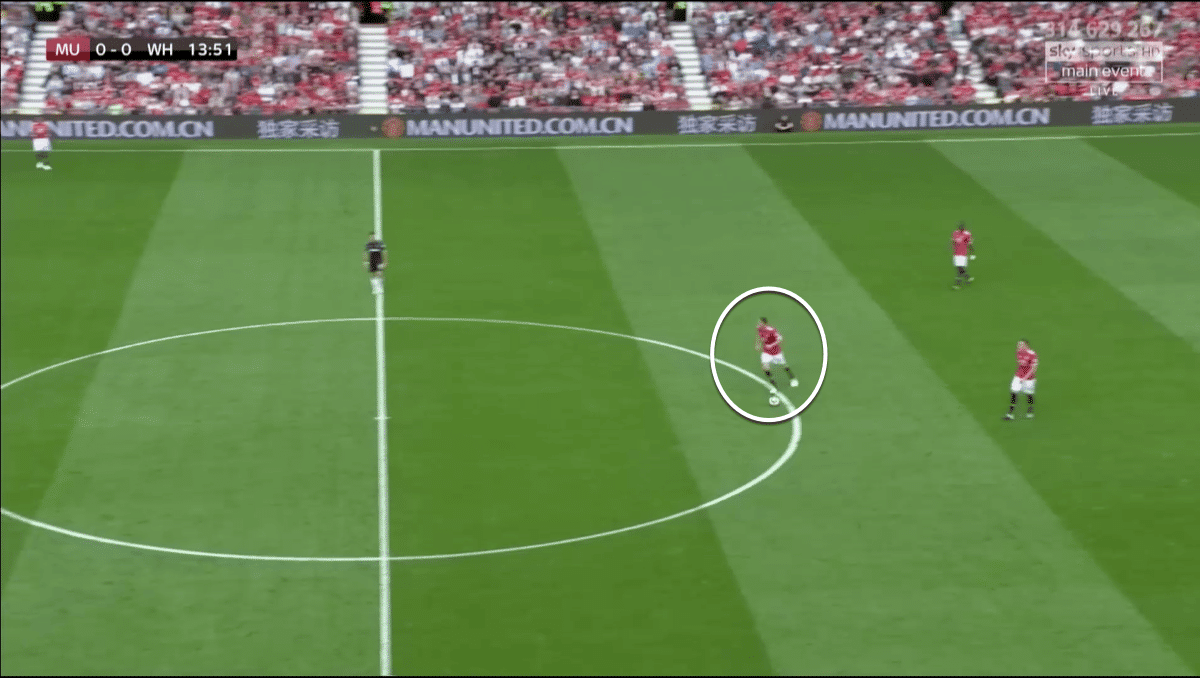 Here, we seem Matić collect the ball inside his own half with time and space. He could quite reasonably select a simple passing option to maintain possession and keep United safely ticking over, but he instead looks forward. 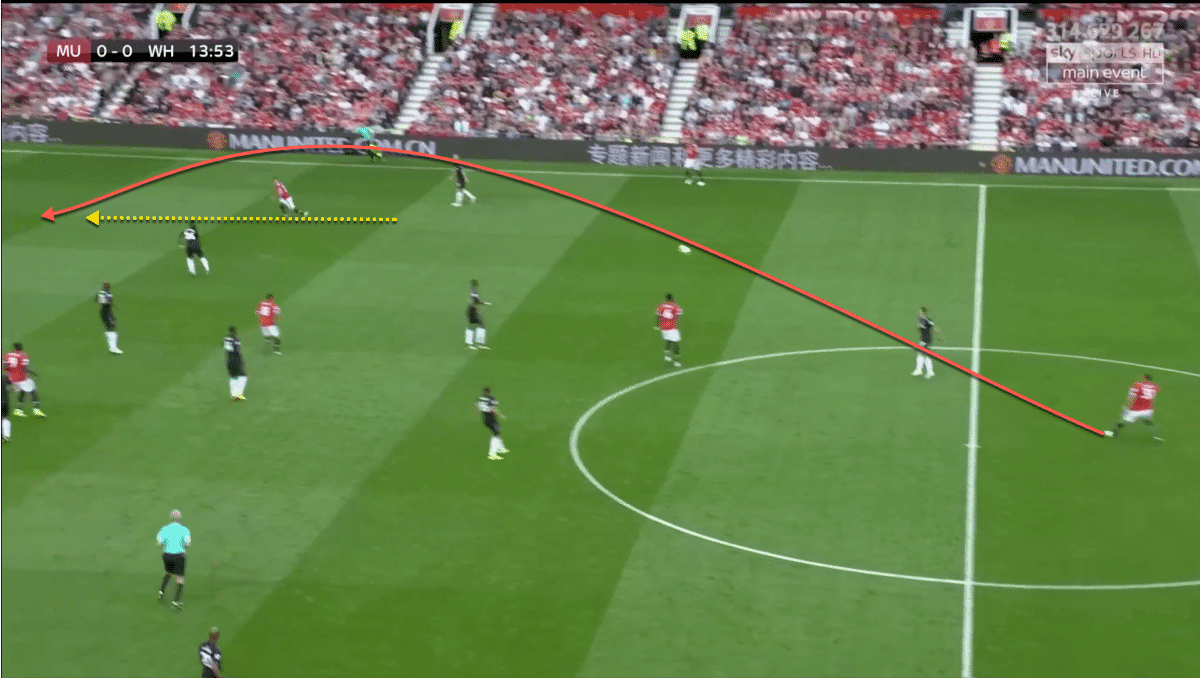 Spotting the run of Henrikh Mkhitaryan in the right channel, Matić picks out the Armenian on the edge of the West Ham penalty area with an inch-perfect, long-range pass, instantly moving United 50 yards up the field.

Ball progression can also take the form of long-distance dribbling, something that few would have assumed Matić to have in his locker. But the ex-Benfica man proved otherwise against the Hammers, completing more take-ons (seven) than any other player on the pitch.

As a defensive midfielder, dribbling through midfield carries a greater risk than simply pinging a long-range pass as, if possession is lost, the dribbling player is caught ahead of the ball, something far from ideal considering the protective remit of a midfield destroyer.

But Matić picked his moments expertly, taking on his opponent only in sensible areas and with adequate cover behind him. 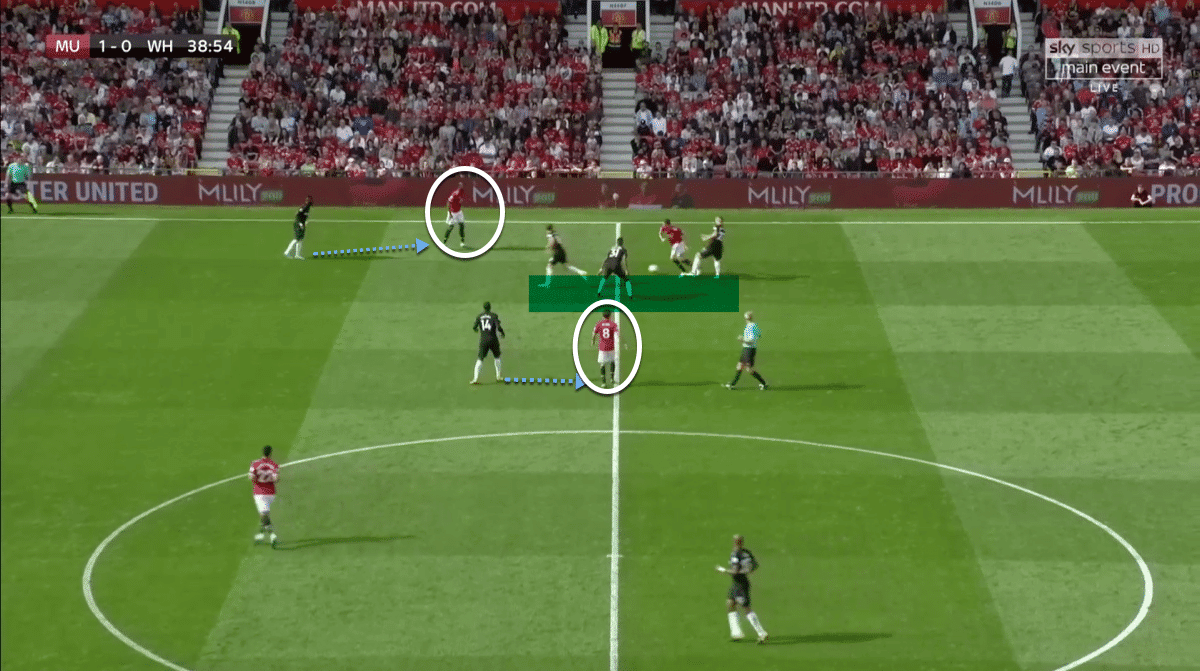 In the above image, we see Matić in possession on the halfway line, surrounded by three West Ham players and with his only two passing options well marshalled by the away side. 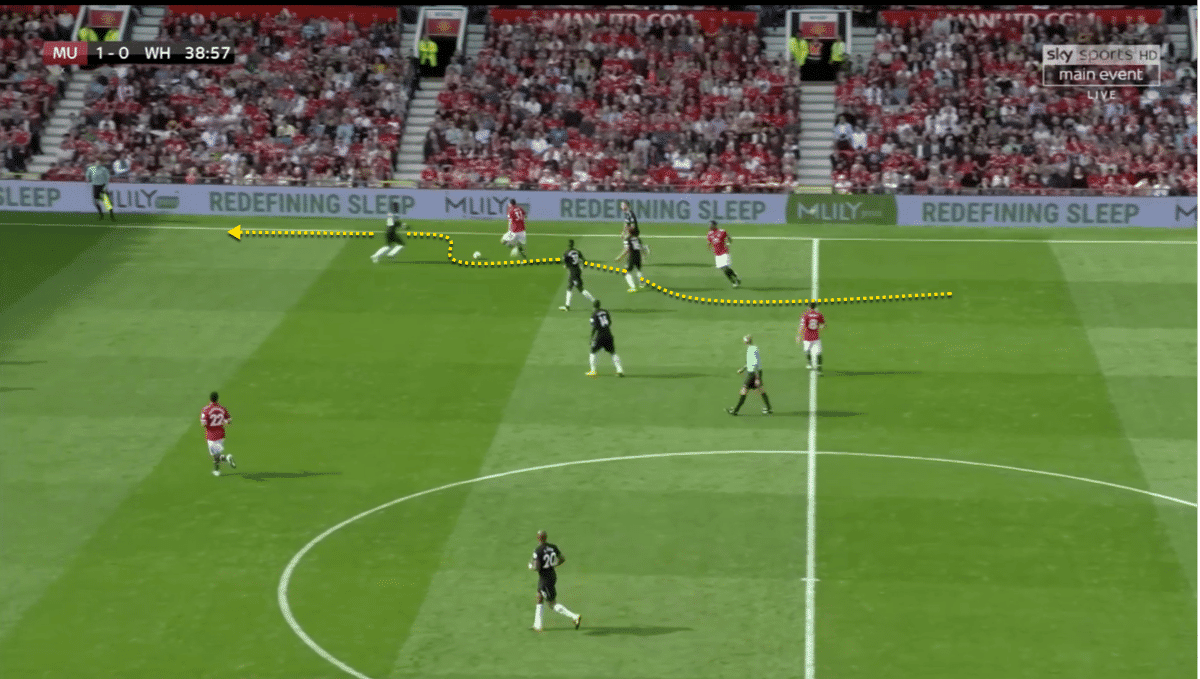 But he doesn't panic and sets off on a driving yet controlled dribble into space down the right flank, again carrying his side up the field, showcasing his deceptively quick feet, excellent close control and spatial awareness.

This kind of ability to break the lines of the opposition and quickly instigate an attacking situation for his side was crucial to United‘s ability to transition from defence to attack, something the Old Trafford side struggled with last season.

It has been well documented how Lukaku's pace and ability to play on the shoulder of the opposition's backline will be an asset to United's counter-attacking play, but Matić's speed of thought in transition will be equally key.

It is his defensive acumen for which the Serbian was primarily recruited, though. This side of his game, too, was in full effect against West Ham. The away team rarely threatened, meaning Matić was required to make just two tackles and one interception, but his flawless positioning ensured an easy afternoon for the Red Devils' defence. 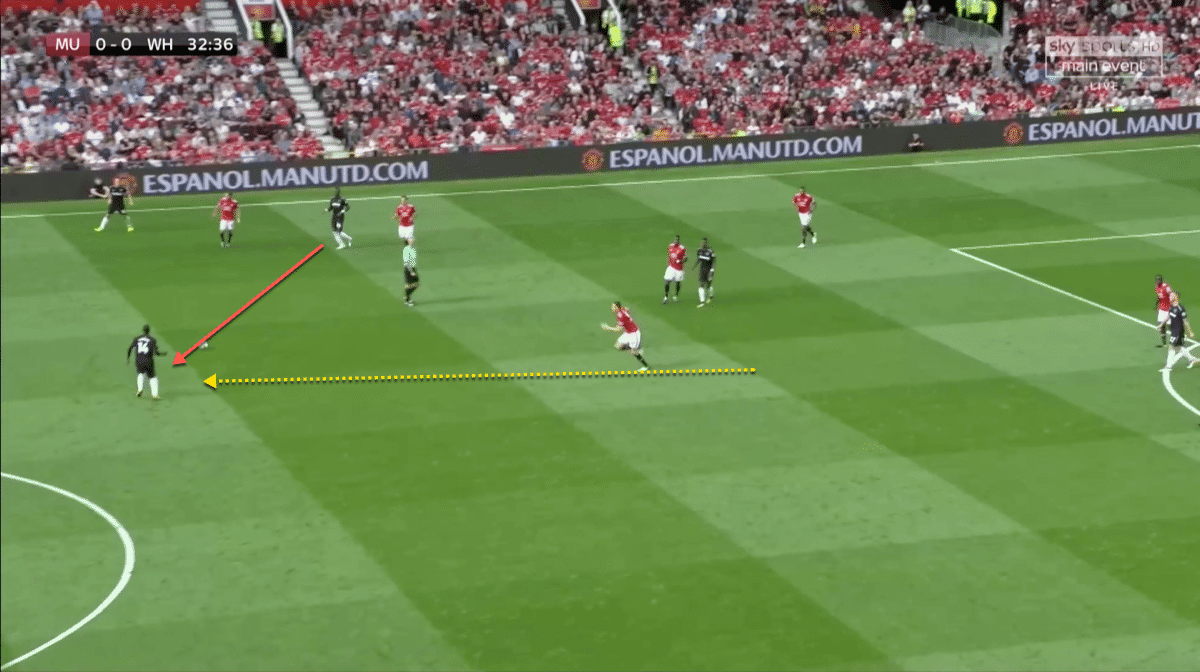 Here, we see Matić quickly reacting to a West Ham player receiving the ball in space in the midfield zone. He instantly moves from his station in front of the back four to close down the player about to receive possession. 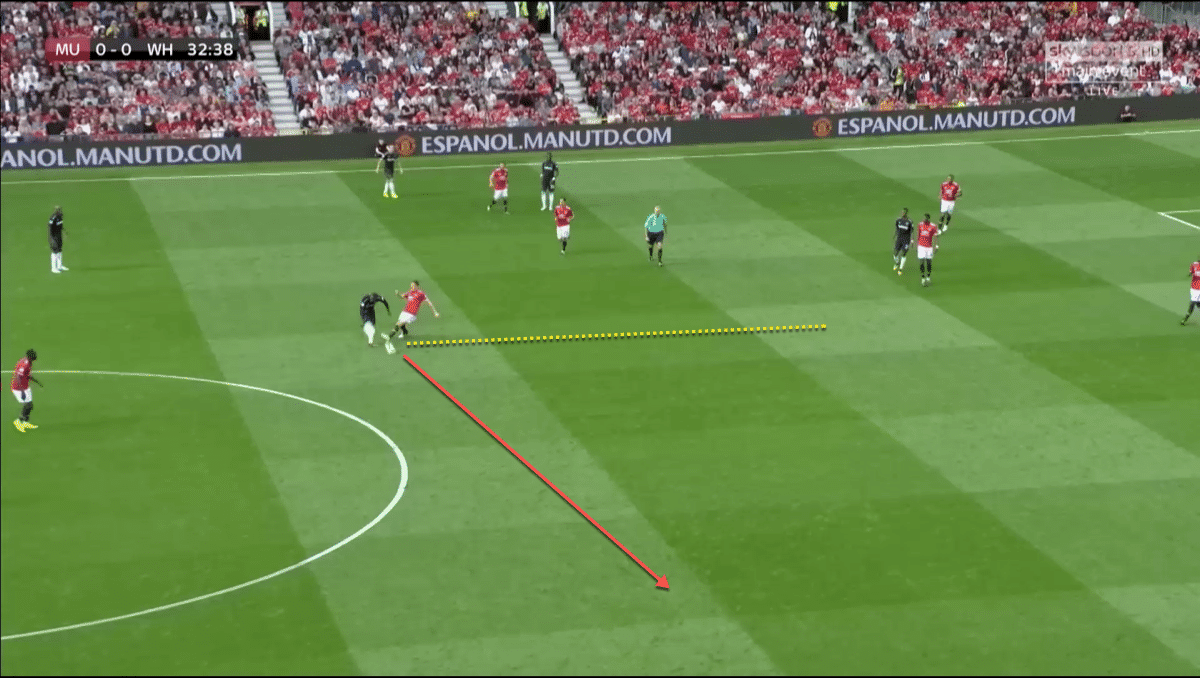 Without allowing the West Ham player to settle on the ball, Matić rushes his opponent into playing a pass that isn't there to be played, and the United man intercepts, with the ball fortuitously breaking for Marcus Rashford to launch a counter attack. 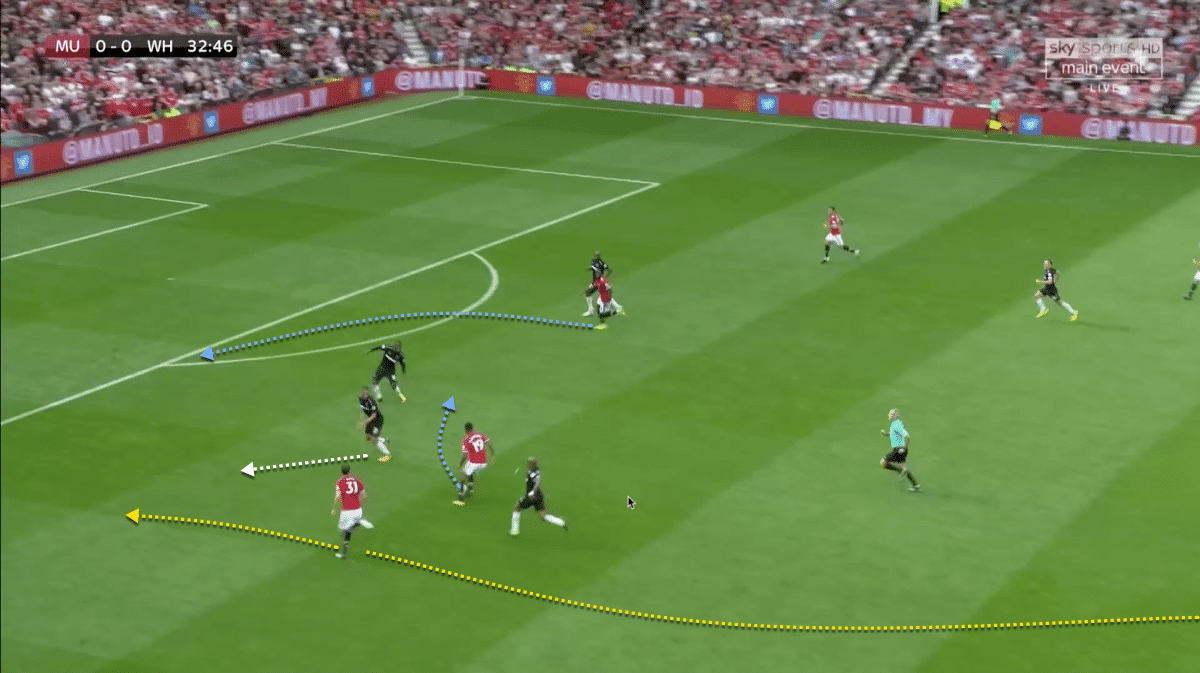 Rather than stand and admire his defensive work, however, Matić follows the play as it progresses. His run on the outside of Rashford gets Winston Reid's attention, pulling the West Ham defender wide and allowing the teenage United forward space to cut inside.

From there, Rashford releases Lukaku to open the scoring. A swift counter in which Matić played an integral part.

United's gain appears to be Chelsea‘s loss. What at first looked like decent business for the Premier League champions – recouping up to £40million for a player they has already effectively replaced by signing Tiemoué Bakayoko – now seems like an inexplicable decision to not only part with a key player, but strengthen a rival too.

Blues boss Antonio Conte has admitted his frustration at Matić's sale, while captain Gary Cahill has bemoaned the exit of a player of such quality, admitting: “He's going to be a huge loss, there's no doubt about that.”

Chelsea certainly seemed to miss Matić's experience and influence in midfield in their own opening fixture of the 2017/18 Premier League campaign, as they lost 3-2 to Burnley at Stamford Bridge.

It is only the first game of the season and one match is too small a sample size from which to draw any grand conclusions. But the early signs are good for United and Matić. If he can produce performances like that on a regular basis, the £35million fee will seem a bargain.