It was a saga that rumbled on for the best part of two years but Emre Can, while it's not yet officially confirmed, now finally looks set to leave Liverpool and sign with Juventus.

The polarising German has divided the fans ever since his arrival in 2014. The way he saunters around the pitch and the swagger he possesses when on the ball irks sections of the Anfield faithful.

He's forever giving off the impression that he's not giving his all purely because he rarely breaks into a sweat. While there are others who are prepared to look past the aesthetics of him as a player due to the impact he has on proceedings and, if anything, probably appreciate how easy he makes everything look.

However, even his fiercest detractors were bemused by the fact the club had gotten themselves into the position they found themselves in. He's a 24-year-old Germany international with over 150 appearances for the Reds and he's essentially been able to work the situation so that he was allowed to leave the club on a free transfer.

People often like to play the blame game and fingers will continuously be pointed but, in this instance, it's easy to see where both sides are coming from.

The club didn't make enough of an inviting offer to tie the player down to a long-term contract but continued to treat their No.23 as a key fixture in their starting XI.

The Merseysiders shouldn't be held to ransom but, at the same time, why would a player who played an instrumental part, with the captain out injured, in getting the Reds to a Europa League final, ensuring a top-four finish as well as a place in the Champions League, be prepared to accept an offer he deemed not good enough?

Replacing someone of his calibre with real quality was supposed to be a tricky and expensive task. Especially in such a volatile transfer market.

It appears Liverpool, however, didn't get the memo and, just 48 hours after a loss in the Champions League final, announced that they had signed Fabinho. The Monaco man had been named as a Paris Saint-Germain, Barcelona and Manchester United transfer target in the past but it was the Reds who snared him for just under the £40million mark.

Not only was it a ruthless statement to rival clubs, it was undoubtedly a message to players. In the past, Liverpool have moved individuals on and their replacements have been a tier or two below with the idea that they'll develop into a better option down the line.

This time it was different.

They didn't just replace Can, no, they signed an upgrade and without needing to break the bank. The Merseyside club are now a whole different beast in the transfer market and the way they identify targets is second to none.

If Can doesn't want to be part of the project at Anfield then Michael Edwards and the recruitment team will find a better player who does. That point has well and truly been made with the arrival of Fabinho.

Upgrading on Emre Can

The Football Whispers lab has a function which allows users to search for players who not only rank similarily in terms of overall ratings but are also stylistically a match. When setting search parameters up for Can replacements the closest player to him is Fabinho – a 98.3 per cent match. 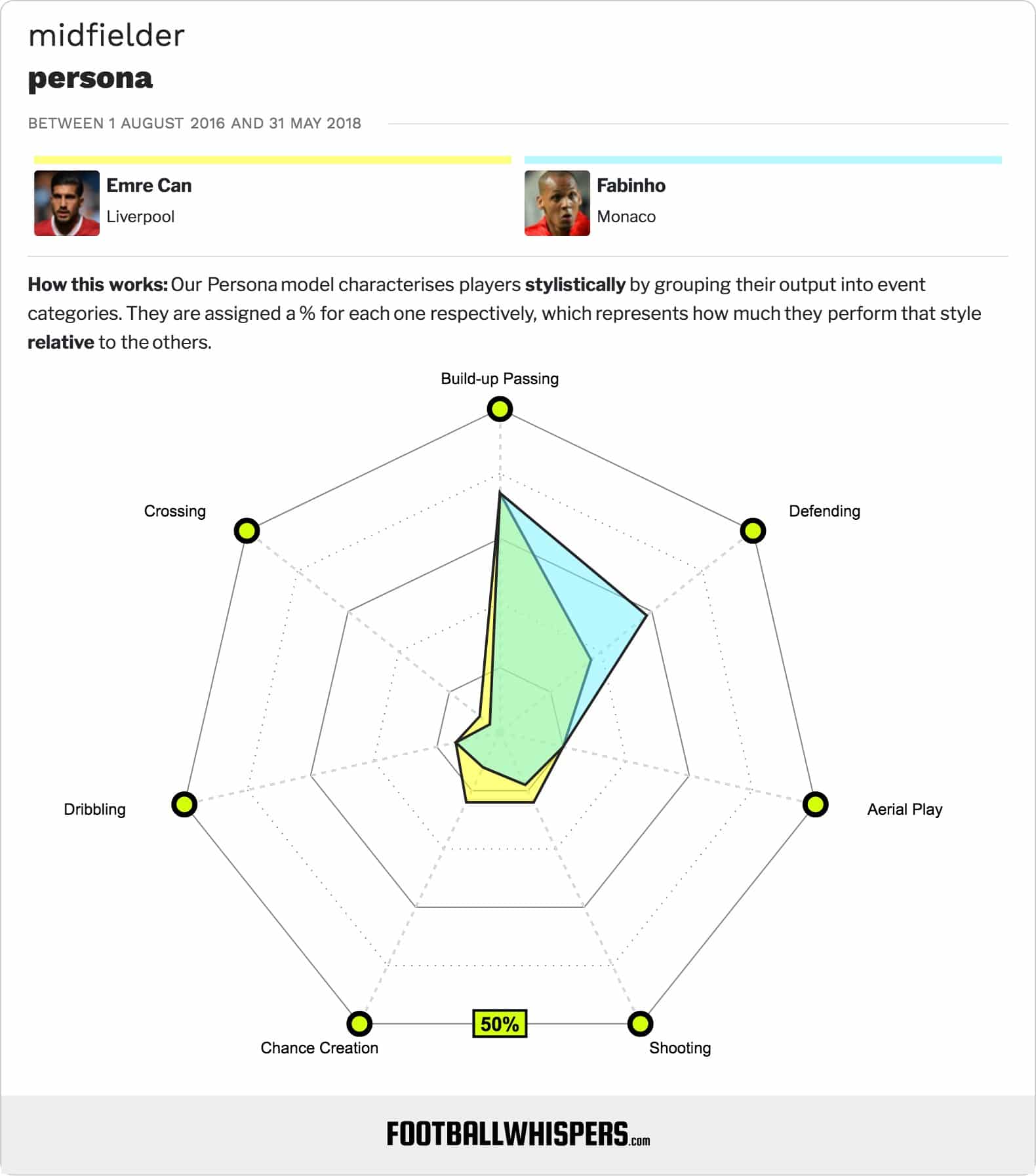 The Player Persona model, which can be seen above, paints a picture of two similar players. It's a visual representation of which traits have characterised Fabinho and Can over the past couple of seasons.

While not identical, they are eerily similar and it's clear why the Brazilian was viewed as a replacement for the wantaway German.

Both are heavily involved in build-up passing and lean towards defending and aerial play. Fabinho does more defensive work, while Can has an impact further forward, something highlighted by his radar edging higher up the chance-creation and shooting categories.

It is worth remembering, though, that Jürgen Klopp deployed his No.23 as a box-to-box midfielder at times with more offensive responsibility. This could account for the spike in the radar which he has and Fabinho, who sits deeper for Monaco in general, doesn't. That's stylistically, but what about statistically? 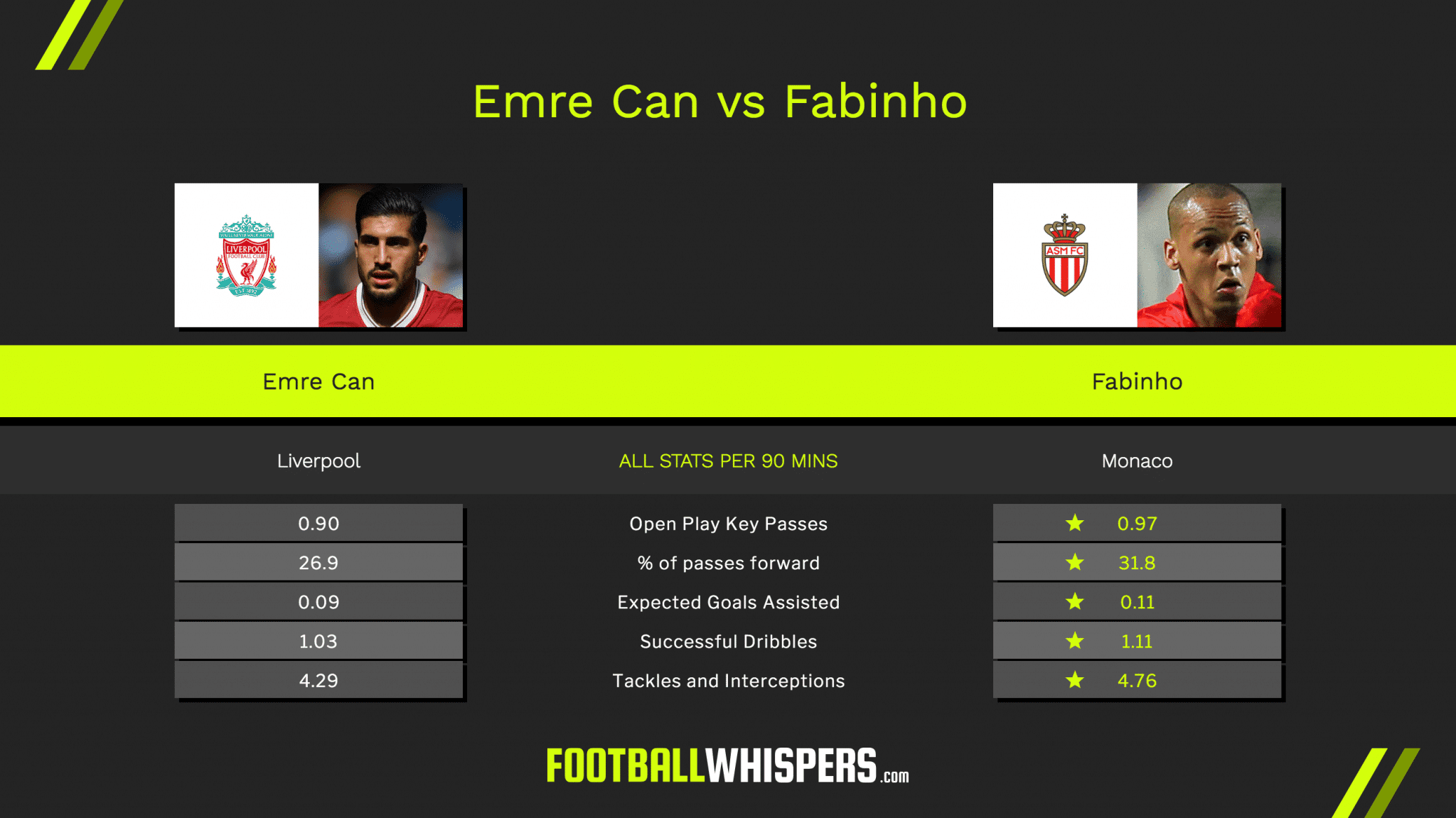 The leagues in which the two are playing in will play a part in the stats they're able to post and there's no guarantee Fabinho will post the numbers he did at Monaco during his time at Anfield.

Having said that, it appears that anything the German can do, the Brazilian can do better. The stats, taken from the 2017/18 campaign, show that Liverpool's newest signing averaged more open-play key passes and had a higher expected goals assisted number.

He also played more of his passes forward, possibly because Can was used further forward, and successfully completed more dribbles while winning more tackles and interceptions.

For added context, Can was in the top ten for midfielders in the Premier League with the most tackles and interceptions on a per 90 minute basis. He's no slouch in that area yet Fabinho is comfortably clear.

Fabinho wins 1.2 more headers per 90 and has a 66 per cent win rate, way up on Can's 46 per cent. The Brazilian also triumphs when looking at pass, long-ball and shot accuracy. There might only be a slight difference in most categories but they always favour the former Real Madrid defender.

Fabinho is an upgrade in every sense of the word and Liverpool have yet again played a blinder in the transfer window.