The biggest derby of South America will be played once again just a couple of days from now. So, if you want to learn more about the Brazil vs Argentina duel, check our detailed preview of the game.

Our best free tips and predictions for Brazil vs Argentina

If you want some help to find the right bet for the Brazil vs Argentina duel, check some of our top betting tips for this game:

The last five matches between Brazil and Argentina have ended without a draw – two of them were won by Brazil, three by Argentina, including the win in the Copa America final a couple of months ago. Still, Brazil is in better form at the moment since they've won all seven of their matches in the WC Qualifiers so far. Plus, they are playing at home, so our prediction is for Brazil to win the game.

Brazil and Argentina to Draw at Half Time

The match between Brazil and Argentina will certainly be a close one, so while we expect Brazil to win the game at the end, we don't expect to see an easy win. With that in mind, our next prediction is for Brazil and Argentina to draw at half time, even though this only happened once in their previous five duels.

All five most recent head-to-head duels between Brazil and Argentina have gone under 2.5 total goals, so there's no reason to expect anything different in their next matchup. That being said, Brazil averaged 2.71 goals per game so far in the WC Qualifiers, while Argentina averaged 2.57 goals per game in the first seven matches in the same competition.

The best odds and stats for Brazil vs Argentina

If you wish to bet on the best Brazil vs Argentina odds, check our list of odds from a few of the top bookies in the UK:

Brazil vs Argentina preview: A rematch of the Copa America final

The heartbreaking loss in the Copa America final against their upcoming opponent didn't slow Brazil down at all in the WC Qualifiers. The team with the most World Cup wins is on a run of seven straight wins in the qualifiers and they already have one foot in Qatar basically. Still, a win over their fierce rivals would further boost their morale and confidence, especially after that loss in the Copa America final.

This summer was great for Argentina since they managed to win Copa America and bring Leo Messi his first trophy with the team. To make things even sweeter, Argentina beat Brazil in the final match. Now, the two teams will play once again in the WC Qualifiers in which Argentina has four wins and three draws after the first seven rounds. This is enough for the second place, but a win over Brazil would bring them closer to the top. 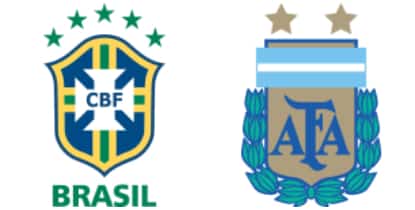