These are the best free Brazil vs Argentina betting tips and predictions. These are the best national teams in South America, and they will be meeting at the World Cup qualifiers at the end of March 2021 in Rio de Janeiro.

Brazil vs. Argentina will be a part of Matchday 6 of the 2022 FIFA World Cup Qualification in South America. The match will be played on the 30th of March 2021 in Brazil, and their next game will be on Matchday 14 (the 16th of November 2021) in Argentina. The two national teams are outstanding on their own and the best out of all South American teams. Playing against each other would be exciting and fun to watch. In the table below, you can see the best odds available for the event right now. Keep in mind that it's still very early, and we couldn't get specific odds for Brazil vs. Argentina match, but we did find outright odds for the World Cup winner. The odds were correct at the time of publishing; please check the bookmaker platforms before deciding to place a bet to see if there are any changes. 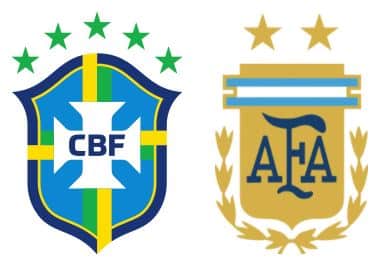 Argentina has some fantastic players on their team, like:

They are one of the top teams in South American football, and they have realistic chances of beating Brazil if they play their cards right. Luckily, the players don't have any injuries, and if they continue like, they will meet the reigning champions with the original squad. Argentina won three of the four matches they played in the qualifiers, and one game ended in a draw. Although oddsmakers think that Brazil has higher chances of winning, we wouldn't exclude Argentina just yet.

Brazil has some fantastic players on their roster, and their team is one of the best in the world. Some well-known names are:

Only two players on their roster are injured, and we don't have any information on when they will come back – Marquinhos and Allan. We believe that the Brazilian squad has a high chance of winning the match against their rivals Argentina. Brazil won all four of their most recent games in the WC 2022 Qualifiers, and although it will be tough, they have a high chance of winning against Argentina.

Our Top Betting Selections for the Match

These are the top selections we would recommend to you for the Argentina vs. Brazil match:

Double Chance is a safer type of wager that means you wager on two out of the three outcomes available. For example, the selections for the South American derby would be:

Usually, these markets have lower odds than match betting, correct score, and even some goalscorer markets. Still, the chances of winning are more significant, and you can add this selection into an accumulator or combination wager to increase your payout potential.

Draw No Bet eliminates the possibility of a draw, which means that you will be betting on two out of the three outcomes in the game, which increases your chances of winning. If a draw does occur, then your stake would be returned to you, and it would be like you never bet on the match in the first place. This bet type doesn't have the same appealing odds as other markets, but it's still prevalent.

Both Argentina and Brazil have great scorers to be proud of, and betting on them is exciting. The winner of the match and the number of goals don't matter when it comes to these markets. The only thing you will have to predict is who will score a goal and when. Here are the three most popular goalscorer markets available:

Of course, there are other possible selections, but they are less common among bookmakers. Some of them are:

Are you a fan of Brazilian football? Try tips for the Serie A Brasileirao division, which are regularly updated.