After winning their first matches in Group D of the Olympics, the Brazil U23 vs Ivory Coast U23 duel in the second round of the competition should be very interesting. If you want to know more about this game, read our preview of the match and get some free betting tips along the way.

While Brazil is the obvious favourite in this game, there are still many betting markets to be found and explored here. So, check some of our top betting predictions for this match:

The current holders of the Olympic title have shown that they mean business with a 4-2 win against Germany, the team they've beaten on penalties in the 2016 Olympics final. And while Ivory Coast also started the competition with a win, it was against Saudi Arabia, the worst team in the group. Brazil is simply much stronger than Ivory Coast, so our prediction is for Brazil to win this game by at least two goals.

As we already mentioned, we've seen six goals in the first Brazil game in these Olympics. We've also seen three goals in the Ivory Coast match against Saudi Arabia, so it's only logical to expect at least three goals in this game as well. After all, both teams obviously play attacking style of football, so that sounds like a good bet.

While Brazil dominated the game against Germany, they've also conceded two goals in that game. With that in mind, we think that Ivory Coast has a chance to score at least one goal against the reigning champions. Of course, Brazil should have no problems scoring in this game, so our next prediction is for both teams to score in this game.

You can find the best Brazil U23 vs Ivory Coast U23 odds right here, so check our list of top odds from various bookies:

The reigning Olympic champions have started the road to defending their title with a convincing performance against their fierce rivals and the finalists from the previous Olympic Games, Germany. Brazil won this game 4-2, with Richarlison scoring a hat-trick in the match. Including that win, Brazil is not on a streak of five straight wins in the Olympics, if we count their win on penalties in the 2016 Final as a win.

This is the first appearance at the Olympic Games for Ivory Coast since 2008, when the team reached the quarter-finals before they were eliminated by Nigeria. Ivory Coast is clearly an outsider in the group with the reigning Olympic champions and vice-champions, but the team started the competition with a 2-1 win against Saudi Arabia.

Commonly asked questions for Brazil U23 vs Ivory Coast U23 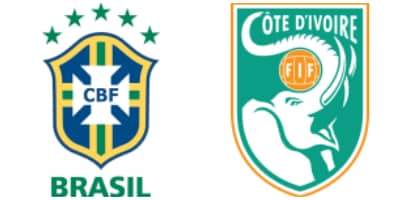