Brazil were one injury away from having a complete side for the World Cup. The injury suffered by Dani Alves in the week prior to kick-off in Russia changed that, though. It opened up a hole in their starting line-up that, two weeks into the tournament, has still to be plugged.

Danilo started the Selecao’s opening group game against Switzerland at right-back, but he was replaced by Fagner for the second fixture against Costa Rica. With Danilo injured for the final group match against Serbia, it seems likely that Fagner will keep his place, but this is far from a satisfactory solution for one of the tournament frontrunners.

The Seleção have yet to find their stride at the World Cup. They have still to lose, but they were far from convincing in their 1-1 draw against Switzerland and were made to wait until late on to make the breakthrough against Costa Rica in their 2-0 victory. Defensively, they haven’t really been tested, though.

That could change against Serbia, who have shown already at this tournament that they can cause problems.

Manchester United transfer target Sergej Milinković-Savić and Newcastle United forward Aleksandar Mitrović, in particular, will pose a question of Brazil that they haven’t been asked at this World Cup so far. Their defensive line will have to be well-drilled and sure of themselves to get the result required to make the last 16.

So what’s the difference between the two right backs Tite has at its disposal for this World Cup? Well, against Costa Rica Fagner saw a lot more of the ball, making 80 total passes compared to just 53 when Danilo played Switzerland in the opening group game. Of those 80 passes by the former, 75 were accurate.

But rather than reflect more of a willingness to involve himself in the general play, these superior statistics for Fagner could show how Brazil, as a team, controlled things against Costa Rica in a way they didn’t against Switzerland. Fagner may have benefited from his side’s dominance as a whole.

Instead, forward passes provide a greater illustration of the proactive, forward-thinking nature of both players and in this regard it’s Danilo who comes out on top, making 16 total forward passes against Switzerland as opposed to the 16 Fagner managed against Costa Rica.

Both players managed one successful take-on in each game. If Tite wants an attacking outlet down the right-hand side, a player who will look to hasten the attacking play of his side, then Danilo might just have the edge as things stand. 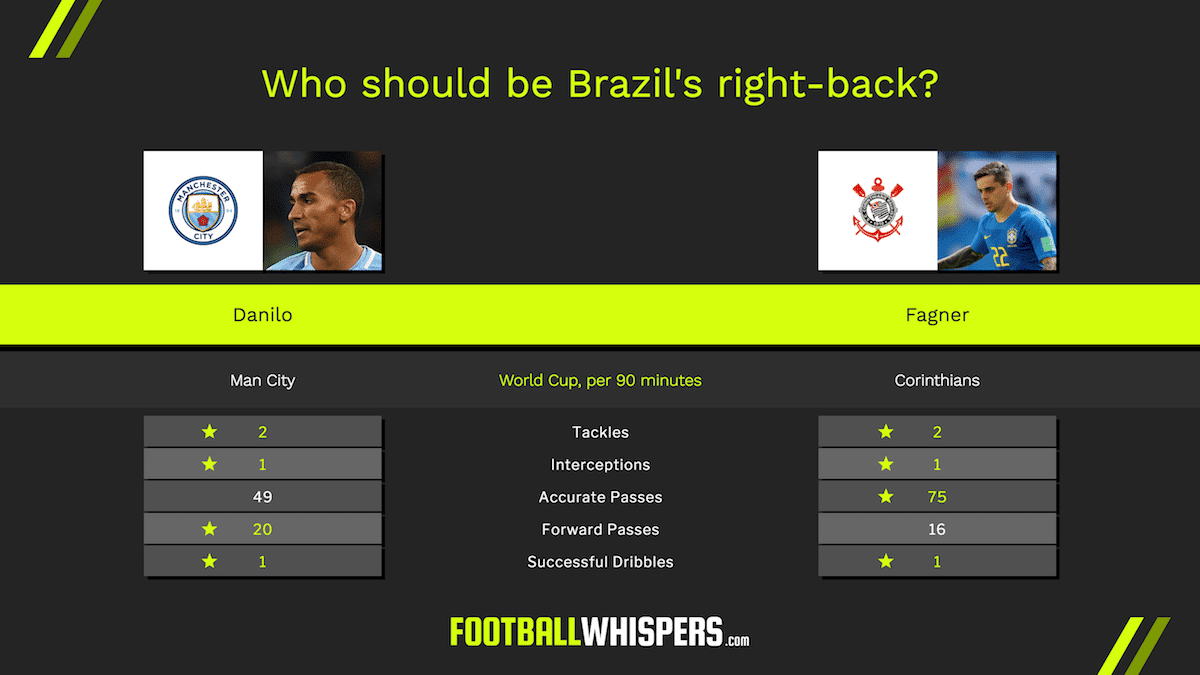 Right-back isn’t the only problem area for Brazil at the moment. In attack, they boast some of the best players at this World Cup, but Neymar still looks to be recovering his fitness having missed the last few months through injury in the lead up to the tournament. Without the Paris Saint-Germain forward firing on all cylinders, it will be tough for the Seleção to all the way in Russia this summer.

“There is an excessive responsibility [on Neymar] in terms of success and that is not the way to go, and the coach is not going to do that,” coach Tite explained in an interview this week.

“Each one of us has our own responsibility. We should not place it all on his shoulders, the whole group will solve it. Can he do it? of course he can, in some circumstances, yes.”

Tactically, though, the right-back hole is one that must be addressed. That is where opposition sides will target the five-time winners when they come up against Brazil in the latter rounds of the tournament, assuming they get that far.

It might be that they have to change system somewhat to protect their right-back, whoever it may be, but with Willian – an attacker with a defensive engine – already playing on the right there might not be much more that Tite can do.

Alves had held down the right back spot for Brazil for years before suffering an injury to rule him out of the World Cup. In fact, Fagner made just one appearance for the Seleção over the course of the qualification campaign, while Danilo didn’t make a single appearance.

Brazil, therefore, were largely unprepared for this and that is now manifesting itself during the tournament. They must hope quality elsewhere on the pitch makes their deficiency in this one position, otherwise it could hamper their whole World Cup campaign.