In recent months, Jack Hendry has endured a fall as rapid as his rise last season.

Released by Wigan Athletic in the summer of 2017, he quickly established himself as one of Scotland’s most promising centre-backs at Dundee before joining Celtic for a fee of around £1.2million in January.

However, his form quickly declined amid the unique stresses of playing for the country’s current dominant force.

The 23-year-old made his debut for the reigning Scottish Premiership title-holders in a defeat to Kilmarnock. Rather curiously, his personal nadir came against the same team in a 2-1 loss at Rugby Park on September 23. He was criticised for playing a part in both goals conceded – slow to react for the equaliser, then lost his man, Stuart Findlay, who proceeded to head home the winner from a corner.

Fans have taken to social media to criticise Hendry, with his defensive mistakes highlighted alongside an unwillingness to bring the ball out. However, both issues could quite easily be explained by team-wide and external factors.

Firstly, Hendry has not been allowed to settle in a position. He has been rotated consistently from the right side of defence, where he clearly does not belong, to various central defensive roles during his time at Celtic.

He is also not the only individual at fault for recent goals conceded – this term Brendan Rodgers’ side have collectively struggled to control games the way they used to. Finally, his jitters in possession are more to do with a poor attacking structure than any technical deficiency of his own.

Starting at centre-back in the crucial 1-0 win over Aberdeen last Saturday, he reminded onlookers of exactly why he was brought to Parkhead in the first place.

He read the game well defensively, making interceptions and winning the large majority of his duels. Arguably more importantly, he contributed a great deal offensively.

Celtic’s attacking play early on this season has been stunted by an uncharacteristic aversion to risk. This has been most overt in the centre-backs, who have often preferred sideways passes to through balls or forward runs.

Vitally, these problems weren’t visible against Aberdeen, a side who man mark rigidly in the defensive and midfield thirds, leaving one of the opposing centre-backs free.

Hendry was often the free man at the weekend and he used this status to good effect throughout the match. He frequently drove forward with the ball, committed defenders and progressed the attack. In doing so, he looked more like a Celtic centre-back than ever before.

In the graphic below he uses the time and space afforded him to push into the Aberdeen half with the ball at feet. As a result, he provokes pressure and frees up Callum McGregor, who is circled. He then finds Leigh Griffiths with a forward pass. 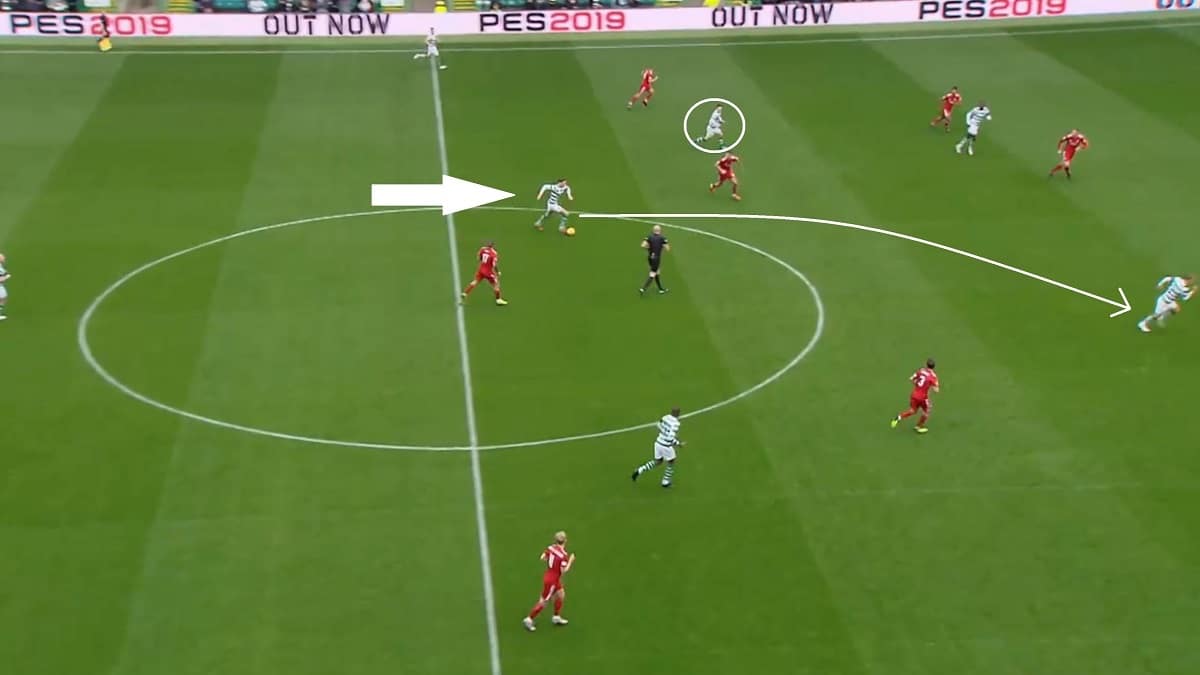 Later in the same game, Hendry looked to attack the space created ahead of him by Griffiths, who peeled off the frontline to receive.

Rather than simply pass to his more advanced teammate, the centre-back bets on his own skill and attempts to dribble beyond Aberdeen’s last line of defence himself, ultimately being fouled and winning a free kick. 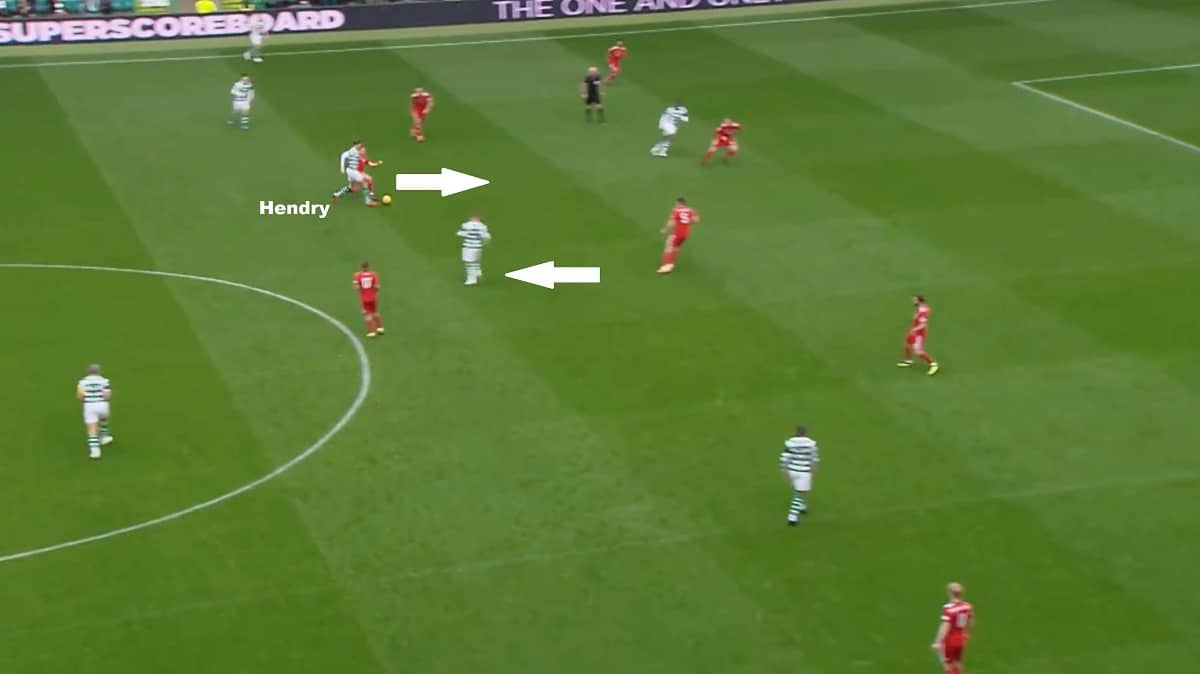 As well as progressive dribbling, the Celtic stopper was effective in his passing. Not only did he rarely miss his intended recipient but he penetrated the opposition block when the opportunity arose.

An example of this can be seen below, where he takes out two Aberdeen defenders with one through ball to James Forrest. 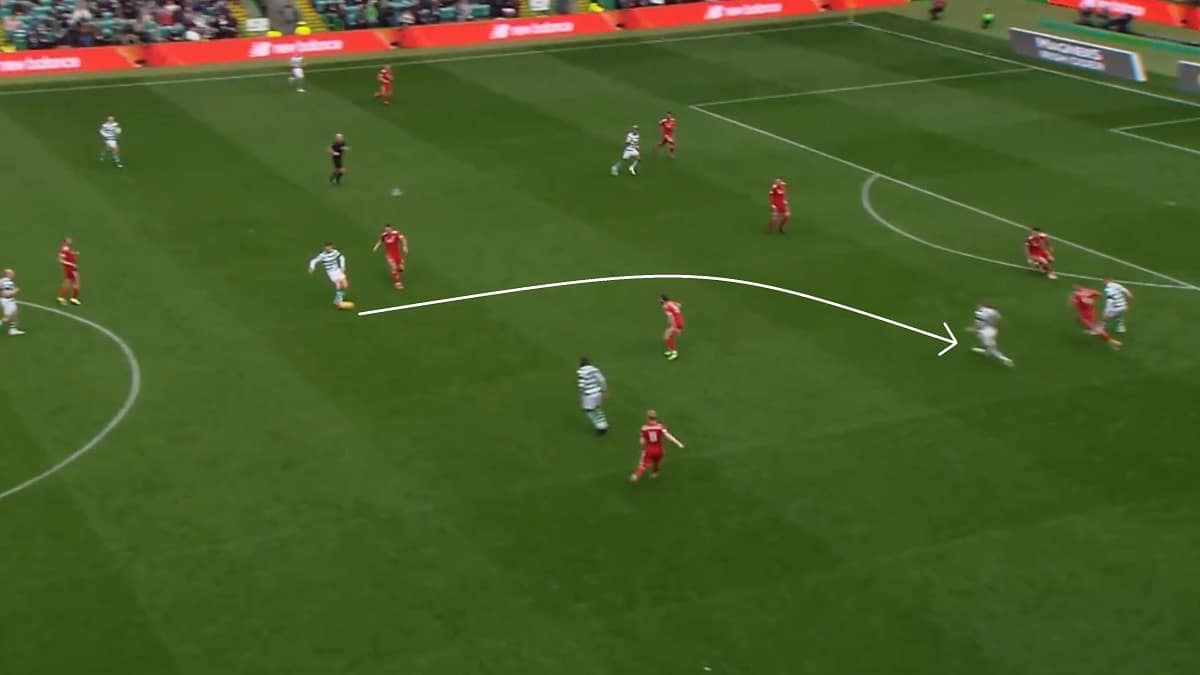 Hendry attempted more passes than any other Celtic player bar Dedryck Boyata against Aberdeen, and his completion rate of 98 per cent was higher than any of his teammates.

Alongside his bravery in possession, he was assured without the ball. Not only was he involved in more defensive duels than his more experienced Belgian defensive partner – nine to six – but he won 67 per cent of his duels compared to Boyata’s 33 per cent.

Hendry’s performance against Aberdeen was what Celtic have been missing from their centre-backs of late: he was aggressive and forward-thinking almost every time the ball came his way. His showing underlined why his manager thinks so highly of him.

“Jack is a player that, for me, he never goes missing,” Rodgers said recently. “He's a player that has come into a huge club and has seen the demands. He never shirks from it. He's had some terrific games, he's had some challenging games.

“But the beauty with Jack is he always puts himself out there, he never hides. It's very early in his Celtic career but he has a great attitude and I'm looking forward to seeing him develop over the next few years.”

Rodgers believes in Hendry and, judging on his display against Aberdeen, Hendry is starting to believe in himself. And, with his confidence back, he has the qualities to become the centre-back Celtic need.