Now a free agent following the expiration of his FC Porto contract, the 29-year-old should have a host of teams queueing up to sign him.

Why aren’t more teams involved in the battle to sign the midfielder?

Brahimi has an abundance of experience in Europe. He still has a good couple of years left at the top level and he’s extremely versatile, able to cover a number of positions throughout the middle and attacking third.

Here, we take a look at what the one-time Paris Saint-Germain academy player has to offer. 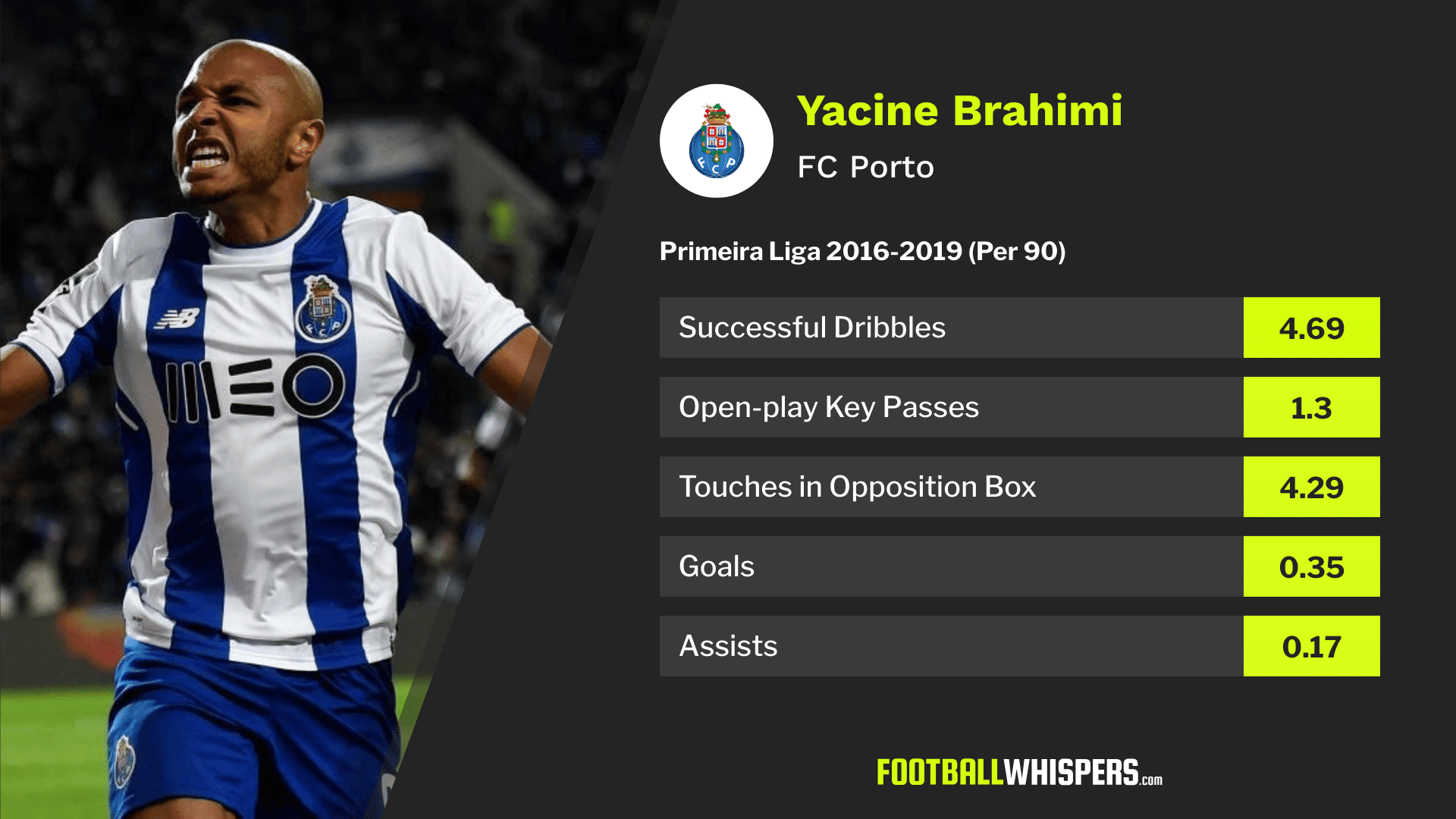 Over the past three seasons, Brahimi has been a reliable goal threat in the Primeira Liga. He's averaged 0.35 goals per 90 from an expected goals return of 0.22. Yes, he's overperformed but given he's done so over a prolonged period it really isn't anything to be worried about.

It simply shows he consistently exceeds his goal return which means a club can almost rely on this being the case. He chips in with assists, too, averaging 0.17 per 90, exactly on par with his expected assists average, but he isn't what you'd call a creative hub.

He's progressive and incisive. Firstly, he played 1.3 open-play key passes per 90. It shows encouraging use of the ball. However, the eye-catching stat is dribbles. He attempted 6.96 per 90 and completed 4.69 of them, in both metrics he was peerless in Portugal.

In fact, that average surpasses what Eden Hazard managed during his final season with Chelsea (4.35) while Wilfried Zaha completes just 3.35. It shows, to an extent, Brahimi is the sort of player who could thrive in the Premier League if given the opportunity to do what he's best at.

He makes things happen. He might not be the perfect fit for a single club but he's the sort of player who brings variety to a squad.

The Football Whispers Lab likens the 29-year-old to Watford‘s Roberto Pereyra. Just as with the former Juventus player, he's not someone who warrants a place in the starting XI of a top club. Not now anyway. But as a squad player, he's perhaps something of a wildcard and he'd be a welcome addition.

He could definitely do a job for Arsenal. Not only does he tick boxes in terms of playing style; an aggressor, all-action midfielder who doesn't shy away from defensive work, Brahimi is available on a free which is exactly what the Gunners need while they try to stick to a tight budget.

He could be the man to fill the void left by Aaron Ramsey‘s departure. He could also be the balancing act for a front three already consisting of Pierre-Emerick Aubameyang and Alexandre Lacazette.

Everton could find a home for him in their team, too. But with Gylfi Sigurðsson and Bernard already at their disposal, it's difficult to see where he fits in.

Manchester United need reinforcements this summer. Brahimi's versatility could see him star for Ole Gunnar Solskjær's men in a variety of roles depending on what formation the Red Devil's boss opts for.

He'd be ideal if they wanted to adopt more of a pressing game, similar to that of last season. The former Porto man, on average, regains possession in the middle third on 3.4 occasions per 90 and 1.9 in the defensive third.

He's not a sexy name arriving with a reputation but United, as things stand, don't need that. They need players who will perform in the system and Brahimi, having done that for Porto, can do the same for the Red Devils as they look to climb back to football's top table.

His stock may not be as high as it once was but the goalscoring midfielder could still be a vital cog for one of the teams in the top eight of the Premier League. He's worth the risk, especially on a free transfer.