This will be an interesting fixture because the hosts are looking for direct promotion while the visitors hope for a slot in promotion playoffs. We have prepared a comprehensive match analysis for this fixture.

Football Whispers Prediction Two-  Both Teams to Score: No @9/10

Note: Game odds change frequently so we urge you to visit Ladbrokes for the latest odds for Bradford vs Tranmere fixture. The above odds were correct are the time of writing. We also have more free tips in our England League Two betting section. Ladbrokes is our recommended bookmaker for this fixture

A fixture like this can be hard to predict which is why our pundits are tipping on goals is the best. It is an important game for both teams hence we expect a bare-knuckle from both ends. Bradford is 13th on the table and two only 4 points from promotion playoffs. On the other hand, Tranmere needs four points and two goals to displace Bolton Wanderers from the third position. Defensively, the visitors are better than Bradford having conceded only two goals in the last four games. Two of the three previous encounters between these teams ended with only one goal.

Both teams are fighting for promotion/playoffs. Thus, we also expect a cautious defensive approach from both ends. Moreover, the visitors lost 1-0 to Bradford in the reverse fixture and have registered two barren draws in two of their last four games. Because we also expect Bradford to fight back to winning ways after losing twice in a row, we predict a tense game with few goals on either side of the pitch.

Bradford to Score in First Half

Despite losing their previous two league games before this fixture, Bradford could find their back their way to victory against a side they defeated in the reverse fixture. It will also be interesting to see how Tranmere performs in this fixture having failed to score in their last three League Two games. The visitors have scored only once in their last five fixtures. The hosts have 7 goals in the last five League Two games.

The Latest Team Stats and Odds: Bradford vs Tranmere

Looking for more stats and odds for Bradford vs Tranmere? Check out the table below.

Will Bradford Collect Six Points from Tranmere this Season?

Bradford comes into this fixture with back to back defeats at Crawley Town and Harrogate Town. The hosts won the reverse fixture by a goal to nil on 26th December 2020. They come into this fixture with one mission; to get back to winning ways and hopefully break into the promotion playoffs bracket. In their previous fixture, Mark Trueman’s men lost despite keeping an even ball possession. They had 8 shots, four more than Harrogate Town.

Tranmere visits Bradford with no League Two victory in the last six games. They had three shots on target in the previous fixture at home against 11th placed Salford City. However, Tranmere did not find the net in a match that ended 0-0. Their lack of firepower up front was also evident against Walsall a week ago when they lost 1-0 after registering only 1 shot on target. Scoring only 1 goal in goal in the last five games demonstrates the visitors’ lack of firepower. Playing against a highly offensive side like Bradford in a few days could prove even more difficult in a fixture when a win is crucial for both teams. 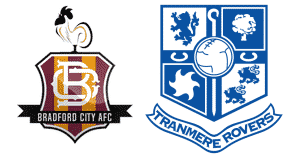 Bradford vs Tranmere Q &A

At what time will Bradford vs Tranmere kickoff?

Which team are we backing in this fixture?

We are giving Bradford a slight edge over Tranmere

Where will be the Match played?