With far too much emphasis placed on often meaningless tussles between a number of also-rans vying for Champions League qualification at the end of each season, it’s hard to believe the level of hysteria that surrounded the climax of the 1985/86 campaign; thanks mostly to the contribution of West Ham United and their ‘Boys of ’86.'

To be honest, the concept of West Ham fighting for the title going into the last week of the season was as incomprehensible back then as it would be today, as the club from the East End excelled themselves while treating the majority of their fans to the most exciting season in living memory.

As the 80s began West Ham United were a side who sat mid-table in the old Second Division of English football. They weren’t going to go down, but the thought of launching an assault on promotion to the top division seemed light years away, let alone nearly winning it.

John Lyall’s side had been relegated from the First Division just two years before and it looked as though they had found their rightful place in the footballing hierarchy, with little to fall back on other than a ground that was one of the most hostile in the country and an unbreakable team spirit.

It wasn’t all doom and gloom; in that first year of the new decade the Hammers had brushed aside West Bromwich Albion, Leyton Orient, Swansea City, Aston Villa and Everton to set up a meeting with Arsenal in the final at Wembley. The Gunners were hot favourites that day and few fancied United to do anything, but they rose to the occasion and ultimately lifted the cup courtesy of Trevor Brooking’s stooping header.

Cup success appeared to transcend itself into league form the following year as West Ham stormed the division, eventually winning the title by an incredible 13 points, ensuring they would be playing in the top-flight once again. 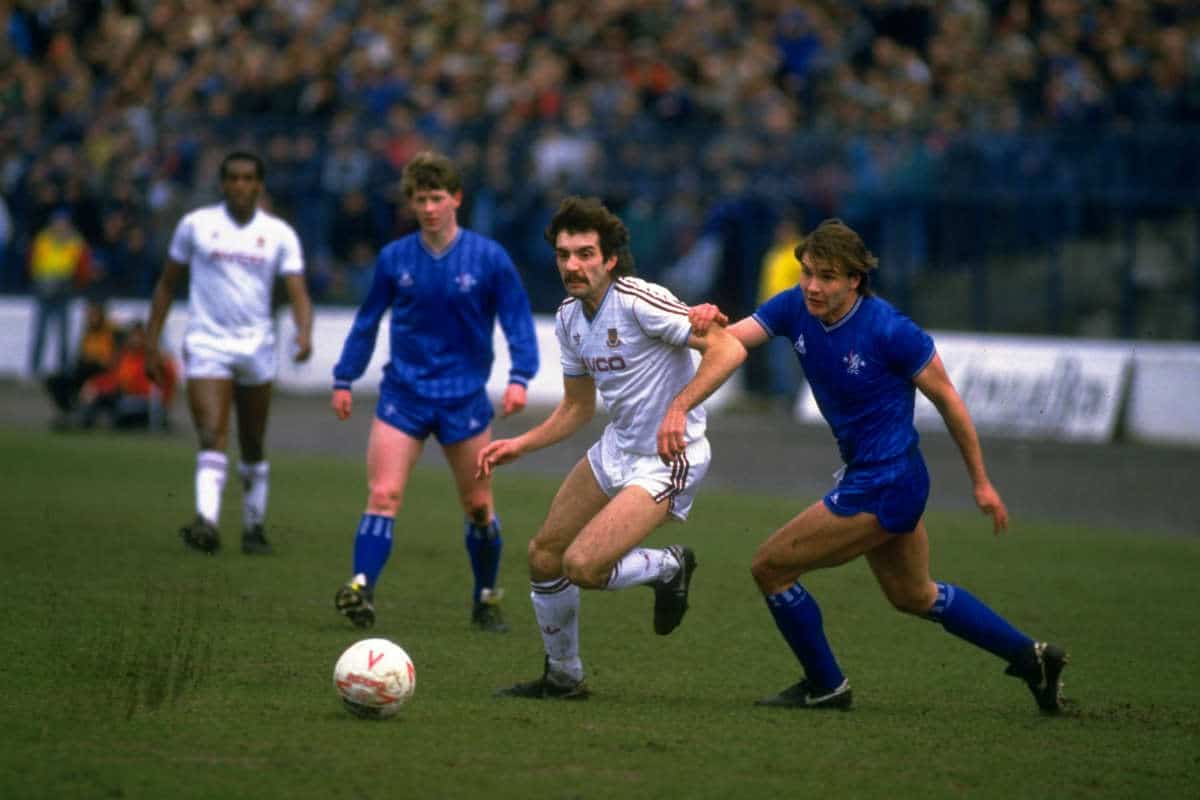 And it wasn’t just a flash in the pan. For the next three seasons the club would finish in the top half of the table quite comfortably, leading many to think something special was about to happen – but what, they couldn’t have imagined in their wildest dreams.

As the 1985/86 season dawned West Ham had the nucleus of a very good side. A young Tony Cottee had scored 17 goals during the previous campaign and with the addition of winger Mark Ward from Oldham Athletic, as well as attacking midfielder Frank McAvennie from St Mirren, they had every reason to be optimistic.

But when the season kicked off that August, things couldn’t have got off to a worst start. Not only were they beaten by newly promoted Birmingham, but Paul Goddard also broke his leg, a huge blow to a team who had little, if no, strength in depth.

Every cloud has a silver lining though, or so they say, and for the Hammers that would come in the form of Frank McAvennie’s contribution that season. With Goddard being out of action until March the soon-to-be fan favourite was thrust up front and would form one half of possibly the greatest strike partnerships of the decade.

To say it was a slow start to the season would be a huge understatement as the Irons only won one of their first five games when they beat QPR with McAvennie scoring his first two goals for the club, even so they were still languishing in 17th place at the end of the month, some way behind Manchester United who had won every game so far.

September brought with it something of a change in fortunes, though, as West Ham avoided defeat the entire month thanks to two wins and two draws that more than steadied the ship. By October they were up to seventh and things continued to get better as the nights drew in.

The Hammers won all of their five games in November, including a huge win over defending champions Everton. By the end of the month they were third and just five points off the top and clinging on to the coattails of a Manchester United side who had won their first ten league games and avoided defeat until October.

John Lyall’s team were now flying high. Having won only one game in the first seven by Christmas they were in a run of 18 games without defeat, which included nine straight wins. “The best team in the land” was how Joe Melling of the Daily Express described them as the likes of Cottee, McAvennie, Ward, Phil Parks, Tony Gale, Alan Devonshire and George Parris grew in confidence.

And things showed no sign of changing in the New Year as West Ham not only consolidated their league position, but also beat Charlton Athletic to progress in the FA Cup. However, their title hopes suffered a blow on January 18th when Liverpool beat them 3-1 at Anfield. They were now fifth in the league and seven points behind leaders Manchester United, though they did have a game in hand.

A huge turning point in the title race came in February when the Irons beat league leaders Manchester United at Upton Park as United were finally knocked off top-spot in the table after seven months, with Everton taking their place.

Incredibly, as well as chasing the First Division title, West Ham were also on course for a double when they faced Ron Atkinson’s Manchester United again in the FA Cup that March; having drawn at Old Trafford the Hammers won the replay 2-0 – but the double dream died when they went out to Sheffield Wednesday in the quarter finals.

If Christmas had threatened to be the most wonderful time of the year at Upton Park, April would be even better, not to mention one of the most memorable months in the history of West Ham United Football Club. Having lost to Nottingham Forest they then embarked on a run which saw them win eight of their next nine matches that put them right in the title mix. Perhaps the most incredible game that month, however, was their 8-1 thrashing of Newcastle.

The match was originally scheduled for March but was put back due to the cup clash with Manchester United in a fixture pileup which saw West Ham play four games in seven days. They were fifth in the table and ten points clear of their opponents that day, it looked like a formality, but nobody could have foreseen what was to come that night.

West Ham ran riot, putting eight past the Magpies, but the game will probably be best remembered for defender Alvin Martin scoring a hat-trick of penalties – against three different ‘keepers. His first spot kick was blasted past Martin Thomas, only for the regular goalie to go off injured and be replaced by Chris Hedworth. Martin stepped up to beat the stand-in ‘keeper and then completed his treble by slotting a third penalty past Peter Beardsley, who, by now, had volunteered to go between the sticks.

The win lifted West Ham to third in the table, four points off leaders Liverpool and they even had a game in hand, meaning it was all to play for as the season came to an end. On the final Saturday of the season West Ham were one of three teams to be in with a chance of winning the league, along with Everton, who had been in the driving seat since Christmas, and Liverpool, who had embarked on an incredible run of form to put themselves right in the mix.

The Hammers faced lowly West Bromwich Albion, Everton were at home to Southampton and Liverpool travelled to Chelsea. Lyall's men knew that if they beat the Baggies and the Blues triumphed at Stamford Bridge, they only needed a victory against Everton two days later to secure their first-ever league title.

West Ham did all they could, winning 3-2 at the Hawthorns, but as the final whistle blew news filtered through that player/manager Kenny Dalglish had struck the winner at Chelsea, a goal which sealed the title for Liverpool and the first leg of what would be a League and cup double, robbing the club from Upton Park of the chance of the most extraordinary of title triumphs.

Two days later the Irons would face fellow title rivals Everton in what was now effectively a play-off for a second place finish. They lost 3-1 and finished third after one of the most dramatic seasons in living memory. It was little consolation for the disappointed players, but West Ham also finished with the best home record in the First Division that season. Of 21 games they won 17 and lost only two.

Despite coming so close and with many top players at the time being lured to the continent, due to the fact that English clubs were banned from playing in European competitions, the nucleus of that West Ham side stayed at Upton Park to fight another day, though they would never come as close as they had in the spring of 1986.

“I will never forget those days as long as I live,” says former Hammer Tony Gale when reminiscing about that epic campaign.

But in subsequent years West Ham have been unable to reach such dizzy heights, suffering the agony of relegation on a number of occasions, not to mention the delight of promotion back to the big time. They’ve also left their beloved Boleyn Ground in Upton Park.

But for a generation of fans who were lucky enough to watch the side that become known as the ‘Boys of ’86', they can at least look back fondly at the time they went into the final weeks of the season able to sing: “we’re gonna win the league.”