There are certain footballers who make the game look effortless. They glide across the pitch, weaving together artistry and efficiency without so much as breaking a sweat.

Ryan Fraser is not one of these players. The Scot, who stands 5ft 4ins, scuttles with the ball, his legs moving twice as fast as the majority of his opponents. Yet his energetic, almost terrier-like style, has seen the Bournemouth winger blossom into one of the Premier League's most threatening players.

And that is one of the true beauties of football. There is no prototype professional. They come in all shapes, all sizes. While 6ft 2ins Cristiano Ronaldo is a physical marvel, 5ft 7ins Leo Messi is an unrivalled genius with the ball.

Fraser, obviously, isn't at the level of either. However, his progression over the past three seasons in the Premier League is yet another victory for the little guy. And it is also testament to the excellent work of Eddie Howe, one of the finest coaches in English football.

When Fraser arrived at Bournemouth at the age of 18 years old, by his own admission, he wasn't prepared for life away from home. The self-proclaimed mummy's boy couldn't cook so ended up living on a diet of takeaways.

“I put on a bit of weight and it used to affect my football,” he admitted in an interview with the Guardian in January 2017. “It all stemmed from Aberdeen. I used to have Domino’s all the time and ice creams from Baskin Robbins.”

Howe was quick to correct the problem. “He said to me: ‘You’re not playing for me again until you work all this crap off.’”

Fraser, who is affectionately known as Wee Man, played a small role in the Cherries' promotion from League One in 2013 and while he featured regularly during their two seasons in the Championship, he was largely used as an impact substitute.

The winger has said that was because of his lack of fitness. While he could be devastating in short bursts, he didn't have the stamina required to last 90 minutes.

Yet the club's promotion to the Premier League sharpened the mind. Fraser returned for pre-season training in the summer of 2015 fit and focused. But before he'd even had a session with the first-team, Howe informed him that he would be spending the season on loan at Ipswich Town.

“Ipswich was hard for me because it was Bournemouth’s first season in the Premier League,” he explained.

“I got on with it and it turned out to be massive for me because Mick McCarthy did me the world of good. I don’t think I really believed in myself when I first went there, but he changed everything.”

With a newfound level of confidence, Fraser returned to Bournemouth the following season. Howe, though, integrated him slowly.

He featured in only two of the Cherries' first eight Premier League matches. Three substitute appearances would follow in the next five. And then came Liverpool.

With Jürgen Klopp's side leading 2-0 early in the second half, Howe turned to Fraser. It was the winger's coming-of-age moment in the Premier League.

He teed up Bournemouth's first goal, scored their second, and created their third. A last-gasp winner from Nathan Aké saw the south coast club defeat their illustrious opponents 4-3.

At full-time Howe came onto the pitch and hugged Fraser, but he also delivered a message: “He said, ‘This is your time to kick on because you’ve got all the confidence in the world now. We can see what you can do.'” 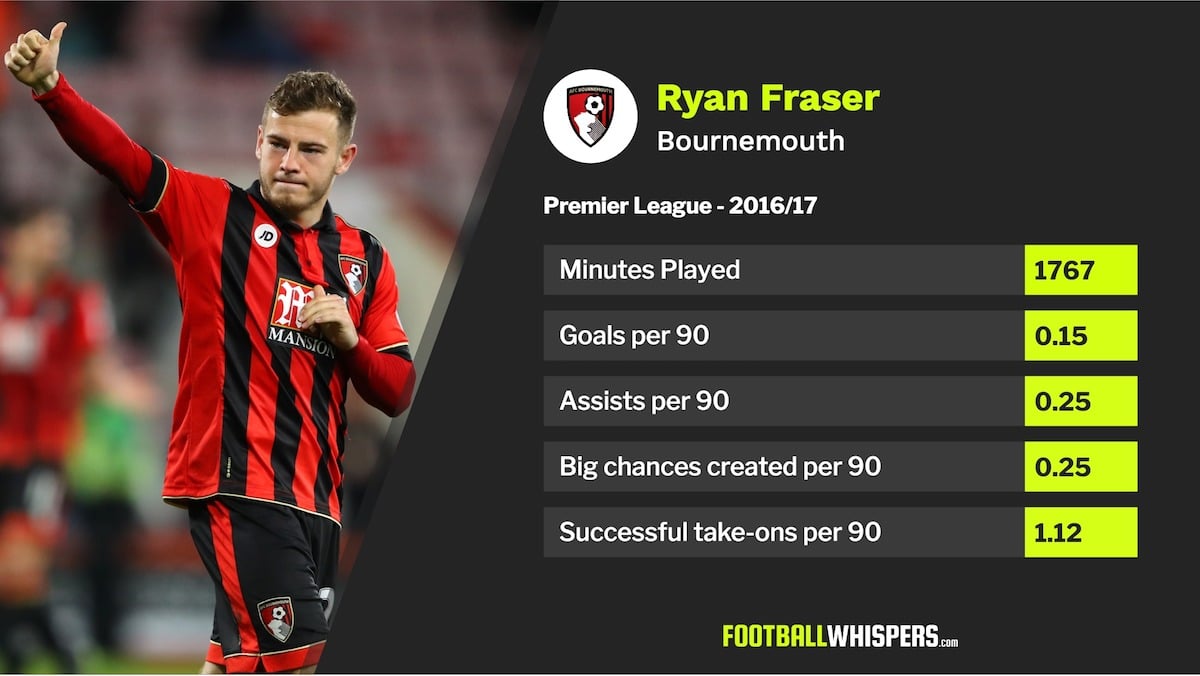 Fraser did just that. He only missed two Premier League games during the remainder of the campaign and ended the season with three goals and eight assists in the top flight.

Last term Fraser was expected to take the next step in his development. And he started well. By the end of January, he'd netted four goals.

But injuries to the Bournemouth defence – mainly at full-back – forced Howe into a reshuffle. Fraser was used as a stand-in right wing-back for much of the second half of last season.

“Not many players at Bournemouth could play there, so I sacrificed my own needs,” he told The Times. 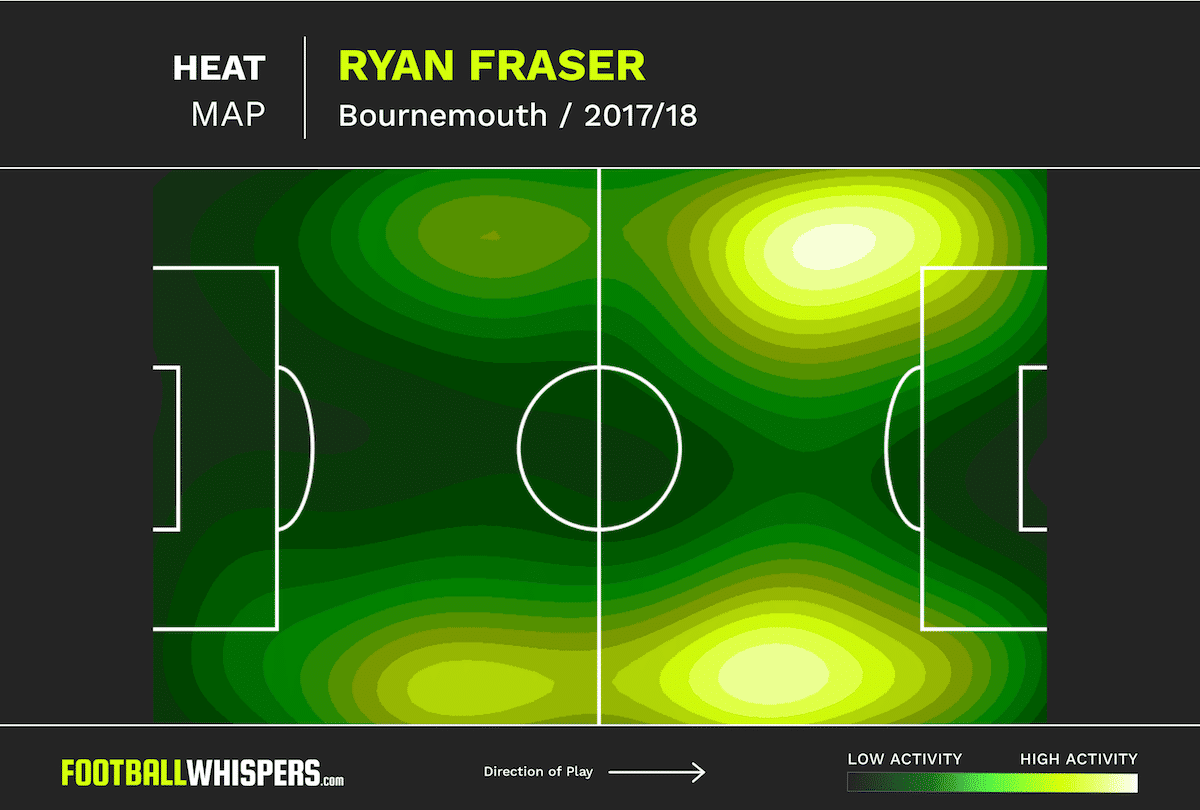 “We spoke at the end of the season and Eddie Howe was grateful for what I’d done, but we agreed that long-term, it’s definitely not my position.

“Left midfield is my preferred position. It’s where I’ve got all my goals and assists over the last three years.”

And that's where he's returned to this season.

Fraser has been used exclusively on the left flank this term by Howe and it's paid off handsomely.

The Scotland international already has four goals to his name and has racked up six assists in all competitions. And his underlying numbers are just as impressive.

According to data from the Football Whispers lab, no player in any of Europe's top five leagues – the Premier League, Serie A, La Liga, Bundesliga and Ligue 1 –has created more big chances than Fraser (12) this season. Neymar is second with 11 while Messi is third with nine.

He is joint fifth in the Premier League for open play key passes (15) and, unsurprisingly given the previous two stats, his xA (expected goals assisted) of 3.15 is only bettered by seven players in English football's top flight.

“This season I have tried to make more of an impact than I have in previous seasons. I’m trying to be the main man,” he said in September.

“I’m 24 now and I think if I want my career to go where I do then I have to step up instead of letting the big players change the game. I want to be the one to change games.”

Fraser is doing just that. Year on year he has improved his game, for which he and Howe must be commended. But you sense the best is still to come.

For Bournemouth's Wee Man there are still greater heights to reach.